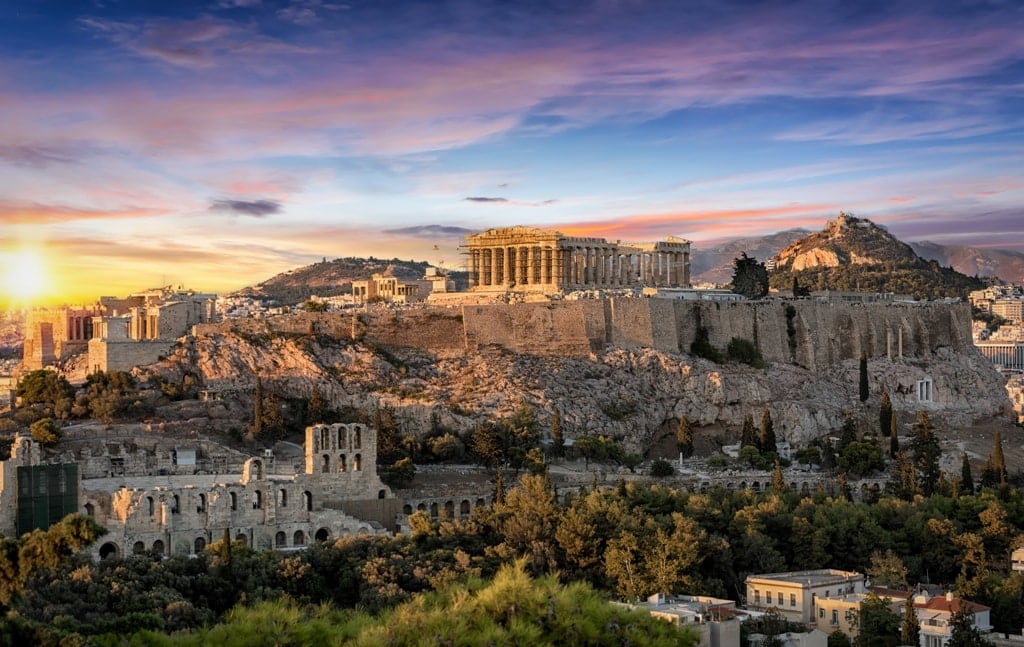 Greece is one of the oldest countries in the world, along with China, Egypt, Iran, Ethiopia, Japan, and India, to name a few. Its history is vast, and its people live and breathe it. When you come to Greece, you too will be surrounded by it, imbued by its culture and heritage, which is among the most influential in human history.

Except for the general stuff you’ve learned in school, there is a lot more to discover in Greece, and here are 20 facts you may not expect are true about the country and its people, just to give you an idea!

1. ‘Greece’ is not Greece’s Real Name

Greece’s official name, and the one Greeks use, is “Hellas” and Greeks call themselves “Hellenes”.

Hellas is the name derived from Hellen, the son of Deucalion and Pyrrha who, according to the ancient myth, were the only humans to survive the great flood (yes, like Noah’s flood!). Hellen became the father of all the Greeks, and had four sons, who became the fathers of the four major ancient Greek tribes: Aeolus for the Aeolians, Dorus for the Dorians, Ion for the Ionians, and Xuthus for the Achaeans.

The word “Greece” is derived from Graecia, which means “land of the Greeks”, and is what the Romans called Hellas, after Graeci, the Hellenes of ancient Dodona and Epirus who were the first Hellenes the Italic peoples met!

The Greek language has been in use (i.e., spoken and written) since the 3rd millennium BC, with some scholars arguing it was being used even earlier than that!

3. Ikaria is one of the world’s “blue zones”

The island of Ikaria in the North Aegean is where you should go if you want to live a long life! The dwellers of Ikaria have some of the longest lifespans in the world, making it one of the world’s blue zones. Ikaria’s elderly live well into their 90s, with physical and mental prowess.

4. Greece has invented its own iced coffee

The very popular during the hot summer months “frappe” is a Greek invention! It was invented in 1957 in Thessaloniki, and it is made with instant coffee, chilled water, and milk and sugar according to your tastes.

5. There are several varieties of iced coffee in general

Greeks love iced coffee! Some even have it during the winter. The Greek frappe aside, you’ll find also the iced versions of espresso and cappuccino: Espresso freddo and Cappuccino freddo. There is even an iced version of the traditional Greek coffee brew!

6. Open air cinemas are a thing

In Athens alone, you will find 90 open air cinemas that operate strictly during the summer. Open air cinemas are located on roof tops, in terraces, and in courtyards. They are fenced in usually by fragrant crawling plants like jasmine and honeysuckle. Don’t miss the opportunity to have the experience of watching a movie there!

7. Greece has the largest variety of olives

Greece’s olives have been pivotal since ancient times and remain so today! The ‘queen’ of olive varieties is the “koroneiki” but each one has its dedicated fans, so sample them all!

8. The oldest olive tree in the world is in Crete

Estimated to be at least 4,000 years old, the Olive Tree of Vouves has had Minoans, Classical Greeks, Hellenistic period Greeks, Roman and Byzantine period Greeks, and modern Greeks enjoy its shade. Look for it at the village of Ano Vouves, in Chania, Crete. It still produces olives, too!

9. Herodotus was the world’s first historian

Herodotus (c. 484-425 BC) wrote the first work of historical account, called The Histories, where the history of the Greco-Persian wars is documented among other things. He is called “The Father of History”.

Anna Komnene (or Anna Comnena) was a Byzantine princess that lived in the 1100s. She is well known for writing the Alexiad, one of the most important primary sources for Byzantine history of the 11th and 12th centuries AD.

11. The Greek flag is symbolic of its history

The Greek flag has nine blue and white horizontal stripes, which represent the nine syllables of the phrase “Eleftheria i Thanatos” (Liberty or Death) that is the motto of the Greeks, with which they rebelled against the Ottoman Empire in 1821, eventually founding the modern Greek state. The blue is said to represent the sea and sky and the white the purity of the struggle for freedom. The cross represents the dominating religion of Greece, which is Greek-Orthodox Christianity.

Greece has more than 250 days of sunshine per year! In some of the islands, that number goes as high as 300 days per year.

13. Greek food is of the tastiest and healthiest in the world

Greece’s cuisine is one of the most, if not THE most, representative variation of the renowned Mediterranean diet. Science has shown the Mediterranean diet to be one of the healthiest diets in the world, and Greece’s version boasts a wide variety and irresistible taste! From its street food to the traditional dishes to the posh high cuisine, you are guaranteed to love what you eat, without burdening your body!

14. Democracy was invented in Greece, and it was Direct

The first democracy in the world was in Athens, Greece, in the 5th century BC. Its democracy was only for male Athenian citizens, and it didn’t have political parties, nor was it representational. Citizens voted directly on legislation and bills. Officials holding office in Athens had to give account of their actions after their term finished and could be indicted and even forfeit their fortune if found to have caused harm to Athens. Athenians could even vote to exile their politicians for 10 years!

15. The first truly nude scene in European film history was in a Greek film

Look for it in the movie Daphnis and Chloe of 1931, a romance movie about two young lovers, who were found as children by shepherds. It was shot in Lesbos island!

16. There are more than 4,000 traditional Greek dances

Greece’s folk dances are beautiful, reflecting the culture and folklore of every region. Some have amazing backstories, like the Pentozali dance of Crete which was important for the Cretan revolution against the Turks. Make sure to watch them or, if you find yourself in a fair or even a tavern, dance some of them yourself! The locals are glad to teach you while you party!

17. The “evil eye” is the most common Greek superstition

In Greek called the “mati”, the evil eye superstition is so prevalent that it’s almost certain every Greek person has a story about their yiayia doing rituals to ward it off. It is believed that if a person that is angry at you or envies you stares at you intensely while feeling those emotions, a curse of sorts is cast on you, making you feel low in energy or have headaches. A blue eye charm or glass bead on your person is supposed to ward it off.

18. Santorini is an active volcano

Santorini island is volcanically made, and its volcano has been active for millennia: it is partly responsible for the decline of the Minoan civilization! Its last eruption was in 1950.

Check out my post about: The Greek Island Groups

20. Zappeion was built for the revival of the Olympic Games

The Olympic Games, originally held in Ancient Greece, were revived in Athens in 1859. Vangelis Zappas, a businessman dedicated to the revival, paid for the Zappeion in central Athens. Zappeion is a beautiful neoclassical building of great artistry and art deco decorations which is a must-see, as it is representative of the era!