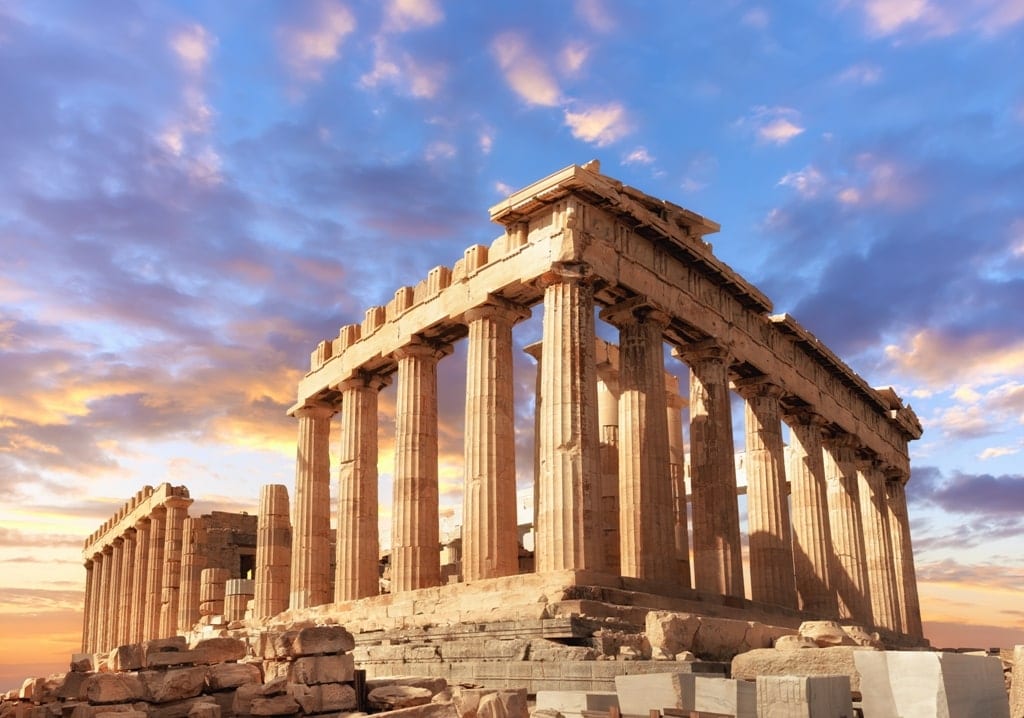 Greece is known for being one of the most popular tourist destinations in the world- and with good reason! No matter where you go in Greece, you will be surrounded by beauty, history, culture, and nature.

But Greece is famous for a lot more than just being a dream vacation spot! Many of the things Western civilization is based on originated in Greece or were introduced by Greece into the West. Some of it you no doubt have been taught in school, but some you may have never heard of before.

There are too many things to list that Greece is famous for, but here are twenty of them that you should definitely be aware of!

What is Greece Known For?

If you can vote and participate in your governance, you have Greece to thank for it. Greece and particularly Athens is famous for the invention of Democracy as a system of governance. The word itself means “the people rule” (from “demos” which means people and the verb “krato” which means to have power).

The original Democracy was direct, with all the citizens (back then, a citizen was a male Athenian) voting on bills and governance. Trial by a jury of your peers also originated then, including accountability of people holding public office.

Greece is also famous for the Olympic Games. Not only did they revive again in Athens in 1896, but they were also born there. The first Olympic Games were held as early as 776 BC. They took place in Ancient Olympia in honor of the god Zeus, the father of the gods, the leader of the classic 12 gods of Olympus. Every male who was a Greek, from any city-state, could participate. They were held every four years, during which an automatic truce was held for any war or skirmish. The Games were stopped during Byzantine times in 393 AD and revived in Athens in the 19th century.

Greece is known for the Greek Pantheon and its myths and legends, so much so that it’s one of the most famous and influential mythologies in the world. The 12 gods of Olympus inspired the Roman gods later. They were unique in that they were very human-like, with very human limitations, faults, and vices.

They were each ascribed a specific responsibility and role. For example, Zeus was the god of thunder, Artemis the goddess of the hunt, Athena the goddess of wisdom and virtuous war, and so on. The myths of them dealing with each other and with mortals still influence art, culture, and philosophy today.

Greece is also known as the birthplace of western philosophy. Socrates (l. c. 470/469-399 BC) is considered the father of western philosophy, with his Socratic method of asking questions to get to the truth and directing philosophy away from the strict exploration of natural science to branch into morality and existentialism.

Socrates’ life and death remain extremely influential. His students, too, went on to be very impactful in western philosophy and science such as Plato, who later went on to found his own school of thought. Plato was the teacher of Aristotle, whose extremely proliferate and multiple contributions to science and philosophy still remain the basis of western thought.

Thales of Miletus is often considered as the father of western science. He was a pre-Socratic philosopher. He is the first one that had the approach of using natural explanations for natural phenomena, effectively jump-starting philosophical and scientific thought.

He is the first one that formed hypotheses and developed general principles. Thales was the one who introduced many scientific and mathematical concepts from Egypt and developed several others himself (such as Thales’ theorem, about how a triangle inscribed in a semicircle is always a right triangle).

Hippocrates (c. 460 – c. 375 BC) is considered the father of western medicine. He is the first physician to posit that illness was not a punishment sent by the gods but actually a condition caused by other physical illness-creating elements, such as a bad diet. He also set the foundation for a physician’s ethics and practices, which yielded the Hippocratic Oath, still taken today.

The concept of Tragedy and Comedy and a very stylistic style of theatre originated in Greece. Greece is known for being the origin of the concept of tragedy, of catharsis of the audience, and of the ‘deus ex machina’ term which comes directly from the Greek ancient tragedies: Deus ex machina is Latin for “god from the machine” and is derived from practice in tragedies, where often a god would appear to offer a resolution to an insurmountable problem. This god would be played by an actor who was shown to be suspended in the air with help of a special machine, hence, ‘deus ex machina’.

Greece is also known for being the birthplace of Anaximander (610 – 546 BC), who was a philosopher who also introduced cartography in Greece, and through Greece to the western world. He was a pioneer and created one of the first world maps, using latitude and longitude. He is also credited with introducing the concept of the gnomon.

Greece is famous for its islands, of course! Of the more than 4,000 islands that Greece boasts, only around 200 are inhabited. And each of these 200 islands is a gem of beauty, culture, architecture, and unique natural habitats and locations. That’s why they are all considered prime tourist destinations, from the white-washed Cyclades to the verdant Ionian islands to the medieval time capsule to be found in the Dodecanese.

Check out: The Greek Island Groups.

9. The souvlaki and gyro

Greece is famous for the souvlaki! Souvlaki means “small spit” and it is basically meat, usually of lamb, pork, or chicken, roasted over the fire on small spits. It is considered one of the healthiest street foods, and of the tastiest ones!

Whether on a spit with oregano and lemon or in a pita wrap with tomato, onions, condiments, and fries, the souvlaki only has fans and avid fans! Its cousin the gyro, meaning ‘round’ in Greek, which is a big spit with meat wrapped around it in layers, is just as popular and tasty.

Greece is famous for its top-quality olive oil, coming from choice olives that are renowned in the world. Its capital, Athens, has its name thanks to the goddess Athena and her gift of an olive tree, as legend has it, which goes to show how important olives and oil making have been in Greece over millennia.

Greece has several types of olives, all of them unique in quality and taste, and its extra virgin olive oil is coveted around the world!

Feta cheese is Greece’s most famous cheese, and as it is PDO (Protected Designation of Origin) Greece is world-famous for it. It’s a soft, salty brined white cheese made of sheep or goat’s milk, and often of these two milk combined.

There are many types of feta cheese, each with slight variations in creaminess and saltiness, and they are used in several savory and sweet dishes. Feta cheese is a great source of calcium and is very nutritious as well as tasty!

Greece is well known for ouzo, too, the famous, clear drink with a high alcohol percentage! Its strong anise flavor is a classic fragrance as well as taste, and in Greece, drinking ouzo is a ritual. There are many types of ouzo, depending on the region where it is being made and the herbs used during its distillation.

Ouzo is always accompanied by mezedes, small mouthfuls of tasty oily or cheesy treats that offset the flavor and keep the drinkers from getting easily drunk, as drinking culture in Greece requires enjoyment of alcohol without actually allowing for inebriation.

Greece is famously the first place where the light was used to direct ships at night. The great lighthouse of Alexandria, in Egypt, was the first-ever built. It was the tallest structure of its time, the Hellenistic period, and its design is still the basic lighthouse design we use today.

Greece has always been known as a maritime nation, and it’s only to be expected that Greeks contributed a lot to ship making techniques and ship designs. Greeks were the first to utilize anchors to secure their ship, originally big heavy sacks or stones, but later on, shaped into the rough shape we use today.

The Marathon is the king of running races in the modern Olympic Games, starting from the first even modern Games in 1896. The first-ever marathon was not a race, but a grueling sprint in the need of urgency, and it was run by Pheiddipides in 490 BC.

He was a Greek hoplite, who ran all the way from the battlefield of Marathon to Athens to announce the defeat of the Persians. Legend has it that as soon as he gave the news, he collapsed and died of exhaustion. It’s this event that created the Marathon, both in the length of running and in the name.

Greece is famous for being one of the sunniest places in the world. It gets 250 days of sunlight a year, with some islands getting as many as 300!

Greece is famous for the hospitality and friendliness of its people. Greeks pride themselves on being good hosts. This is part of the local culture and heritage, going as far back as antiquity, where guests were considered sacred and under the protection of Zeus. Greeks are open-hearted, generally cheerful, and eager to offer tourists the best possible experience in Greece, as they each feel to be ambassadors of their land and culture.

Greece is known for the great nightlife it boasts for the locals and tourists alike. Greek culture is such that Greeks express themselves through dancing. It’s not an accident that there are dances for more than just celebrating- there are dances for expressing sorrow, regret, desperation, or grieving. Though you may only have heard of the sirtaki dance which features in the movie Zorbas the Greek, there are thousands of more dances to enjoy!

You are in for a treat if you go partying with Greeks! There will be dancing (Greek and western), there will be thrills, and there will be a good time no matter where you go!

Filotimo is a Greek word, which is famous exactly because it can’t be directly (or easily) translated into any other language. Many Greeks will tell you that Greece is known for the filotimo of its people: their love of honorable living, of being constructive to society and others, of picking up the slack if they are witness to it, of going the extra mile if they see there is nobody else to do it. A Greek with no filotimo is not considered to be fully Greek and being accused of having no filotimo ranks in the top ten insults you can direct at a Greek person.