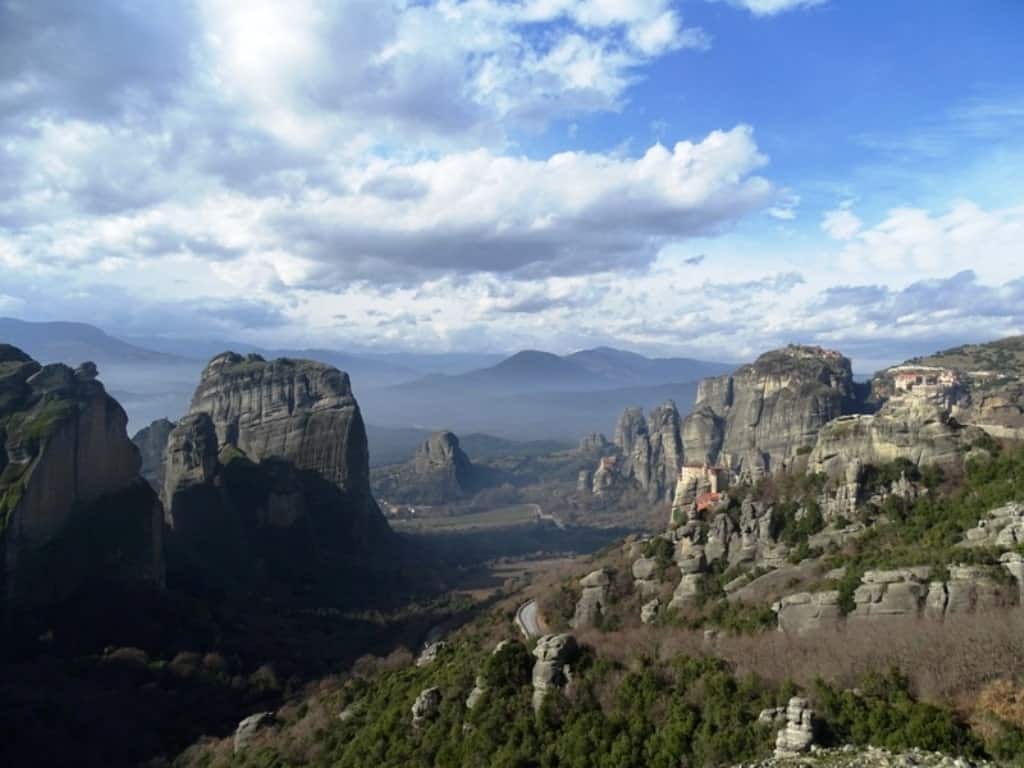 The astonishing Meteora region in the prefecture of Thessaly in Central Greece consists of a spectacular series of slim rocky peaks with neatly perched Byzantine monasteries on top, which creates a truly enchanting and otherworldly landscape that tourists, walkers, and climbers curiously flock to each and every year.

This uniquely beautiful religious complex has its origins rooted in the 9th century AD, and the monasteries have gradually adapted and developed throughout the centuries, whereby six of the original twenty survive today. Meteora also makes for a fantastic day trip from Athens, and there are a number of ways to travel there:

How to make a day trip from Athens to Meteora

Though getting to Meteora from Athens is not exactly a breeze, there are five ways that you can travel there for just a day trip.

One way of traveling to Meteora from Athens via the KTEL bus, which is a service that is specific to each prefecture in Greece.  By traveling by bus, you will be limited by time, especially if you are only traveling for a day trip, as this bus travels from Athens to Trikala, though you will have to switch buses to Kalampaka, which is sometimes written as Kalabaka. Overall, traveling to Meteora by bus is not recommended, as it simply takes too long.

For more information regarding the routes and timetable check here

Another option for traveling independently from Athens to Meteora is to take the train. This route begins at Athens Larissa Station, where you will take a train to the town of Kalampaka, which is the nearest town to the Meteora.

Once you arrive in Kalampaka, you will have to work out how to get to the monasteries; you could either hike (it is not close), take a taxi (which you must book beforehand).

Overall, traveling from Athens to Meteora by train is the most popular option for day-trippers, though it is worth noting that in order to visit the region in a day, you must depart Athens at 7:20 am, arriving at 11:30 am, and then leave Meteora at 17:15pm, arriving back in Athens at 21.25 pm.

To book your ticket head to the trainose website and choose a return ticket starting from Athens and arriving in Kalambaka for the times mentioned above. Note that at these times the train goes straight to Kalambaka and you don’t need to change trains.

By a guided tour

The best option is to take a guided tour. You still have to take the train departing from Athens at 7:20 am, arriving at 11:30 am, and then leave Meteora at 17:15pm, arriving back in Athens at 21.25 pm but your tour collects you and returns you to Kalampaka Station in time for the trains, and shows you the highlights of Meteora and the monasteries.

Click here for more information and to book your one day guided tour from Athens to Meteora by train.

By a private driver

There is the option of hiring an English speaking driver for the day that will take you to the Monasteries of Meteora and wait while you visit each of them. This is a great option for parties up to 4 people that can share a car. The trip lasts for 12 hours and costs around € 550 for up to 4 people.

Click here for more information and to to book your private trip from Athens to Meteora.

Another way of traveling to Meteora from Athens for the day is by car, which you can rent in Athens. However, on a good day without traffic, it will take around four hours each way, which is a large portion of your day already taken in driving time. The conditions in Meteora are also very steep and rocky, and connectivity can drop out, meaning unless you have a map and knowledge of where you are going, it can be a little daunting.

Overall, driving to Meteora from Athens in a day is not advisable; however, if you are driving there as part of a larger road trip, and are not attempting to make the journey a day-trip, it could be a good option.

Tips for your day trip from Athens to Meteora

Where to stay in Meteora

The best way in which to properly experience Meteora to its fullest potential, is by spending a night or two there; this allows you more flexibility and freedom, and prevents you from feeling rushed and pushed for time. Here are some of the best places to stay in the town of Kalampaka, Meteora:

Where to eat in Kalambaka

By far my favorite restaurant in the area is called Meteora. It is located in the central square of Kalambaka and it is a family run restaurant since 1925. It has amazing food and you can even get inside the kitchen to see what you want to eat.

If you do not wish to travel to Meteora independently from Athens on a day-trip, nor do you want to spend a few days in hotel without the added benefit of a tour-guide, another great option is to take a 2-day tour from Athens, such as this one, which is highly recommended:

This incredible 2-day rail tour to Meteora begins at Athens Railway Station, where you will journey to Kalampaka and be collected by an English-speaking driver, before being transferred to your hotel, and experiencing Meteora at sunset. On the second day, you will experience the wonderful beauty of this incredible area, and learn about the vast and fascinating history of the monasteries, before being transferred back to the train station, where you will travel back to Athens.

This is a fantastic way to experience Meteora, as it provides structure to your trip, though you do still have independence and freedom to see what you would like.

Click here for more information and to book you 2-day Meteora trip from Athens.

A mini guide to the Monasteries of Meteora

There are six remaining monasteries in Meteora, and each has their own unique history; here is a breakdown of the highlights and points of interest for each monastery:

If you need a help organizing your day trip from Athens to Meteora leave a comment below.