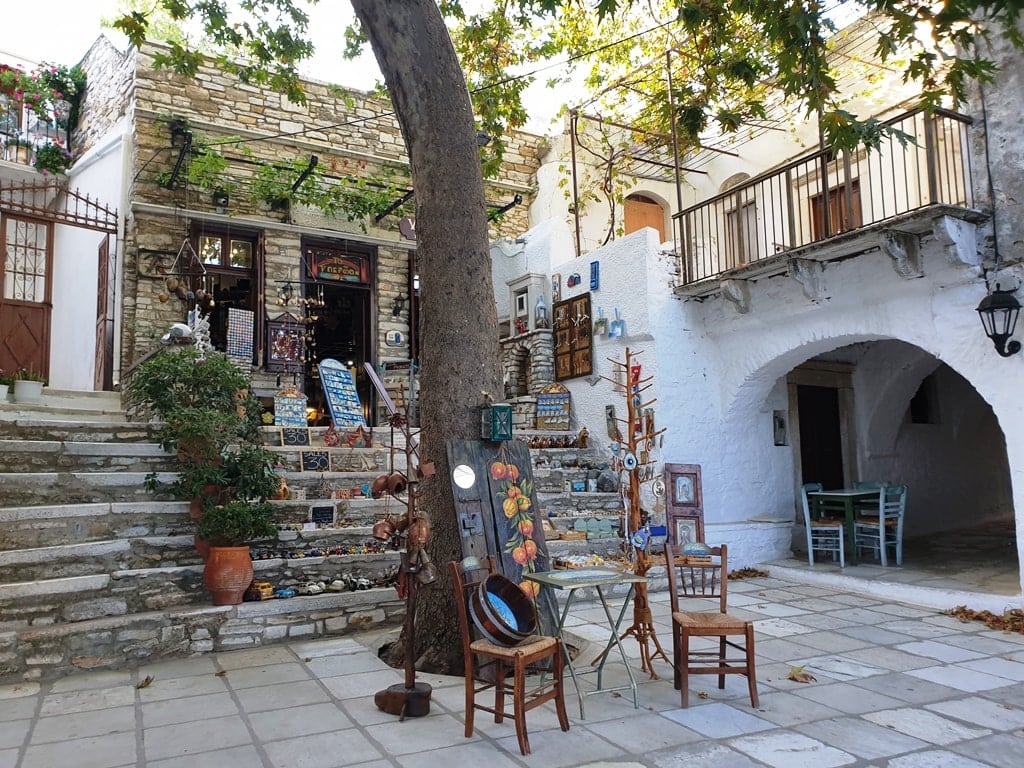 Naxos is the biggest island of the Cyclades and one of the most beautiful of the Greek islands with a lot of variety, gorgeous verdant scenery, and wonderful beaches to visit. One of the quaintest places you should not miss during your visit to Naxos is the mountain village of Apiranthos.

Often called “the marble village”, Apiranthos has managed to preserve the traces of its long and tumultuous history not only in the architecture but also in its people. Apirathos is a jewel in the crown of beautiful Naxos, popular among locals and tourists, and lauded for the uniqueness that sets it apart from all other Naxian villages.

To get the most out of Apiranthos in your visit, here is everything you need to know.

A Guide to Visiting Apiranthos, Naxos

How to get to Apiranthos

Perched on the eastern slopes of Mt. Fanari of Naxos, about 28 km from Naxos’ Chora, you will find Apiranthos.

You can get there by car, bus, or taxi. There are four parking spaces right outside Naxos, two of them quite ample, so you won’t have issues finding where to leave your car. Buses leave frequently for Apiranthos, especially during high season, in case you prefer public transportation to a rental.

Tip: The best way to explore Naxos and its beautiful villages is by car. I recommend booking a car through Discover Cars where you can compare all rental car agencies’ prices, and you can cancel or modify your booking for free. They also guarantee the best price. Click here for more information and to check the latest prices.

Apiranthos is first mentioned in the travels of medieval historian and cartographer Cristoforo Buondelmonti in 1420, but it is estimated to be far older than that. Historians argue that it must have been founded around the 7th century AD, during a time when commerce was in decline and people turned to the earth for survival.

The origin of Apiranthos’ name is disputed. Some argue that it is due to the village being part of a feud by a Franc noble named Peranthos or Aperanthos. Others argue that the name is relatively recent, given to the village right before the Greek War of Independence in 1821.

Apiranthos flourished during Byzantine times with arts and crafts and later became the territory of powerful Franc landowners who fortified it with two imposing towers.

Apiranthos thrived through the ages thanks to agriculture and the mining of emery, yielding several notable historical personalities, including the famous resistance fighter Manolis Glezos who, together with Lakis Santas, during the Occupation of Greece by the Axis forces, tore down the Nazi flag from the Acropolis of Athens in a tremendously important symbolic move.

Because the locals of Apiranthos have a dialect that closely resembles that of Cretans, there are theories that in the 18th century, after a failed attempt to revolt against the Turks, Cretans migrated there. However, the evidence doesn’t support that. Instead, the characteristic accent and turn of phrase of Apiranthos’ dwellers were developed in the village over the ages, in parallel to the one of Crete.

What to see and do in Apiranthos, Naxos

Apiranthos is a gorgeous village full of marble. Explore it and admire the unique architecture which has retained most of its Venetian and Franc elements intact. Walk through the village’s paved marble arched alleyways and paths and rest in one of the many small squares where you will find cafés and restaurants for refreshments. As you walk through the village, take note of the many reliefs and decorative carvings that adorn the fronts of fences and doors.

During the Venetian Empire era, the Venetians fortified Apiranthos with two grand towers which you can also admire as you wander through the village paths.

Beyond the beautiful architecture, you are also in for gorgeous views from the village’s various vantage points. Take in sweeping views of Naxos and the Aegean beyond and let the natural calmness and natural sounds that carry through the quiet of the village relax you completely.

Apiranthos is home to five museums, each one worth visiting:

Apiranthos Archaeological Museum: Take a look at the various collections of artifacts dating from prehistoric times to the early Cycladic period. Many artifacts come from ancient cemetery excavations, with one of the most important exhibits being the ten stone tablets with reliefs depicting scenes from everyday life.

Apiranthos Geological Museum: Naxos has a unique geological identity, and you can learn all about it in this museum. With clear explanations and samples of Naxos’ rocks and minerals, a thorough tour of the history, manner, and significance of emery and its mining, this museum will surprise you with the sheer beauty of the exhibits.

Visual Arts Museum of Apiranthos: Enjoy works of art by 75 artists from Apiranthos and Greece in general. Paintings, sculptures, pottery, and prints are displayed tastefully for you to admire.

Museum of Natural History: Several exhibits of marine life, such as skeletons of various types of dolphins and whales, various fishes, and invertebrates are displayed along with interesting information about them.

Folklore Museum of Apiranthos: Go on a journey back in time by looking at various household items, utensils, folk dresses, and woven works from previous centuries, showing how daily life was in Apiranthos before modernity.

Visit the Tower of Zevgolis

This magnificent 17th century Venetian tower is extremely well preserved. It was acquired by the current family right after the War of Independence in 1821. It features many elements of Cycladic architecture, with several balconies and arches. Look out for the coat of arms depicting a lion on the main entrance.

Check out my other guides on Naxos island:

How to get from Athens to Naxos

Things To Do in Naxos Island, Greece

Portara Naxos: The Temple of Apollo

Where to stay in Naxos

A Guide to Naxos Town

Naxos or Paros? Which Island Is the Best for Your Vacation?

Best Ιslands to Visit Near Naxos

Panagia Aperanthitissa: The church of Panagia Aperanthitissa, which means “Our Lady of Aperanthos”, is dedicated to the Dormition of the Virgin Mary. It is more than 200 years old. Legend has it that it was built after a shepherd followed a divine light and found an icon that led him to the spot where the church had to be founded.

The church is gorgeous, with a tall belltower that is visible from afar, a great blue dome, and a large marble yard. Inside you will see a beautifully sculpted marble iconostasis, which is said to be the largest one in the Balkans.

There are also several silver lamps and dedications dating from the 1800s with beautiful craftsmanship. Panagia Aperanthitissa is supposed to be a place of miracles and great devotion by the faithful. A must-see for every visitor to Aperanthos, regardless of faith.

Aghia Kyriaki: This rare church was built in the 8th or 9th century AD and is unique for its preserved frescoes because these frescoes are not icons. The church is a powerful testament to the era of Byzantine Iconoclasm as the frescoes only depict crosses, geometric patterns, floral motifs, and birds. Its carved wooden iconostasis dates from the 13th century, along with some other frescoes that depict scenes from the New Testament. The church was fully restored in 2016.

Apiranthos’ legacy in woven works is great and it is being faithfully carried by 15 ladies of Apiranthos. They create beautiful embroideries and weave in the traditional loom. Look through a vast variety of cushions, tablecloths, shawls, carpets, quilts, and bedding with traditional patterns and decorations and get truly unique and authentic souvenirs for your home or fashion statement!

Find them at their workshop in the village, titled “Woven Products Cooperative”.