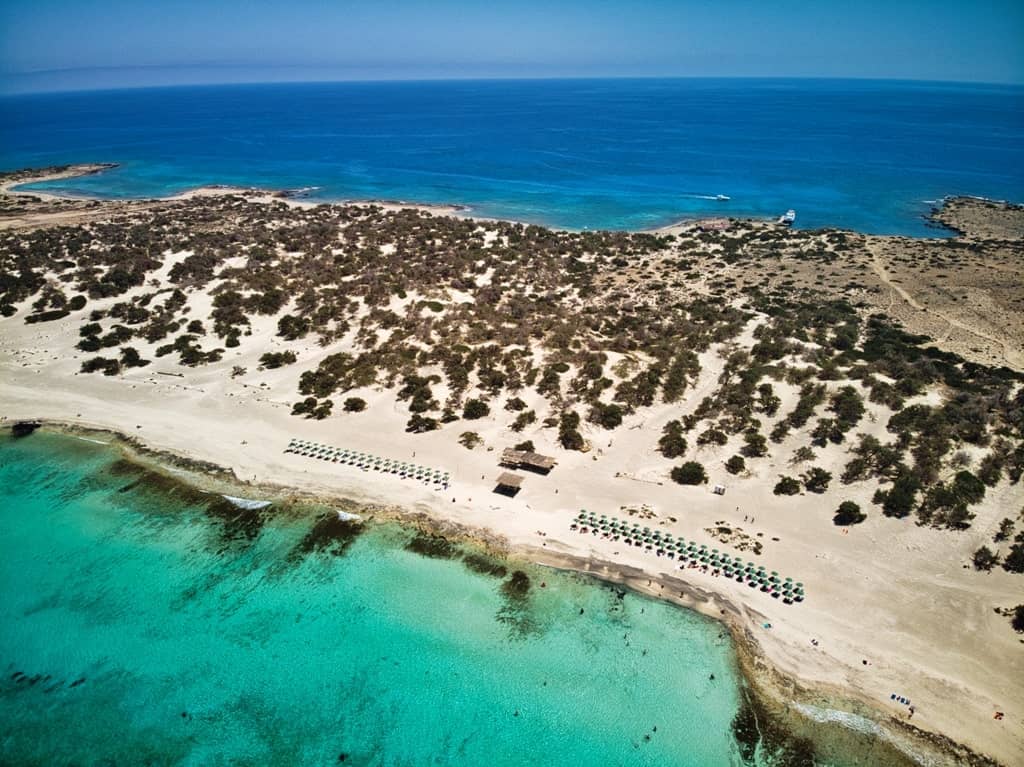 Situated 15km off of Ierapetra on the South coast of Crete, the natural beauty spot of Chrissi (Chrysi) island with its protected ecosystem can be found. Though no longer a secret location, Chrissi island rather resembles paradise with its white sand beaches and African Cedarwoods not to mention the crystal clear blue water perfect for snorkeling. Read on to discover if a day trip to Chrissi Island could be one of the many highlights of your trip to Crete.

Disclaimer: This post contains affiliate links. This means that should you click on certain links, and then subsequently purchase a product, I will receive a small commission. It costs nothing extra to you but helps keep my site running. Thank you for supporting me in this way.

A Guide to Chrissi Island Crete

Covering an area of 4,743 sq km (7km in length and 2km wide), Chrissi Island is a protected nature reserve covered by the European initiative; Natura 2000. An important ecosystem, it is the natural habitat of snakes (non-poisonous), lizards, worms, and rabbits with Caretta-Caretta sea turtles and the Monk Seal Monachus-Monachus also visiting the island.

A rare 200-300-year-old cedar forest covers 70% of the island, making it the largest naturally formed Lebanon cedar forest in Europe with the trees reaching 7-10 meters in height and 1 meter in diameter.

The island was formed from solidified lava and 49 species of fossils (made up of shells, corals, barnacles, and urchins) have been discovered, these being trapped by the lava between 350,000-70,000 years ago when the island was still underwater.

Chrissi Island is the southernmost natural park in Europe (though not the most southerly point of Europe which is at another island just off of Crete; Gavdos) and is sure to make you think for a moment that you’ve landed up in Bali or somewhere in the Caribbean rather than a stone’s throw away from the Greek island of Crete!

Inhabited by pirates (ruins of pirate merchant ships lay on the bottom of the seabed) and hermits in recent history Chrissi island has a 13th-century church and graves from the Roman Empire. However, recent archaeological discoveries show that humans have been visiting Chrissi Island as far back as Minoan times.

Evidence shows that people would have most certainly used Chrissi Island for fishing and salt mining but perhaps, due to the availability of shells, it was also here that the classical antiquity dye known as Royal Purple was made using the extracted mucus of the spiny dye-murex snail.

Named Chrissi (Χρυσή) for its golden beaches, the island also has another name – Gaidouronisi. This translates as ‘the island of the donkeys’ as locals from Ierapetra used to take their beloved old donkeys across to Chrissi so that they (the donkeys) could spend their last days enjoying the pristine beauty of the place.

Today it’s the tourists who enjoy the natural beauty of this idyllic islet though it does have amenities to make the lives of visitors a little more comfortable with 2 organized beaches with sunbeds, basic portaloos, and a beach bar on each where you can get drinks and lunch if you haven’t stocked up on the boat or packed a picnic.

How To Reach Chrissi Island

The main departure point for Chrissi Island is from the South Eastern town of Ierapetra with a variety of boats departing daily between 10.00-12.00 during the tourist season at a cost of €20.00-€25.00 each.

Boats also depart from Makrigialos and Myrtos which, though more expensive due to the boats usually being faster and smaller, can offer a more comfortable journey versus being crammed on the tourist ferry! Note that you’ll be required to pay a visitor’s tax of €1.00 on the boat, this is not included in the ticket.

The boats going back to Ierapetra usually depart Chrissi Island at 16.30 or 17.30 with a journey time of just under 1 hour each way through booking a private speedboat can cut the journey time down to as little as 20 minutes each way in good conditions – Great if you’re short on time but desperate to visit Chrissi Island.

It’s not necessary to pre-book as you’ll be asked by numerous salespeople if you want to go to Chrissi Island as you walk along the seafront of Ierepetra thought for peace of mind in August, and if traveling a distance especially for Chrissi island, you may wish to pre-book.

All of the tourist boats dock on the Southside of the island at the only port (think pier) called Vougious Mati so occasionally boats do have to queue to let passengers disembark. From the port, where you’ll find a taverna, the nearest organized beach called Belegrina or Chrissi Ammos (Golden Sand) is an easy 5-minute walk following a path through the fragrant cedar trees to reach the Northside of the island.

From the Heraklion Area: Day Trip to Chrissi Island

The Northside of the island is more rugged and picturesque, reached by passing through the cedar forest, but this is the windy side of the island so the Southside can become a haven for those seeking to keep the sand out of their eyes! Below are just a few of the beaches that you can explore and enjoy…

Located on the south side, this is where the boats come in and where you’ll find a taverna but to the West of the pier, you’ll discover a pretty bay with small caves to explore. Alternatively, lay your towel down on the East side of the pier, this is a rocky beach but usually has calm water on the days that Belegrina beach water is choppy.

This beach is located on the Northside of the island which a 5-minute walk through the Cedar forest from the pier. It’s an organized beach with sunbeds and a beach bar though there’s space to lay your towel down on the golden sand that’s tinged with pink made from thousands of shells. This is the most crowded part of the island due to the proximity to the harbor but also due to the amenities.

This quiet beach, located West of Belegrina, enjoys the shade of the cedar trees and despite being rocky, has calm waters. Now away from the sunbeds, this is where you start to think you’re on a tropical desert island and can let your worries float away as you look out across the turquoise clear water or look up to admire the cedar trees. Nearby, you can discover some of the history of the island by visiting the nearby lighthouse, the picturesque chapel of St. Nicholas, the old salt lake with the only 20th-century house on the island, and the (scant) Minoan settlement before reaching Avlaki Beach at the Western end.

This secluded beach is split into 2 by a strip of rocky ground but enjoys shallow water perfect for snorkeling. The beach faces the small island of Mikronisi, located East of Chrissi island which is a shelter to thousands of birds so pack your binoculars as you may be able to enjoy a day of twitching whilst digging your toes into that fine golden-white sand. Don’t spend all day laying down though, from Kataprosopo you’re just a few meters away from the highest point on the island known as Kefala Hill which rises up 31 meters – From the top, you can see the entire length of the island.

This is the most wild and rugged as well as the most Western beach on Chrissi island. It’s very rocky, better for hiking and exploring rock pools than swimming or sunbathing and is often windy with little shade so if you walk here, after visiting the lighthouse and church en-route, be prepared with plenty of water, sunscreen, and hats/clothing to cover up as needed.

If the thought of all of those people on the famous Golden Sand beach fills you with horror, make your way to the large isolated Vages Beach on the Southeast side which is often quieter but for a reason – The Southern beaches get more wind and Vages Beach has rocks underfoot at the seashore so beach/swim shoes are a must unless you want to be one of those people hobbling around with a cut foot.

Things to See and Do n Chrissi Island

Now’s the time to let your worries wash away as you sink your toes into the sand and sprinkle the teeny tiny shells through your fingertips as you listen to the lull of the sea meeting the shore – Ahh, bliss! When you get too hot make a splash into the turquoise-blue sea and stick your head below the water to watch the fish swim by, just watch out for the sea urchins.

Follow the boardwalk as you set off on a stroll around this picturesque island, water bottle in hand, to admire Mother Nature. Leaving the sunbeds of tourism in your wake, breathe in the aroma as you pass the weather-beaten cedar trees with their old twisted branches, cross the white sand dunes full of shells, and meander past the church and lighthouse. Despite needing to stick to the designated paths, you soon leave the crowds behind with breathtaking views of blue/turquoise sea meeting the blue of the sky or the white of the sand everywhere you look.

The Church of Agios Nikolaos (St Nicholas) thought to date back to the 13th century is located on the North-West side of the island. Built on the site of an older temple, the remains of stone walls, a water well, and graves dating back to the Roman Empire can also be seen close by. Visitors can also see the small solar-powered lighthouse, the scant remains of a Minoan settlement, and a 20th-century house, the only one on the island.

Plan your trip to Crete:

The best time to visit Crete

Things to do in Lasithi, Eastern Crete

Things to do in Chania

Things to do in Heraklion

Things to do in Rethymnon

Best things to do in Crete

Where to stay in Crete

3 thoughts on “A Guide to Chrissi Island, Crete”