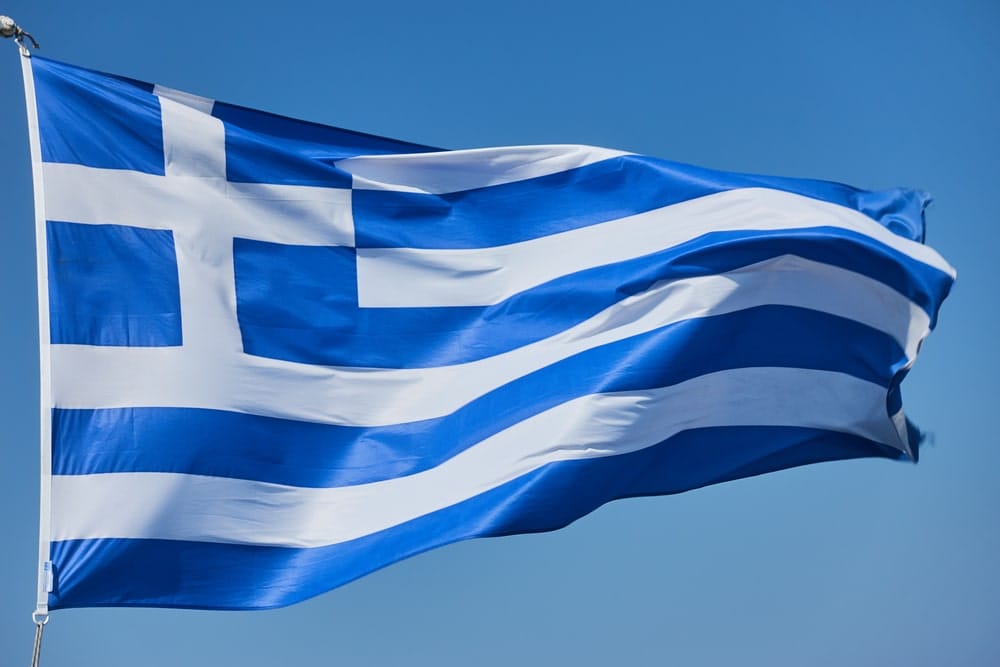 The Greek flag is perhaps one of the most recognizable ones for those who love geography. Just like Greece, the flag itself has gone through a tumultuous history, and each version that led to the one currently known around the globe has a powerful significance for the Greek people and their heritage.

Flags in general are designed to represent their respective countries and nations, so each element upon them is extremely symbolic, from the designs to the colors. The Greek flag is no different! For those who can decode its design, the entire history of modern Greece unfurls every time the wind makes that flag fly.

The design of the Greek flag

The Greek flag currently has a white cross on a blue background and nine horizontal lines of alternating blue and white. There is no formally stated, official shade of blue for the flag though generally a royal blue is used.

The flag proportions are 2:3. It can be seen plain or with a golden tassel fringe all around it.

The symbolism of the Greek flag

There is no officially verified explanation of the sum of symbolism surrounding the Greek flag, but each of the ones listed below is accepted as valid interpretations by the majority of the Greeks across the board.

The colors blue and white have been said to symbolize the sea and its waves. Greece has always been a seafaring nation, with an economy that revolves around it, from commerce to fishing to exploration.

They are also, however, said to symbolize more abstract values: white for purity and blue for God who promised Greeks their freedom from the Ottomans. Blue is associated with the divine in Greece, as it is the color of the sky.

The cross is a symbol of Greece’s predominately Greek Orthodox faith, a seminal aspect of differentiation from the Ottoman Empire during the pre-revolutionary and revolutionary times.

The nine stripes symbolize nine syllables of the motto used by the Greek revolutionaries during the Greek War of Independence in 1821: “Liberty or Death” (Eleftheria i Thanatos = e -lef-the-ri-a-i-tha-na-tos).

There is also another interpretation of the nine stripes, symbolizing the nine muses and thus the cultural heritage of Greece over the millennia.

The history of the Greek flag

Both flags were designed in 1822 but the “Land Flag” was the main one as it was the next evolution of the ‘Flag of the Revolution’: a blue narrow cross over a white background. During the revolution of 1821 that sparked the War of Independence, there were several flags to signify the wish for independence from the Ottoman empire.

Each flag was designed by the captains leading the revolution with their coat of arms or the insignia of their territory. These various banners eventually consolidated into a single Flag of the Revolution, which, in turn, gave rise to the Land Flag as well as the Sea Flag.

The Land Flag remained as the main one until 1978 but it went through several different iterations depending on what the regime of Greece was at any given time. So when Greece was a kingdom, the Land Flag also featured a royal crown in the middle of the cross. This crown would be removed and restored every time the king would be ousted from Greece and then return (it happened more than once!).

The last regime to adopt the Land Flag (without a crown) was the military dictatorship of 1967-1974 (also known as the Junta). With the collapse of the Junta, the Sea Flag was adopted as the main state flag and has been ever since.

And a fun fact about the Sea Flag: it has remained flying high in the war navy’s masts, never lowered by an enemy during war, as the Greek war navy has remained undefeated through the ages!

Practices around the Greek Flag

The Flag is hoisted daily at 8 am and lowered at sundown.

The Land Flag is still one of the official flags of Greece, and it can be seen flying on the Old Parliament building’s mast in Athens. On Flag Day it can be seen at random on balconies, as people sometimes keep both versions.

There are three Flag Days:

One is on October 28th, the national holiday of “No Day” commemorating the entrance of Greece in WWII on the side of the Allies and against fascist Italy that was about to invade. It is also on March 25th, the second national holiday commemorating the beginning of the War of Independence in 1821. Lastly, it is on November 17, the anniversary of the Polytechnic Uprising of 1973 which marked the beginning of the military Junta collapse, where respects to the Flag must be paid.

The Flag may not touch the ground, stepped on, sat upon, or be thrown away in the trash. Worn-out flags are disposed of by burning them respectfully (usually by ceremony or in an auspicious manner).

No Flag should be allowed to remain on the mast worn out (in shreds, torn up, or otherwise not intact).

It is forbidden to use the Flag for commercial purposes or as a banner for unions and associations.

Anyone who purposefully defaces or destroys the Flag is committing a crime that is punishable by jail time or a fine. (This law extends to protect all national flags of the world against defacement)