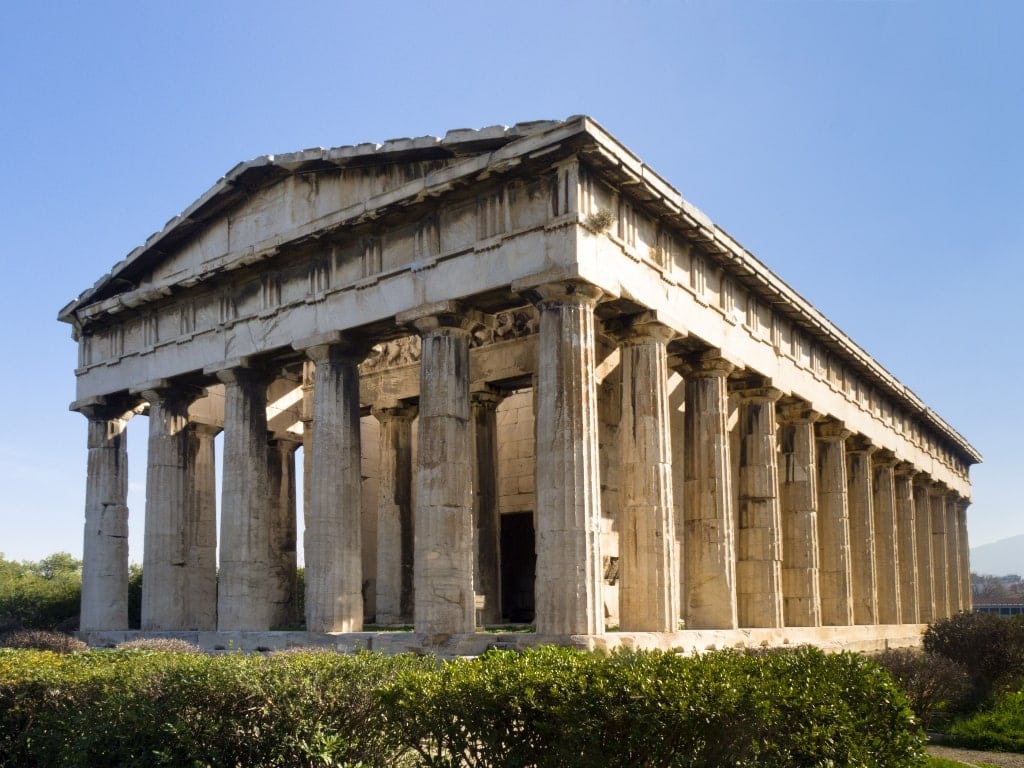 Every civilization needs a place to worship the divine. The ancient Greek were no exception. The ancient Greek temple had one primary function: to provide a shelter for the statues of the gods. It was believed that in the statues dwelled the spirits of the gods. Thus, it was only natural for the Greeks to bring forth constructions that would befit the majesty of their gods.

The Temple of Hera, or Heraion, is an ancient Archaic Greek temple in Olympia. Dedicated to the Hera, the highest goddess in the Greek pantheon, it was the oldest temple at the site and one of the most famous and venerable in all Greece. The temple was built around 590 BC, but was destroyed by an earthquake in the early 4th century AD. It was constructed according to the Doric architecture and it had 16 columns, with its lower part made of limestone and the upper part built with mud brick. At the altar of the temple, which is oriented east-west, the Olympic flame is lit still to this day and carried all around the world.

The ancient Greek temple of Poseidon at Cape Sounion was built during 444-440 BC and is considered one of the major monuments of the Golden Age of Athens. The temple overlooks the sea at the end of the cape, at a height of almost 60 meters. It was a peripteral building of the Doric order, made of marble, with six columns at its ends and thirteen on each long side for a total of 34, 13 of which survive to this day. The frieze fragments survive in a bad state but it is believed they illustrated popular mythological themes, such as the Amazonomachy, and were richly decorated with sculptures.

The temple of Apollo in Corinth is one of the earliest Doric temples in the Greek mainland. It was built around 560 BC of local limestone. This temple was an emblem for the Greek city of Corinth, projecting the city’s prosperity and growth. It belonged to the peripteral type of temples, surrounded by a pteron of 42 monolithic, limestone columns, each over 7 meters high.

During the Roman period, when the Romans refounded the city, the temple of Apollo was renovated so that it could function as the worship place of the Roman Emperor. Today, the temple is the emblem of the Archaeological Site of Ancient Corinth and remains one of the few standing Archaic Greek Temples in the world.

The temple of Apollo in Delphi occupied the most important and prominent position in the Delphic Panhellenic Sanctuary. The temple that survives today is the third one built in the same place, and it was completed around 510 BC. This is the place where the infamous oracle, the Pythia, operated, offering to visitors signs that were later interpreted by the priests.

This was a Doric peristyle temple, with six columns at the end and fifteen at the sides, and built of stone and marble. Of the west pediment, which depicted the Gigantomachy, only the figures of Athena, a fallen giant, a male figure and two horses have survived to this day. This temple was destroyed by an earthquake in 373 BC.

The temple of Aphaea is located on the Greek island of Aegina, in the Saronic Gulf, and it is part of a wider sanctuary complex dedicated to the goddess Aphaea. It was built around 500 BC over the remains of an earlier temple of 570 BC, which was destroyed in 510 BC. This is a Doric temple, although the influence of Ionic architecture is prominently seen. The temple was built of limestone, had 32 columns twelve on each side and six at the front and back.

The sculptures of the pediment depict scenes of the battle fought by Aeginetan heroes during the first and second wars against Troy. These sculptures are on display in the Glyptothek of Munich, with a number of fragments located in the museums at Aegina and on the site itself.

The temple of Hephaistos is the best-preserved ancient temple in Greece. Dedicated to Hephaistos, the god of fire, it is located at the north-west side of the Agora of Athens, on top of the Agoraios Kolonos hill. It is a peripteral temple, of Dorian architecture, with 6 columns on the short east and west sides and 13 on the north and south sides, and it was built around 450 BC from Pentelic marble, while its sculptures are made of marble from Paros. The temple was designed by Iktinus, one of the architects of the Parthenon, and has survived in a great state due to its history of varied use.

The temple of Apollo Epicurius is one of the most well-preserved monuments of classical antiquity. Located within the sanctuary of Bassae in the mountains of Arkadia, the temple was built around 420 BC and dedicated to Apollo Epicurius by the Phigaleians, who believed the god of sun and healing had protected them from plague and invasion.

The isolation of the site ensured the survival of the temple, which exhibits a significant number of bold and innovative architectural designs, thus marking a turning point in the development of temple-building. The temple boasts an exceptional proportion of 15 columns on the longer side and 6 columns on the facade, while the decorative frieze of sculptured panels that formed an integral part of the design was removed in 1812 and it is exhibited in the British Museum.

The Parthenon is considered the most important surviving building of Classical Greece. It was built between 447 and 438 BC on top of the Acropolis of Athens and it was dedicated to the patron deity of the city, Athena. The architects were Iktinos and Kallikrates, while the famous sculptor Pheidias supervised the entire building program and conceived the temple’s sculptural decoration and the chryselephantine statue of Athena.

The Parthenon is a double peripteral Doric temple which presents several unique and innovative architectural features, with eight columns on each of the short sides and seventeen columns on the long ones. It was built when the Athenian Empire was at the peak of its power as a monument of the celebration of the Hellenic victory over the Persian invaders.

The temple of Athena Nike was built on the Acropolis of Athens, around 420 BC, dedicated to the goddess Athena and Nike. Nike was the goddess of victory in Greek mythology, and Athena was worshipped in this form, representative of being victorious in war. It is considered the earliest fully Ionic temple on the Acropolis, and it was designed by Kallikrates.

It holds a prominent position on a steep bastion at the south-west corner of the Acropolis to the right of the entrance, the Propylaea. The temple was decorated with a continuous frieze and several relief sculptures of Nike in various states of activity.

The Erechteion is a temple constructed on the north side of the sacred rock of the Acropolis of Athens between 421 and 406 BC, during the Peloponnesian War, to glorify the great city at the peak of its power and influence. It was built on the ruins of an older temple dedicated to Athena Polias, while the temple itself took its name from Erechtheus, the mythical king of Athens.

The temple was built entirely from Pentelic marble and it housed the ancient wooden cult statue of Athena, which the Arrhephoroi draped with the sacred peplos during the Panathenaic festival. On the south part of the Erechtheion is located the porch of the Karyatides, a pi-shaped structure with six female statues instead of columns to support the roof.

The temple of Asclepius was a sanctuary in Epidaurus dedicated to Asclepius, the healer god. During ancient times,  the place was considered the main holy site of Asclepius, also rivalling major cult sites such as the Sanctuary of Zeus at Olympia and Apollo at Delphi. The temple, of Doric architecture, was built in the early 4th century BC, and it had eleven columns on its long side and six on it short.

Inside the temple, there was also placed a cult statue of Asclepius, which no longer survives. According to tradition, in order to find the right treatment for their diseases, people spent the night in a sleeping room and the god himself would come to their dreams and tell them what to do in order to be cured. Today, the sanctuary and the close by theatre form a popular archaeological site.

Check out my post about the Ancient Theatre of Epidaurus.

The temple of Olympian Zeus, also known as Olympieion, is a former colossal temple at the centre of Athens. Dedicated to the father of the gods, the building was the largest temple in Greece and housed one of the biggest statues in the ancient world. Its construction took 638 years to complete, beginning in the 6th century BC during the rule of the Athenian tyrants, and completed during the reign of the Roman Emperor Hadrian in the 2nd century AD.

Only 15 columns survive from the original temple, which was built by limestone and marble, and presenting characteristics of both Doric and Corinthian orders. Many statues of gods and Roman emperors adorned the temple, including an enormous chryselephantine statue of Zeus. Today, the temple of the Olympian Zeus is considered one of the finest ancient monuments of the city.

The temple of Hera was the first of the gigantic free-standing Ionic temples, built during the late Archaic period on the island of Samos, 6 km southwest of the ancient city (present-day Pythagoreion). It was constructed near the mouth of the river Imvrasos due to the close connection of the area with the worship of the goddess Hera. This was an octastyle dipteral temple, and of the original 115 columns that surrounded it, only one still stands today, widely known as the Kolona.

The Heraion was designed by Polykrates and it is considered one of the largest Greek temples ever built. A triple row of columns framed the short sides, with the capitals following the volute and Ionic design. Despite its size and significance, the sanctuary was not Panhellenic in character, but belonged exclusively to Samos, being inseparably bound up with the political history of the city.

The temple of Demeter in Sangri was built around 530 BC on the Greek island of Naxos. It is a prime example of Ionic architecture and was built entirely from white Naxian marble of the finest quality. The temple is of high importance for the island of Naxos, as it is one of the few monuments built in the Ionic order on the Aegean islands, which also can be reconstructed in detail. It is set in a picturesque environment and considered one of the most beautiful ancient temples.  It declined after the 3rd century BC, with the domination of Christianity, and turned into a Christian religious centre.