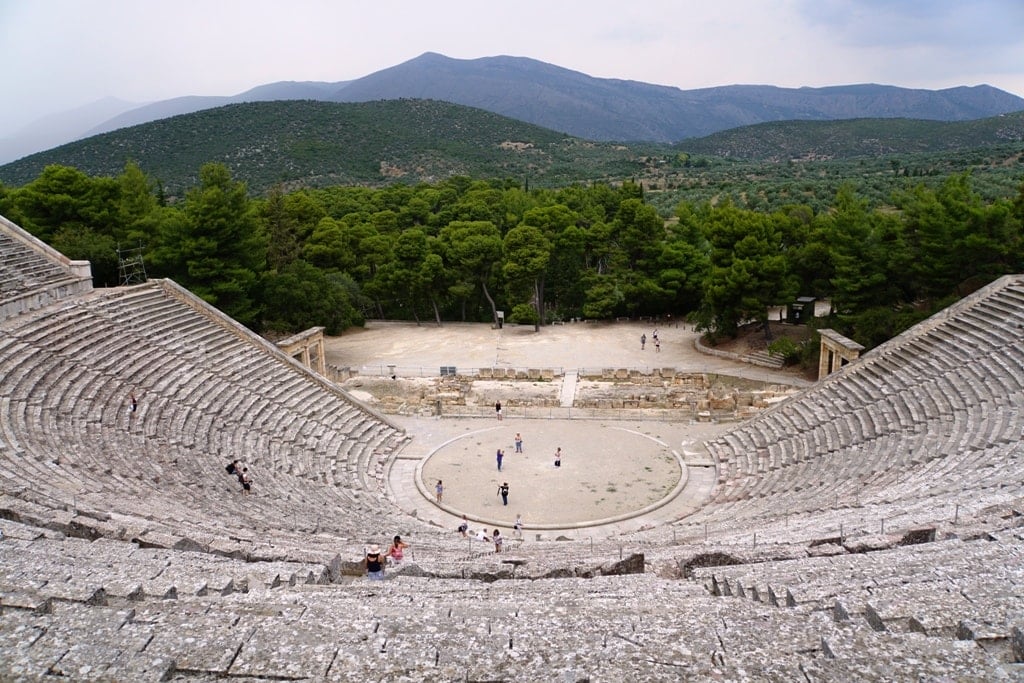 Considered one of the greatest ancient Greek theaters with regards to acoustics and aesthetics, the Ancient Theatre of Epidaurus is also known as one of the best-preserved ones in the whole of Greece.

History of the Ancient Theatre of Epidaurus

Located on the southeast end of the sanctuary dedicated to the Asclepius, the god of medicine, on the west side of Cynortion Mountain, it was constructed in the late 4th century BC (between 340-330 BC) in the ancient town of Epidaurus by an architect from Argos, Polykleitos Neoteros, and it was finalized in two stages.

It was primarily built for the amusement of Asclepeion’s patients since it was widely thought that watching dramas and comedies had significant beneficial effects on the mental and physical health of the patients. Today, the theater is considered to be one of the most famous and important ancient sites in the country.

Surrounded by lush greenery, the monument retains even to this day the tripartite structure that characterizes the Hellenistic theater architecture in general: it has a theatron (auditorium), an orchestra, and a skene.

The orchestra is the circular place where the actors and chorus would play, and with a diameter of 20 meters, it constitutes the center of the whole structure. In the center stands a circular stone plate, the base of the altar. The orchestra is surrounded by a special underground drainage pipeline of 1.99 m width, called the euripos. The euripos was covered by a circular stone walkway.

The skene (stage) is the oblong building on the back of the orchestra where the actors and the chorus would use in order to change costumes, and which was constructed in two phases: the first is placed at the end of the 4th century BCE and the second in the middle of the 2nd century BCE. It consisted of a two-story stage building and a proscenium in front of the stage.

In front of the proscenium existed a colonnade, while on both of its sides the backstages extended. East and west of the two backstages there were two small rectangular rooms for the needs of the performers. Two ramps lead to the roof of the proscenium, the logeion, where the actors later played. Finally, the theatre had two gates, which are now restored.

The auditorium of the theater of Epidaurus is generally composed of 55 rows of seats, and it is divided vertically into two unequal parts, the lower hollow part or theater, and the upper theatre or epitheatre.

The two sub-sections are separated by a horizontal corridor for the movement of spectators (width 1.82 m.), known as the frieze. The lower part of the auditorium wedge is divided into 12 sections, while the upper part is divided into 22 sections. Furthermore, the lower rows of the upper and lower auditoriums have a unique formal shape, seats reserved for important people and officials.

The design of the auditorium is unique and based on three marking centers. Thanks to this special design, the architects achieved both optimal acoustics and a wider opening for better viewing.

The theater of Epidauros widely marveled for its exceptional acoustics, since the actors could be perfectly heard by all 15.000 spectators attending the events. Any sound on the open-air stage, even a whisper or a deep breath, could be perfectly audible to all, even to the topmost row of seats, which is nearly 60 meters away.

The structure is also famous for its wonderful harmonious proportions and its architectural symmetry. The material used for its construction was local grey and red limestone for the theater, and soft porous stone for the stage, materials that are sound absorbing in the same way as the human body. It is also interesting to note that the theater did not suffer any modification during Roman times, unlike many other Greek theaters of the period.

The theater was used for many consecutive centuries, until in 395 AD, the Goths who invaded the Peloponnese caused serious damage to the Asclepeion. In 426 AD, the emperor Theodosios forbidden by degree the operation of every temple of Asclepius, in his effort to put an end to pagan religion. The sanctum of Epidaurus was thus shut down after a 1000 years of operation. Natural disasters, human intervention and the sands of time completed the desolation of the area.

The first systematic archaeological excavation of the theatre began in 1881 by the Archaeological Society, under the supervision of Panayis Kavvadias. He, together with A. Orlandos are responsible for the great level of restoration of the area, which is now kept in good condition. With the work done, the theatre has been recovered – except the stage building – almost entirely in its original form.

The first modern performance that took place at the theatre was Sophocle’s well-known tragedy ‘Electra’. It was played in 1938, directed by Dimitris Rontiris, starring Katina Paxinou and Eleni Papadaki. Performances stopped due to World War II and began again, in the framework of the organized festival, in 1954.

In 1955 they were established as an annual event for the presentation of ancient drama. The site has also been used sporadically to host major musical events and famous artists, such as Maria Callas, who performed Norma in 1960 and Médée in 1961. The famous Athens Epidaurus Festival continues to this day,  been carried out during the summer months and hosting both Greek and foreign artists.

Tickets and Opening Hours to Epidaurus

Full: €12, Reduced: €6 (it includes entrance to the archaeological site and the museum).
November-March: 6 euros
April-October: 12 euros

Photos from the Museum of Epidaurus

How to get to the Ancient Theatre of Epidaurus

Rent a Car: Enjoy the freedom of making your own itinerary and driving to Epidaurus from Athens as a day trip or part of a Peloponnese road trip. The journey takes approximately 1 hour 45 minutes on the well-maintained highway with signposts in Greek and English – Just head for the Corinth Canal until you see signs for Epidaurus appearing.

Public Bus: The public bus run by KTEL departs from Athens to the village of Epidaurus every Friday and Sunday at 9.30 am and 4.30 pm with some extra services during peak times and the Summer festival. The bus does not go straight to the archaeological site but stops at Epidaurus village where you can take another bus or a taxi to the archaeological site located 20 minutes away. Check here for more information.

Guided Tour: Avoid the stress of making your own way to Epidaurus and book a guided tour with pickup from your Athens hotel. As well as being guided around the Sanctuary of Asklepios by a knowledgeable English-speaking guide you’ll also get to visit the ancient fortified city of Mycenae allowing you to cross off 2 of the major Greek archaeological sites in a 1-day trip.

Click here for more information and to book this one-day trip to Epidaurus and Mycenae.