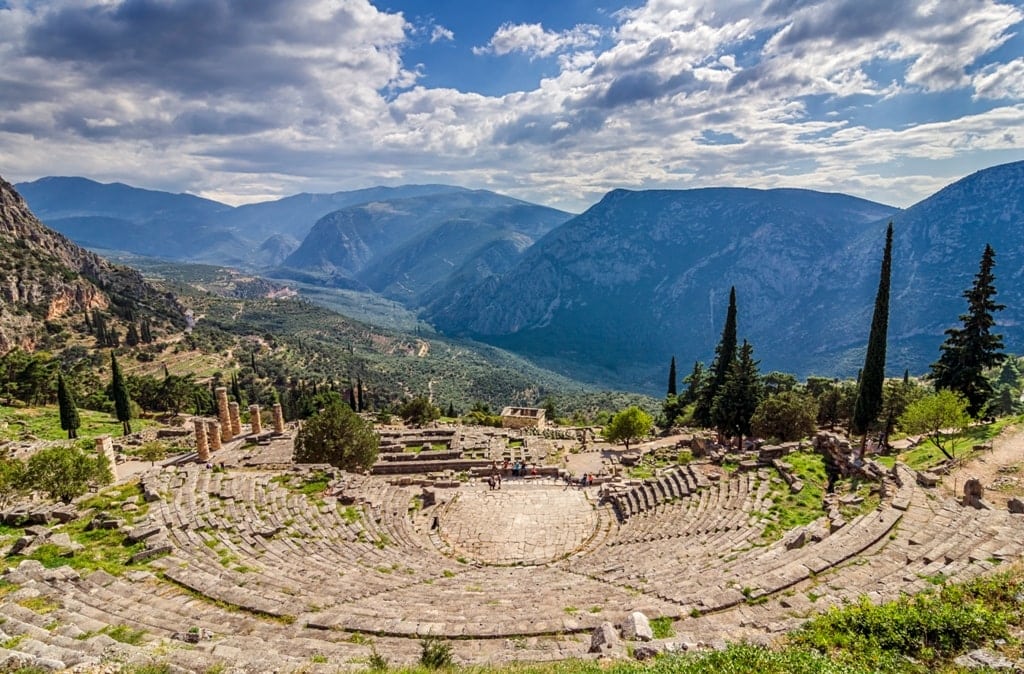 If there is one place in the world where you’re going to find incredible ancient theatres – it has to be Greece. In fairness, it’s hard to find a country with a richer history than Greece, so you’d expect there to be an array of ancient theatres!

No matter where you are in Greece, you won’t be too far from an ancient theatre. Many of these theatres date back thousands of years, and visitors marvel at the sheer genius of the architecture. Visitors also adore the fascinating stories behind these ancient theatres, which can be explained by the superb tour guides.

In this article, we’ll tell you about the best ancient theatres in Greece – and why you should visit them on your trip!

If you want to be dazzled by the ancient capital’s incredible history when you come to Athens, visit the Theatre of Dionysus – you won’t be disappointed. The theatre is on the southern slope of Acropolis Hill and easily accessible from Athens’ central areas.

The Theatre of Dionysus dates back to the fourth century BC when it hosted the City Dionysia. Under the rule of Epistates, the stadium’s capacity grew to 17,000 and was regularly used until the Roman era began. Unfortunately, the theatre fell into rubble during the Byzantine era, and people completely forgot about it until the 19th century. That’s when locals restored the theatre to the superb condition you see today, and it remains one of the best ancient theatres in Greece.

The Odeon of Athens is one of Greece’s most legendary ancient theatres. Herodes Atticus built the theatre in 161 AD; it was a tribute to the remembrance of his wife, Aspasia Annia Regilla. The notorious Greek traveler and philosopher Pausanias described the theatre as “the finest building of its type”.

The invasion of Erouloi destroyed the theatre just a century after it was built, but the slow process of rebuilding the ruins started during the 19th century. In 1955 the theatre opened again and became the primary location for the Athens and Epidaurus Festival. Visitors today adore the shows inside the theatre, and you can see anything from ballet to musical theatre.

Delphi’s Theatre remains one of the most famous theatres in the country. Locals initially built the theatre in the 4th century BC and it offers an incredible insight into Ancient Greece. Visitors love the spectacular views of the entire valley in the background, an awe-inspiring sight.

The Theatre is on the same site as the Temple of Apollo, but it’s slightly further up. You can visit both simultaneously, which is a huge bonus. In ancient times, the 35-row stadium could hold 5,000 people. However, over time the theatre has gone through many transformations. It is still an impressive site and remains one of the great ancient theatres in Greece.

The Theatre of Dodona is a stunning ancient theatre, just 22km from Ioannina. Until the 4th century, Dodona was a renowned theatre, and only second in popularity to the one in Delphi. The theatre was the Naia festival host and included many athletic and theatre performances.

The impressive structure hosted 15,000 to 17,000 spectators, which is still remarkable in today’s era. Because of the sheer number of spectators, and the fantastic events taking place, the theatre gradually acquired nationwide fame. However, the city slowly fell into decline, and the theatre became ruined for many centuries.

Philippi’s ancient theatre is a remarkable monument and a pillar of Greek history. It covers a vast area in the region of Krinides and receives tens of thousands of visitors yearly. King Philip II of Macedonia built the theatre in the mid-4th century BC.

The theatre grew in popularity through the Roman era, where it became a stadium for fights between wild beasts. That’s why the ancient Greeks built a wall to protect the spectators from any potential dangers with the animals. Unfortunately, like many ancient Greek theatres, it became abandoned until the mid-20th century when locals started using it for events. It’s still a magnificent place to visit today and one of the best ancient theatres in Greece.

The Theatre of Dion is an ancient archaeological site in the Pieria Prefecture. It isn’t in the greatest condition and even underwent renovations back in the 3rd century B.C. However, the careful excavation of the site has allowed insights into the theatre’s origins.

Locals began to reuse the theatre again in 1972 for various plays and performances, and ever since then, there have been regular performances. Organizers regularly hold the Olympus Festival here, and the locals do their best to keep the theatre vibrant and relevant. Although in poor condition, it remains a fascinating place to visit and the local tour guides offer brilliant tours of the ruins.

The Theatre of Epidaurus is probably the best-preserved ancient theatre in Greece. The theatre has been preserved excellently despite being built in the late 4th century BC.

The theatre is in the ancient sanctuary of Asklepios, a therapeutic and religious healing center. Today, luscious green trees surround the theatre. It has become highly-acclaimed for its symmetry and terrific acoustics. It’s evident why the ancient Greeks loved this theatre!

The theatre of ancient Messene was the site of mass political assemblies. It held the meeting of Philip V of Macedon and Aratus, General of the Achaean League, in 214 BC. The next day over 200 prosperous citizens were massacred, so this theatre holds great significance in Greek history.

If you want to see an ancient city in its entirety, there are probably few better places than here. Archaeologists believe there is very little difference between now and what Messene looked like in Ancient Greece. One of the most impressive aspects of this theatre is the orchestra’s size. It covers over 23 metres and is one of the largest orchestras of the ancient theatres in Greece.

The Theatre of Hephaistia was in the ancient town of Hephaistia. Today, it’s a historical site in Lemnos, a Greek Island in the North Aegean Sea. The ancient Greeks named the town Hephaistia after the Greek god of metallurgy. Hephaistos was a cult figure on the island, and this theatre was a tribute to him.

The theatre dates to the 5th century BC and was a focal point of the island. But it was only discovered in 1926 when a group of archaeologists conducted excavations on the island. The theatre remained in ruins for most of the 20th century, before archaeologists reconstructed it in 2004. The first theatre play in 2,500 years was held in 2010.

The Theatre of Delos has stood since 244 BC and it remains a fascinating spot to visit today. It was one of the only theatres in Ancient Greece to be built with marble. In ancient times, the theatre had a capacity of around 6,500.

However, when King Mithridates lost the island in 88 BC the theatre was left to ruin. But in the 20th-century, archaeologists decided to restore and preserve as much of the theatre as possible. The first modern-day performance took place in 2018; incredibly, it was the first performance in 2,100 years. You can visit today and watch many great performances and it remains one of the best ancient theatres in Greece.

The Theatre of Milos is a spectacular ancient Greek theatre near the village of Trypiti which dates back to the 3rd century BC. The Romans later destroyed the theatre and rebuilt it in marble.

Archaeologists estimate that the theatre held up to 7,000 spectators during performances. The great thing about this theatre is the lack of tourists. It is probably the most significant historical landmark on Milos, but due to the lack of tourists, you might get it all to yourself. Since the theatre is situated on a hill and offers impressive views of Milos Bay, you can hike up to it and marvel at the scenery on the way.

The Odeon of Kos was one of the most significant buildings of its era. Archaeologists estimate that the Romans built the theatre around the 2nd or 3rd century AD. Much of the theatre remains well preserved, so you can get a great feel of what it was like thousands of years ago.

Archaeologists found the Odeon of Kos in the early 20th century and were delighted when they saw the ruins had Roman baths and gymnasiums in fantastic condition. The Odeon has a total of 18 rows of seats offering great views. You can witness the marble seats at the front, which the Romans designed for influential citizens of that time.