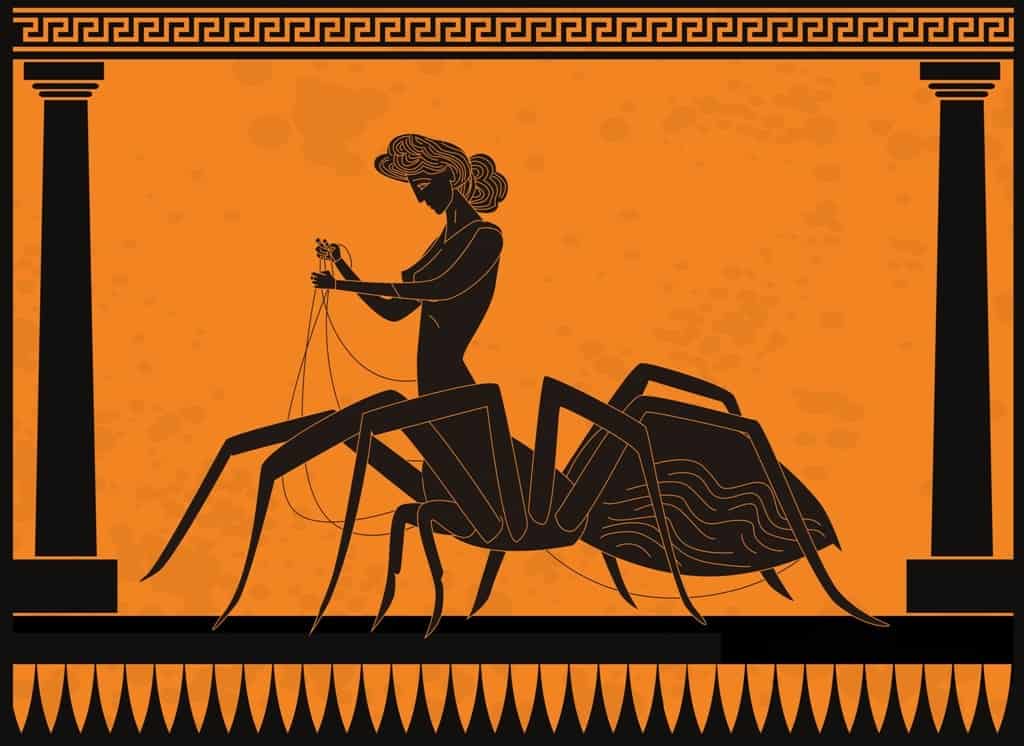 The myth of Arachne is the Ancient Greek origin story of spiders!

As with most origin stories of various plants and animals, the first spider was originally a human, and her name was Arachne- the Greek word for ‘spider’. What is interesting is that the myth also reads like a fable, an allegorical story meant to teach the audience about morals or behavior and its consequences.

The Story of Arachne From Greek Mythology

So, who was Arachne, and how did she turn into a spider?

Arachne was a young Lydian woman, daughter of a famous textile dyer called Idmon. When she was a tiny girl she learned to weave and immediately her talent showed, even as a novice. As she grew, she kept practicing and working on her craft for years.

Her fame spread across the land and many came to watch her weave. Arachne was such a talented and dedicated weaver that she invented linen. She could weave so well that the images on her fabrics were so perfect people thought they were real.

All the attention, fame, and adoration for her weaving made Arachne’s pride soar to the point that she became conceited. When spectators called her talent divine and a gift of the gods, especially of Athena who was the goddess of weaving, she scoffed at the notion.

“My talent does not come from the gods, nor Athena.”
The crowd gasped in horror because insolence in the face of the gods often incurred their wrath. One of her fans urged her to take it back.

“Ask Athena to forgive your audacity,” the fan said, “and she might spare you.”

But Arachne would have none of that.

“Why would I ask for her forgiveness?” she challenged. “I am a better weaver than even her. How could my talent have been her gift if I am better?”

At that, there was a bright light, and Athena appeared before her and the spectators.

“Will you say these things to my face, girl?” she asked Arachne.

Arachne nodded. “I will, goddess. And I will prove my words too, with my deeds, if you wish! We can have a weaving competition!”

Athena accepted the challenge. The goddess and the mortal sat down to weave. People gathered more and more to watch the wondrous spectacle. The weaving went on for days, until finally both Arachne and Athena had produced a tapestry with scenes of the gods on it.

Athena’s tapestry was the most perfect thing mortal eyes had ever seen. As a goddess, the thread she used came from the fabric of the earth itself. She had depicted the gods at Mount Olympus in all their splendor. Each one of them were shown in glory doing heroic deeds. They were so lifelike that even the clouds and the sky looked three-dimensional and with perfect color. Nobody believed that Arachne could top something so immaculate.

But Arachne remained confident, and she unfurled her own tapestry, letting it fall over Athena’s in a flurry.

The people gasped again because they couldn’t believe their eyes. The tapestry was divine. Athena was surprised to see that even though she had used mortal threads, her scenes were vivid and lifelike and powerful. Arachne, too, had depicted the gods in four different scenes separated by exquisite designs.

But there was one big difference.

Arachne’s gods had no glory, no virtue, no kindness. The scenes Arachne chose to depict were scenes where the gods were at their pettiest, their drunkest, their most abusive towards mortals (alternatively, it is said she depicted Zeus and his philandering). To add insult to injury, the tapestry was flawless, even to Athena’s godlike eyes. The detail and complexity of the scenes she depicted were far superior to Athena’s too, and so Arachne’s tapestry was the better one of the two.

This surprised Athena and enraged her. Not only was Arachne better than her but she also had dared to call out the gods and their flaws for all to see! Such insult could not be tolerated. In great, terrifying anger, Athena tore the tapestry to pieces, smashed her loom, and beat Arachne three times, cursing her in front of everyone.

Arachne was shocked and ashamed, and she ran off in desperation. She couldn’t bear what had happened, and so she hangs herself from a tree. That’s when Athena turned her into a spider- a hairy, small creature with eight legs that was hanging from a tree by its own web. Now a spider, Arachne immediately scurried up the web and started weaving more.

“From now on and forever, this is how it will be for you and yours,” Athena said. “You will forever weave your exquisite works, and people will destroy them when they see them.”

And this is how spiders were created in the world.

What is the story of Arachne all about?

The myth of Arachne and Athena is a cautionary tale: it warns humans not to try and compete with the gods because only their destruction will come of it.

It can also be taken as a cautionary tale against conceitedness and pride as a sin: even if a person’s talents are great, if the person is conceited and full of pride, it is likely that doom will soon follow.

In the perspective of a more modern audience, the clash between Arachne and Athena can be interpreted in more abstract ways: for some, it can reflect the struggle between an oppressive authority and a defiant rebel, with all the consequences this might entail if the rebel is too confident or, ironically, too trusting in procedures that cannot withstand the authority’s power.

Is the story of Arachne authentic?

Though the story of Arachne and Athena is one coming from Ancient Greece, the earliest account we have comes from Ancient Rome. It was written by the poet Ovid, during the reign of Augustus.

That poses a few problems!

The main problem is that we cannot be sure this is how the original Ancient Greek myth narrated Arachne’s plight. There was a general trend for Roman authors to depict Ancient Greek gods as less divine and righteous than their Roman counterparts (such can be seen in how the gods and the Greeks are depicted in the Aeneid compared to Odyssey or the Iliad).

But even if we don’t take into account this trend, and consider that Ovid wasn’t seeking to undermine the image of the Ancient Greek gods, there is a good chance that he wrote the myth the way he did in order to make political commentary.

During the reign of Augustus, Ovid was exiled by Augustus during a crackdown and censorship of art he had enforced. So, it could be that Ovid was seeking to criticize Augustus by retelling the myth of Arachne in this way. Considering that at Ovid’s time poets were also called “weavers,” it’s not hard to make a connection between this story, Ovid’s exile, and his disapproval of Augustus’ tactics.

That said, it could be that Ovid did write down the myth faithfully.

We will probably never know!

1 thought on “Arachne and Athena Myth”