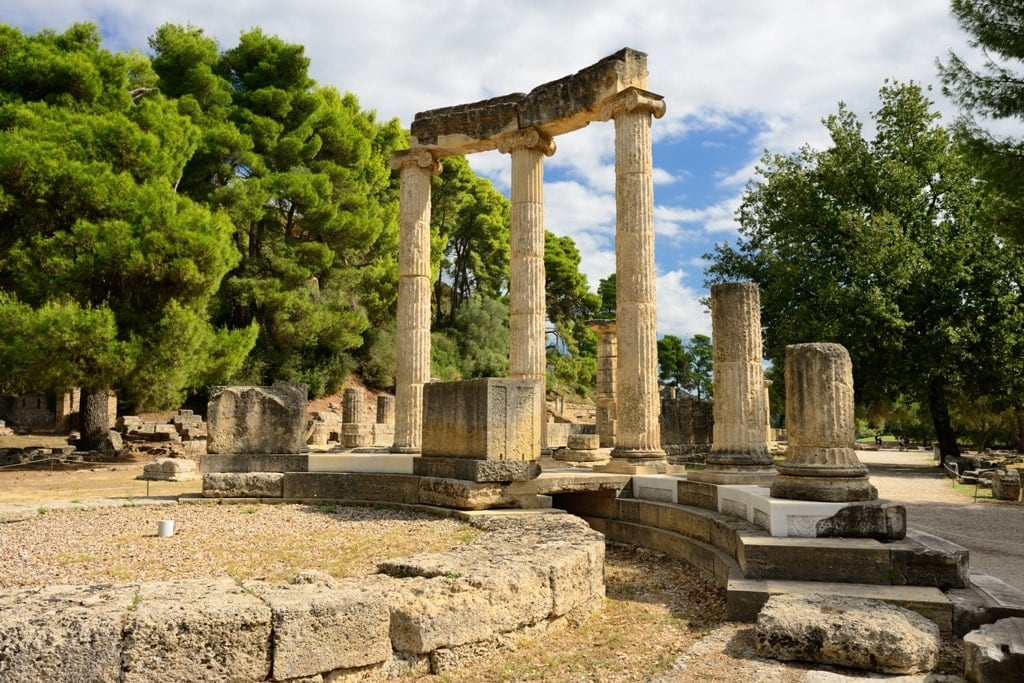 The ancient town of Olympia, situated in the Elis region in the north-west of the Peloponnese peninsula, dates to the end of the final Neolithic period (4th millennium BC), and it is widely considered one of the most important birthing places of Western civilization due to its religious, political and athletic tradition.

Its Pan-Hellenic religious sanctuary was primarily dedicated to Zeus, the father of the gods, although other gods were worshipped there as well. In this location the Olympic Games, the most important athletic event of antiquity, took place for the first time in 776 BC, being held every four years until the 4th century AD.

The archaeological site used to hold over 70 significant buildings, the ruins of many still survive today.

A Guide to Ancient Olympia, Greece

In 776, Lykoyrgos of Sparta and Iphitos of Elis organized the Olympic Games in honor of Zeus and instituted a sacred ekecheiria, or truce. After that, the festival acquired a truly national character.

The sanctuary began to grow and to develop from the Archaic period, with the first monumental buildings were constructed during this time – the temple of Hera, the Prytaneion, the Bouleuterion, the treasuries, and the first stadium.

During the Classical period, the enormous temple of Zeus was also built, alongside many other significant buildings.

Overall, the sanctuary managed to survive the first years of Christian rule under Constantine, with the last Olympic Games being held in 393 BC before Theodosius banned all pagan festivals. In 426 BC, Theodosius II ordered the destruction of the sanctuary.

The site was discovered in 1766, however, the excavations began much later, in 1829, when the French archaeologists of the “Expedition Scientifique de Morée” arrived on the site of the sanctuary at Olympia on 10 May 1829.

Many other excavations took place after that, with research being still underway today since the archaeological site seems to keep a lot of its secrets hidden.

At the center of the Archaeological Site of Ancient Olympia stands Altis, the holy grove, which encompasses the most important buildings, monuments, and statues. The sanctuary of the Altis contained one of the highest concentrations of masterpieces of the ancient Mediterranean world.

The majestic temple of Zeus dominates the area, being the most significant monument there and the largest temple in the Peloponnese. An excellent example of Doric order, it was built around 456 BC; however, the construction of the temple was never entirely complete, since it underwent renovations many times.

It also hosted the splendid gold and ivory statue of Zeus, 13 meters tall, sculpted by Phidias around 430 BC. The statue was considered one of the Seven Wonders of the Ancient World; however, it was destroyed and lost during the 5th century AD.

To the north, there is also a temple dedicated to the goddess Hera, built during the Archaic period, around 600 BC, and destroyed by an earthquake in the early 4th century CE. It was originally a joint temple of Hera and Zeus, chief of the gods until a separate temple was built for him.

The temple of Hera was constructed according to Doric architecture and it had 16 columns on its sides. The Olympic flame is still being lit to this day at the altar of the temple, oriented east-west, and carried to all parts of the world.

The temple also held one of the sanctuary’s most significant and valuable works, the statue of Hermes, the masterpiece of Praxiteles.

In the area, one can also see the Mitroon, a temple dedicated to Rea-Cybele, the mother of the gods, while behind it there are treasures erected as offerings by the Greek cities and colonies. To the west also stands Nymfaion, an aqueduct that Herodes Atticus dedicated to the sanctuary.

There was also the Prytaneion, the Pelopion, and the Philippeion, an offering by Philip II, as well as several other altars, busts, and statues. At the outer side of the Altis, there was also the Bouleftirion, the South Stoa, Phidias’ workshop, the Baths, the Gymnasium, the Palaestra, the Leonidaion, Nero’s mansion, and the Stadium, where the Olympic Games took place, capable of hosting 45,000 spectators.

How to get to the Archaeological Site of Olympia

You can reach Olympia by bus from Athens via Pyrgos, the capital of the region, while by car, it is 290 kilometers from Athens (about 3.5 hours). If arriving by plane, the nearest airport is Araxos, which is mostly used for charter flights. If you enjoy traveling by sea, the nearest ports are Katakolo (34km), Killini (66km) with connection lines to and from the Ionian islands, and Patras (117km).

Tickets and Opening Hours for the Archaeological Site of Olympia

The archaeological site of Olympia is open for tourists all around the year; however, the best time to visit is in spring, since the natural environment is at its best. In the winter, there are usually no waiting lines, while from November to March the tickets for the site and museums are half price.