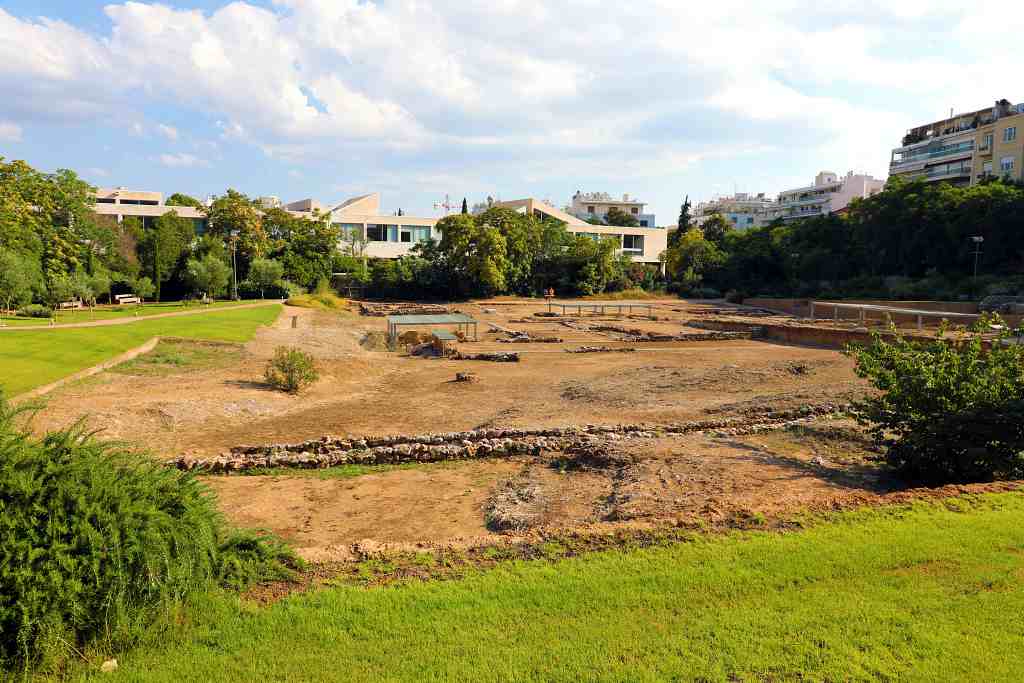 Situated in the heart of Athens and nestling between the Byzantine & Christian Museum and Athens Conservatoire is Aristotle’s Lyceum. It is one of the three oldest gymnasiums – the others being Plato’s Academy and Kynosarges.

The site of the Lyceum covers a tranquil area covering 11,500 meters in a part of Athens known as Lykeion. This archaeological site is immensely important as it was here that Aristotle taught all his scientific and philosophical theories.

For 18 centuries, until the Renaissance in the 15th century, Aristotle was regarded as the font of human wisdom and the leading authority on many disciplines.

The three gymnasia provided young men with both bodily and spiritual education and physical gymnastics were viewed with great importance for personal development- mens sana in corpore sano – a sound mind in a sound body. In the 4th century AD, the schools of philosophy – the first universities providing further education- were founded in the three gymnasia.

Aristotle founded his Lyceum in 335 BC, just outside the city walls on a site between the rivers Iridanos and Ilissos The Lyceum was modelled on Plato’s Academy.  Aristotle’s Lyceum was a peripatic school. This term comes from the Greek word ‘peripato’ meaning ‘to stroll’ and there was nothing Aristotle enjoyed more than strolling in the grounds with his students discussing philosophy, rhetoric or mathematics.

You might also want to check: Greek Female Philosophers.

Aristotle fled from Athens in 321 BC, but his school continued until it was destroyed in the Roman assault on Athens in 86 BC. The Lyceum reopened in the 1st century AD and flourished once again as a school of philosophy.

Aristotle had been a student of Plato- and was Plato’s best student- but Aristotle held differing views on a number of fundamental philosophical ideas. It was these beliefs that led him to start his own school and it was there that he developed his own ideas. He taught his students about his method of inductive and deductive reasoning, how they should observe the world around them and gave them the knowledge of essences and universal laws.

The Lyceum was the first major center of learning to put forward Aristotle’s modern scientific method. As well as teaching, Aristotle spent many hours writing on a range of subjects including ethics, logic, metaphysics, and politics. There were many references made to the Lyceum in works by Plato, Strabo, and Xenophon and it was widely regarded as the highest center of learning.

The site of Aristotle’s Lyceum was not excavated until 1996 when it was discovered in a park behind the Hellenic Parliament and work began under archaeologist Effie Lygouri. Recent excavations in 2011 revealed ruins of a palaestra – where athletes once trained.

It is thought that originally, the sanctuary of Apollo Lykeios had occupied the site but as yet, no archaeological remains have been found. Apollo Lykeios was worshipped there since the earliest times. Apollo was the god of healing and music. He was also the protector of flocks and herds of animals from the wolves and his title comes from the word ‘lykos’ meaning ‘wolf’.

Today, all that remains of Aristotle’s Lyceum is the outline of the various buildings. The palaestra was a facility that was used by athletes to train in boxing, wrestling, and pankration which was a combination of the two. The palaestra was sizeable as it covered an area measuring 50 X 48 meters. It was a large building that ran from north to south, with its entrance on the south side.

The foundations for the palaestra were laid in the latter part of the 4th century BC. The building was used and maintained for over 700 years and was finally abandoned in the early 4th century AD. It is believed that for the last 50 or more years, it was not used as a palaestra.

The building had an inner court with wide porticos on three sides and behind these were a number of rectangular rooms. In the 1st century AD, an apsidal was added to the inner court and this was used by athletes for long cold baths. Other baths were also added and what impressed archaeologists is the perfect symmetry used in the building

Visiting the site of Aristotle’s Lyceum can certainly be inspirational, because although very little remains of the different buildings, many regard the site as ‘hallowed ground’  and certainly the atmosphere is tranquil and thought-provoking.

The grounds have been landscaped in the same style as they were when Aristotle’s used to walk around them discussing and meditating. There are well-tended pathways and fragrant plants and herbs including lavender, oregano, and thyme plus olive trees. As well as being a fascinating site to explore, it is the perfect place to simply relax – as it is a beautiful oasis in the heart of Athens.