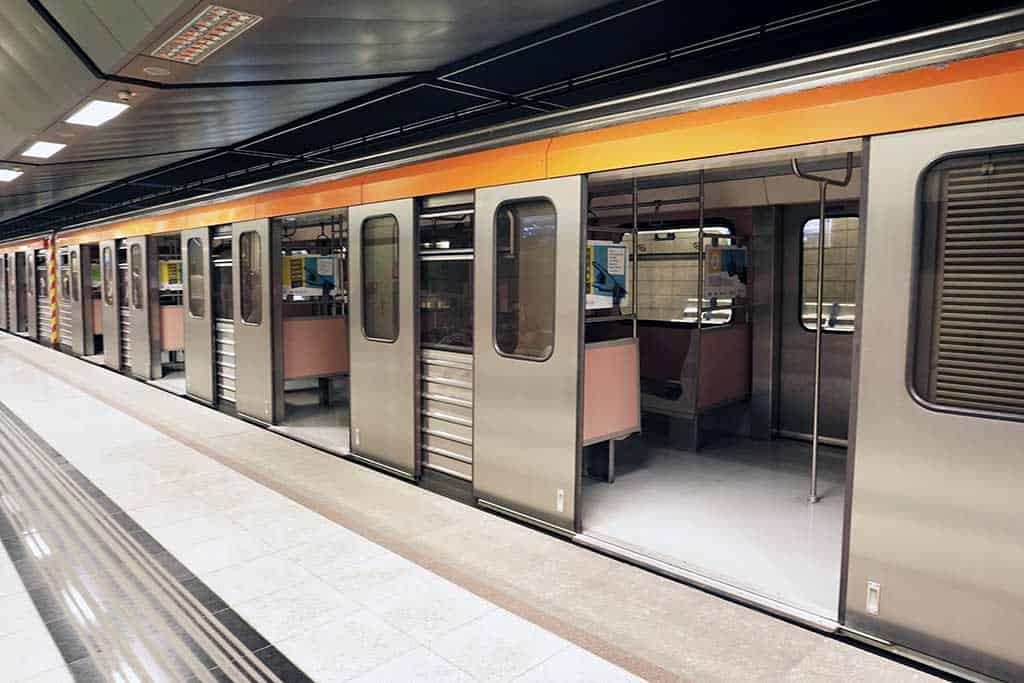 Traffic jams and clogging of Athenian streets and avenues is a daily reality for locals. Many streets are often almost a hundred years old and were built for a time where cars were very scarce and people went everywhere on foot, or at best by tram or horseback.

It doesn’t have to be that way for you!

Thankfully, the Athens metro, the most advanced train and subway system of the capital, is at your disposal to take you swiftly almost everywhere you need to go.

In truth, part of the Athenian metro has existed since the late 19th century: the oldest line, also known as ‘the green line’ that connects the suburb of Kifissia to the port city of Piraeus, has been around and thought of simply as “the train” for more than 150 years!

However, the other lines are new additions, and the railway and subway system keeps expanding.

A Guide to Athens Metro

How big is the Athens metro?

The Athens metro consists of three main lines, the green, red, and blue one.

Starting from the airport at Spata, you will be taking the blue line to the heart of Athens, Syntagma Square, as well as the picturesque Monastiraki with its characteristic square and flea markets, though the line doesn’t stop there. It actually ends at the suburb of Nikaia.

From Syntagma Square you can change to the red line, which can take you to the Acropolis stations, among other places. It starts at Anthoupoli, another suburb, and ends at Elliniko.

At the station of Attiki, if you use the red line, or the station of Monastiraki if you use the blue line, you can switch to the green line which, as mentioned, will take you to the beautiful Kifissia with the century old platan trees and wide assortment of suburban cafes and confectionaries, or you can go to Piraeus to take your boat to the islands!

All three lines have several stops at different stations. Some will get you at different parts of Athens’ center (such as Megaro Moussikis, Syngrou Fix, Panepistimio, Thiseio) which will save you a lot of walking between museums and archaeological sites, and others will take you to different suburbs all around Athens, which is great if you have inside information on great restaurants, bars, cafes, and events!

What types of tickets are there and how much do they cost?

There are several types of tickets and metro cards which you can issue.

You can also purchase bundles of trips, some of which have a discount:

You can also issue a metro card with unlimited trips that last for a specific period of time.

Tickets are issued from automatic vending machines at the metro stations, or from tellers. They are the size of a credit card and can be recharged.

Pro tip 1: keep your ticket with you and recharge it. Not only is it good for the environment, but on the occasion that the vending machines are out of cards (which happens frequently enough), you will be able to recharge your existing one without a problem!

Pro tip 2: Your metro ticket is also valid for buses, trolleys, and the tram! Each 90-minute trip is valid for all of those, no matter how many times you switch within that time period. Just remember it is not valid for the suburban railway or the airport train or buses.

What are the working hours of the Athenian metro?

During rush hour or peak days, trains come approximately every 3 minutes, while on weekends they come every 5 or 10 minutes. This frequency might vary depending on specific circumstances, which will be announced to the public.

What is the Athenian metro’s condition?

The Athenian metro is clean, safe, and efficient. It is always on time and you get information readily whenever you need it.

The one thing you must keep in mind when riding the metro is to mind your belongings. The announcer will remind you anyway but try to keep your bags close to you and your precious belongings deep in pockets that can’t be easily reached.

You will notice on occasion people playing music or begging for money in the train. That is a sad result of the decade-long recession and depression of the Greek economy. While it is up to you whether you donate or not, keep in mind that some people prefer to pickpocket than beg, especially when the train is quite crowded.

Still, if you take only basic safety precautions, you will be fine!

What makes the Athenian metro special?

The unique arrangement of many of the metro stations has turned it into a virtual free museum!

Make sure to visit and enjoy the mini-museums you will find in Syntagma station (complete with a cross section of the ground containing a tomb with the skeleton of an ancient Athenian lady inside), the sculptures and daily use items in the Acropolis station, the meandering complex finds you can see in Evangelismos, and the model of a horse skeleton at Aigaleo station, among many others!

During the construction of the Athenian metro, more than 50,000 archeological finds were excavated, and are on display at the various stations in sleek glass cases and full descriptions for you to enjoy.

Additionally, several pieces of modern art decorate the stations, created specifically for the metro by Greek artists of domestic and international acclaim such as Yiannis Gaitis (at Larissa station), the sculptress Chryssa (Evangelismos station), George Zongolopoulos (Syntagma station), Dimitris Kalamaras (Ethniki Amyna), and many others. Often in certain stations, such as Syntagma and Keramikos, events of photography and performance art will be going on for days!

The Athens metro station will help you go where you want fast, but also give you a near mystical feeling of modernity mixed with the past as you enjoy its displays and happenings.