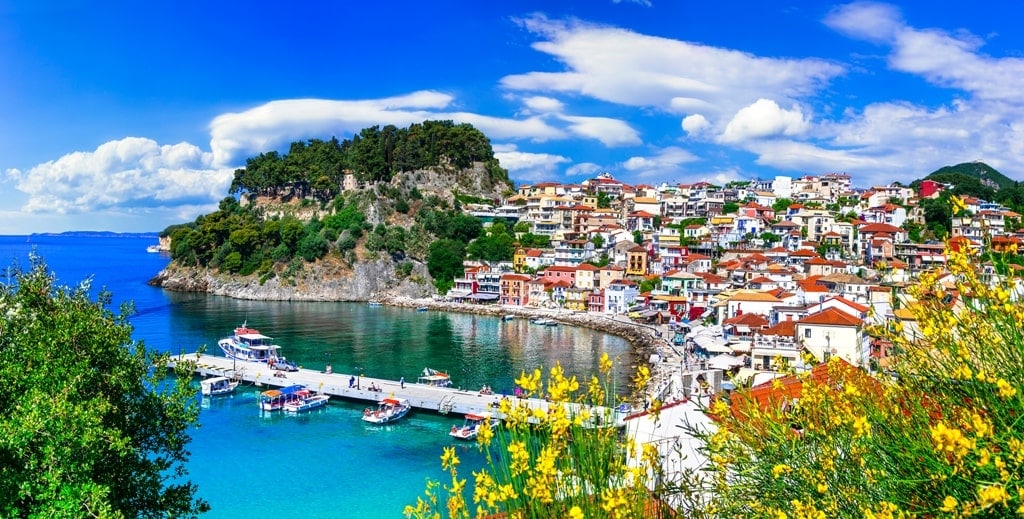 Greece is awash with natural beauty, and its prettiest towns fit right into the landscape. Whether these are whitewashed fishing spots on the islands or historic mountaintop settlements where you can begin a hiking or biking adventure, each has its own charms.

Greek towns are about more than just their appearance too. You can rest assured that you’ll enjoy a warm welcome, friendly hospitality, and delicious food when you arrive.

In this post, we’ll take you on a journey through ten of the most beautiful towns in Greece. Perhaps you’ll spend your next vacation in one of them!

Our first beautiful town in Greece is right up in the Epirus Mountains. Set at 1,200 metres above sea level, it offers spectacular views across the surrounding landscape. In fact, Metsovo is rather picturesque in itself.

There are several attractions including a 15th-century church with a carved wooden temple, a monastery with a watermill, and a castle that dates back to the 17th century. After ticking these off, take a stroll around Metsovo’s cobbled streets, and find a little taverna or café in a square where you can sample local wine and cheese.

While summer means scenic hikes in the surrounding area, Metsovo is also wonderful to visit in winter. Though Greece is usually associated with island hopping and lying on the beach, you can actually ski here!

Check out my post: Things to do in Metsovo, Greece.

Remaining on the mainland for our second town, Kalampaka (also known as Kalambaka) is located in the centre of the country. It’s best known for being the gateway to Meteora, a UNESCO World Heritage site that consists of 24 monasteries, six of which tourists can visit.

Kalampaka has a population of 12,000, but it does get much busier than that during the high season. The town offers a lot to see other than Meteora too – it’s easy to while away an afternoon strolling through the town’s old quarter, Sopotos, and making note of the traditional Macedonian architecture around you.

The monasteries aren’t the only historic religious buildings in Kalampaka. In fact, there’s a 10th-century church as well as the remains of an ancient Greek temple.

Check out: A guide to the Meteora monasteries.

Many of Greece’s most beautiful beach towns and resorts are on its myriad of islands. However, there are a few on the mainland that are sure to take your breath away. One of these is Parga, a quaint town in Epirus with a laid-back vibe.

The town is most commonly visited by Greeks for weekend trips and staycations, but some international tourists make the journey too.

There are lots to see, including two castles, one of which is Venetian and dates back to the 14th century. The other is a ruin called Ali Pasha which provides excellent views from a hilltop.

Take a boat from the town to nearby Valtos and Lichnos, two of Greece’s best beaches.

A famous yachting destination, Galaxidi is on the north of Central Greece’s Corinthian Gulf. In days gone by, it was a busy and prosperous port – you can learn all about the town’s history at the small but excellent Nautical Museum.

For those who want to stay on dry land, there is a wide selection of cafes and tavernas where you can grab a coffee and baklava while watching the ships come in and out of the harbour.

Galaxidi has a popular cultural event on the first day of lent. It’s called alevromoutzouroma. If you’re struggling to pronounce that, Clean Monday will suffice!

Last but not least, Galaxidi is just half an hour from Delphi – the perfect base to visit one of ancient Greece’s most important sites.

This beautifully preserved town is the capital of the Mani Peninsula in the Peloponnese. Formerly called Tsimova, it was renamed after Ares, the God of War, and sits at the foot of the Agios Elias Mountain. At the same time, it offers views out over the Messinian Gulf.

The town’s central square includes a statue of Petrompeis Mavromichalis, who in 1821 proclaimed the Maniot insurrection against the Ottoman Empire. Around the statue, the square boasts several quaint cafes and restaurants where you can soak up the laid-back atmosphere of this gorgeous town.

Naxos is the largest island in the Cyclades, and Naxos Town (also known as Chora) is the ideal base from where to get to know the island. The cobbled streets lead to a 13th-century castle that overlooks the town and the blue of the Aegean Sea.

A little outside the town, you’ll also find the Apollo Temple which is a wonderful place to watch the sunset. Photographers can use the columns of the arch at its entrance to take a memorable snap.

As well as the castle and temple, there are several museums, monasteries, churches, and Venetian mansions in Naxos town – many of which are in the Kastro, the community within the castle walls.

Chora is often the name used for the main town on islands in the Cyclades. That’s certainly no different for Mykonos. Though the island is known for its legendary parties, you can find some peace and quiet in the island’s main town if you know where to look.

Check out the statue of Petros the Pelican, a local legend who was nursed back to health by the locals and now guards over the colourful Little Venice District. Alternatively, find some tranquillity at the stunning Panagia Paraportiani Church. Of course, you can’t miss the town’s cluster of five windmills!

The downside of Mykonos Town? You’ll find that it’s much more crowded than many of the other entries on this list. Especially if you visit in high season!

Like the sound of the Cyclades but don’t want the crowds of Mykonos or Naxos? Then you need to head for Syros instead, and the town of Ermoupoli. Named after the Greek messenger god Hermes, it was Greece’s principal port for a brief period in the 18th century.

That wealth can be seen in the mansions and squares that line the Vaporia District, but it’s the older buildings that are most impressive. Medieval churches and monasteries still stand – like much of the Cyclades, you have those obligatory whitewashed houses.

Molyvos cascades down the hillside from the Byzantine Castle that overlooks the town. Also known as Mithymna, some say it’s the prettiest town in Greece. The views from the castle will certainly take your breath away, especially at sunset!

The town is packed with stone houses which are very different from the Cycladic Houses Greece is famous for. Then again, Lesvos is much closer to Turkey’s mainland than the Cyclades!

Molyvos is the tourism capital of Lesvos, and it may sometimes feel a bit crowded. However, the good news is that it’s very easy to escape the crowds, as the town is well-connected and lots of tours on land and water leave from there.

Our final beautiful town in Greece is Gythio in the south of the Peloponnese on the Laconia Peninsula. It’s the largest town in the Mani region and a great base from which to explore the peninsula’s wild landscapes, ghost villages, and golden-sand beaches.

Wildlife lovers should put Gythio on their Greece itineraries as turtles come here every summer to lay their eggs. Seeing this is a real bucket-list opportunity!

Away from the beach, Gythio also has an ancient theatre above the town and a traditional Mani tower at the entrance to the port.