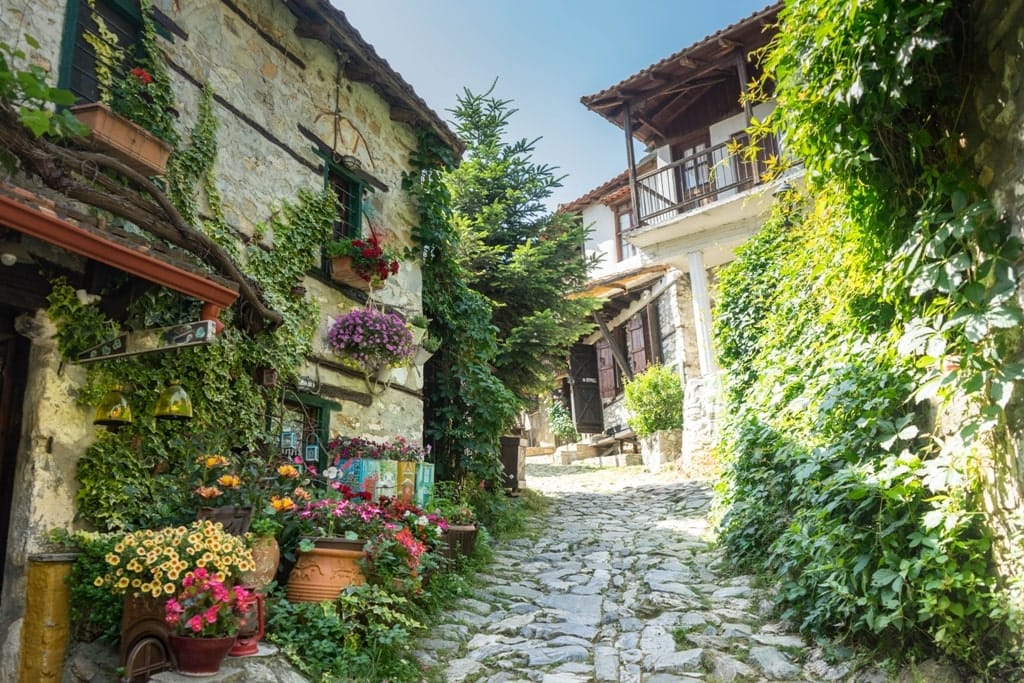 Greece is more than sun, sand, and sea. To get off the beaten tourist track, consider heading away from the cities and tourist towns, and spending your vacation in a village.

Villages in Greece are truly special. Each has its own distinctive character and personality, depending on its history or location. One thing is for sure – the legendary Greek hospitality means that you’ll be welcomed with open arms like a long-lost family member when you show up!

To practice your Greek, see genuine island (or mainland) culture, and try some of the most delicious Hellenic food. There’s nowhere better than a quaint, Greek village.

In this post, we’ll take a look at 12 of the most beautiful villages in Greece. Let’s go!

Our first beautiful village in Greece is hidden right up in the mountains of Tzoumerka in the west of the country. Built on a steep slope initially for defense purposes, there are no roads, and cars are not allowed. But that’s part of Syrrako’s charms!

Connected to neighboring Kalarrytes by a stone bridge over a ravine, Syrrako is popular with foodies. You can sample some of the finest Greek cuisines here including juicy olives and rich hearty stews. Old houses have been converted into hotels for a warm and welcoming place to stay the night.

A fun fact about Kalarrytes is Bvlgari’s founder hails from here! If you want to get to know the heart of the Epirus Mountains better, put Syrrako and Kalarrytes on your list.

The region of Zagorochoria is known for its picturesque villages, and Papingo is arguably the most distinctive of them all. There are two Papingos – Megalo and Mikro, and Megalo is the gateway to the stunning Vikos Gorge in the Vikos-Aoos National Park.

The reason that more tourists visit Papingo than any of the other 46 villages in the region is the kolimbithres. These granite rock formations have been sculpted by nature to create small pools just a stone’s throw from the village.

They’re the perfect place to rest your aching muscles after hiking through the gorge or in the national park!

Standing proudly at an altitude of 1,350 meters above sea level, Nymfaio stands on the slopes of Mount Vitsi (also known as Vernon). The name comes from “nymph” which suits the beautiful isolation of the village perfectly.

One of the most stunning and secluded villages in Europe, Nymfaio is the ideal place to learn about the region’s history. There are museums relating to both gold and silver, as well as history and folklore. If you are interested in more natural affairs, head to the environmental center that protects brown bears and wolves fifteen minutes from the heart of the village.

Makrynitsa in Pelion offers some of the most stunning views in all of Greece. Hanging from the side of a green mountain, its position at 600 meters above sea level means it’s also been given the name the “Balcony of Pelion”.

From its main square, you can admire panoramic views of the nearby city of Volos and the mountains around. The village is not just renowned for views – it’s a fascinating place in its own right. There are over 60 traditional fountains in the village, one of which supposedly has “immortal water”.

Makrynitsa also hosts concerts, festivals, and exhibitions throughout the year, so you can embrace the culture here too.

Located in Arcadia, Dimitsana is one of three villages in this mountainous region (along with Stemnitsa and Andritsaina) that encapsulates the Peloponnesian idyll. Its popularity among Greek tourists hasn’t spilled over to those coming from further afield just yet!

During the Greek revolution, the village’s watermills produced gunpowder and flour, which you can learn more about at the museum in the village. Once you’ve finished there, head onto its historic library. Though many of its books were destroyed during the revolution, it still boasts an impressive collection.

Nowadays, the tranquil village is a popular base for hikers in summer and skiers in winter. Warm weather travelers should spend at least one morning planning a hike in a rustic village café.

Want a traditional Greek village where you can make the most of mountain air and sea views? Paleos Panteleimonas (also spelled Palaios Panteleimonas), near Thessaloniki, is where you should head for.

It stands on the slopes of the tallest mountain in Greece, Mount Olympus, and gives you a 700-meter head start if you’re planning to reach the summit.

Old Panteleimonas is actually a protected Greek monument, and its houses are a mix of Macedonian architecture and Eperiotic elements, such as those you would see in the Pelion peninsula.

From its lofty position atop a hill, Vathia offers up spectacular panoramas of the Mani Peninsula and surrounding coastline. However, the town is almost completely abandoned.

Built in the 18th and 19th centuries, the village has a rich history, and there were often family and clan feuds which spilled into the village. The homes here are examples of traditional Mani tower houses and have been compared to the spikes along an iguana’s back.

Vathia does actually have a restaurant and a guesthouse, and you can explore the abandoned houses should you wish to. You could incorporate a visit to the village into a hike, especially if travelling during spring and/or summer.

One of the most popular attractions on the Ionian island of Kefalonia, the tiny village of Assos is set on an isthmus between the mainland and what’s left of a 15th century castle. The colourful houses framed by an azure bay to the front and mountains behind really is a spectacular sight!

Bays on both sides of the isthmus are perfect for a swim to cool off on a summer’s day, while there are a handful of cafes and tavernas where you can pick up a bite to eat.

The village’s distinctive blend of Ionian and Venetian architecture was damaged during an earthquake, but the buildings have been restored to their former glories.

Oia is without a doubt the most famous beautiful village in Greece. Pronounced Ia, you’ll have seen Oia in travel brochures, on TV programs, and you’re probably desperate to go there in person!

Oia is one of four settlements on Santorini, and it’s built into the side of a volcanic caldera. Famous for its whitewashed houses and blue-domed churches, this island in the Cyclades is one of the top tourist destinations in Greece.

It can get pretty busy, but there are a few spots where you can escape the crowds. One is the hillside just outside of the village – the perfect spot for watching the sunset.

Built upon a hill covered with olive and pine trees, Lefkes is the former capital of Paros. There are 500 inhabitants who enjoy the views out to Naxos from 300 metres above sea level.

In the village, you’ll find whitewashed windmills, 15th-century churches, and a mixture of Cycladic and Venetian architecture. Be sure to check out the Museum of Aegean Folk Culture and the Church of Agia Triada where you can see rare Byzantine icons!

Lefkes is still relatively untouched by mass tourism, so you can enjoy an authentic impression of the Cyclades islands that would be harder to find on Santorini or Naxos!

Naxos is the largest of the Cyclades Islands, and the mountain range that runs through it reaches up to 3,000 feet above sea level. One such mountain is Mount Fanari, which the picturesque village of Apiranthos clings to the side of.

It’s 26km from the island capital, 650 meters above sea level, and there’s plenty of here to satisfy a curious tourist on a day trip. There are no fewer than five museums – they’re dedicated to archaeology, geology, natural history, visual arts, and folklore. One of the oldest churches on Naxos can be found here too – Panagia Aperathitissa.

When you’ve finished soaking up culture, history, and facts, head to a taverna with a view out over the Aegean Sea.

Another name for Pyrgi is the painted village – named as its homes are decorated with white and grey geometric decorations known as “xysta”. The style is similar to Italian sgraffito, and it is thought to have been brought from Italy during Genovese rule. The patterns are a stark contrast to the brightly coloured flowers and plants that spill out from residents’ gardens.

Pyrgi is also one of 24 villages on Chios where the mastic tree is cultivated and the area is sometimes colloquially referred to as “mastichochoria”. Mastic is a gum resin that was used for culinary and medicinal reasons in medieval times.