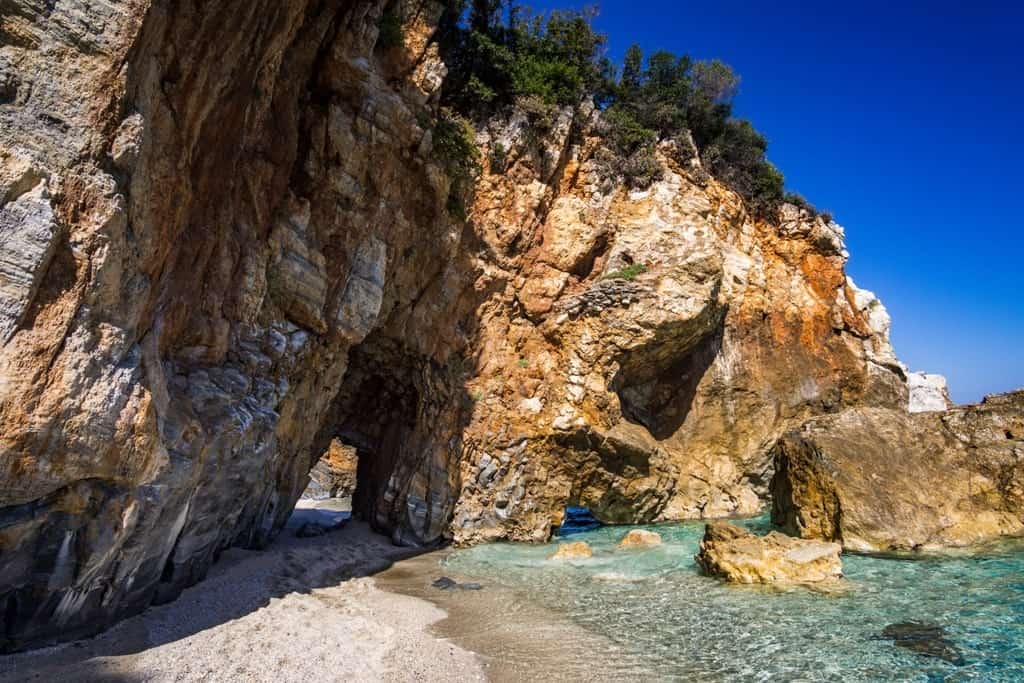 The Pelion Peninsula on Greece’s mainland hosts a collection of picturesque villages, beaches, and natural landscapes that are just waiting to be explored. The best beaches lie on Pelion’s eastern side, with azure waters lapping at golden shores with cliffs and verdant forest backdrops.

The closest main city to the Pelion beaches is Volos (50km to the west) which has an airport and bus station, or you could stay in one of the resort villages of Tsagarada, Agios Ioannis, or Horefto. Whether you want to spend every summer’s day at the beach or just want to take a seaside stroll while visiting the area, Pelion’s beaches are sure to have you covered.

Read on to find out all about the best beaches in Pelion so you can start planning your trip!

Check out: A Guide to Pelion, Greece.

Mylopotamos Beach in Pelion is a white pebble bay surrounded by high jagged cliffs that offer a dramatic backdrop for photography as well as offering shelter from the wind. Visitors can admire the view of the cove from above first before descending down the staircase to the bay.

The bay itself is split into two parts with a small path between the rockface leading between the two. In summer Mylopotamos has a lifeguard tower, sunbeds, parasols and a taverna while in off-season months it’s a little more low-key. This is a great spot for swimming, sunbathing and cliff-jumping and gets pretty busy in summer.

Agios Ioannis Beach is a long stretch of white sand in front of the town’s guesthouses, restaurants, and studios. The bay starts with a small promenade with benches and street lamps before you step down to the soft sand and clear turquoise waters.

Parts of the beach are covered with natural rocks that wash up on the shore, another is filled with sunbeds and parasols and there are a few other sections that are open for you to simply lay down with your towel. There are plenty of amenities in and around the resort beach of Agios Ioannis and the beaches of Papa Nero and Plaka are also close by.

Fakistra Beach is one of the most beautiful beaches in the Pelion region, so much so that it was used for some of the scenes in the 2008 film Mamma Mia! Like Mylopotamos, Fakistra Beach is surrounded by towering cliffs and lush vegetation and features a sandy/rocky cove and clear, cerulean waters.

Visitors will need to walk around 15-20 minutes downhill to reach the beach but it’s well worth it. It’s best to head to Fakistra Beach in the morning to make the most of the sunshine before heading to the nearby Sea cave of Panagia Megalomata which lies one bay further north.

Damouchari Beach is one of the quieter coves in the region that is used as a small fishing port and is loved by locals. The beach is a mix of sand and pebbles and the entrance to the water is rocky underfoot. At one side of the bay is a small taverna and at the other is an old ‘castle’ ruin and the Damma Mia beach house built into the rock face.

Located right next to Agios Ioannis, Papa Nero Beach is a popular spot among locals and tourists alike thanks to its great facilities and calm, clear waters. The shingle beach features sunbeds and umbrellas as well as sometimes having a beach volleyball net up and kayaks available for hire. There is also plenty of unorganised space where you can bring your own deck chairs or just pitch up with a towel.

Horefto Beach is one of the more northern beaches along the Pelion coastline and offers 2km of soft golden sand on which to relax! Some areas of the beach have sunbeds, parasols and a lifeguard on duty while others are left more natural. Backing on to the beach is plenty of parking and a number of restaurants, shops and accommodation options.

Potistika Beach is located towards the southern end of the peninsula near Xinovrisi and is a very popular spot in summer. The majority of the beach is left unorganized but there are some sunbeds available during the peak summer months.

The beach features sand and shingle underfoot and the clear water has some rocky outcrops to watch out for. The water gets quite deep quite quickly so it’s important to keep an eye on the kids at all times. There is a beach bar located to one side of the beach and there are a handful of other tavernas nearby.

Agia Saranta is another of Pelion’s pristine beaches with soft sand and pebbles, three beach bars and a mix of organised and unorganised sections. The water here can be unpredictable at times with winds making the waves really pick up, so Agia Saranta is best visited on a day with calm, clear weather.

The water also gets deep quickly so it’s best for stronger swimmers. While the roads are quite narrow getting into Agia Saranta Beach, the community here have tried hard to make it accessible as possible, with parking attendants (during summer) helping point you in the right direction when you arrive.

Plaka is a beautiful pebble beach just north of Agios Ioannis that can be reached on foot via a short path or via the parking lot at Eden Hotel. Please note that you’ll have to pay 6 per day to park here but this is easily the most accessible way to reach the bay if arriving by car. This beach tends to be much quieter than Agios Ioannis, especially in the shoulder season months of June and September.

Ombrios Beach (Paralia Ovrios) in the north of Pelion is a rugged, natural beach with sand and pebbles that is one of the quieter beaches in the region. The beach/area here is sometimes referred to as ‘Old Mitzela’ named after the abandoned village that lies in the forest above the bay. Paralia Ovrios is ideal for swimming, exploring caves and wild camping and is great for those wanting to get off the beaten track.

Paltsi Beach (also known as Agios Konstantinos) is one of the southernmost beaches in eastern Pelion; its natural, rugged landscape is a favorite among travellers who prefer a more secluded beach offering. While there are some tavernas and guesthouses nearby and access is fairly easy, Paltsi tends to be one of the quieter beaches and is great for sunbathing, swimming, snorkelling, and rock jumps.

Platanias Beach is located right on the southern tip of the Pelion peninsula, around two hours from Volos. It comprises a golden sandy beach, a small taverna, and a little fishing port. It is also the location for connections to Skiathos during the summer months. The beach is pretty and peaceful and visitors can walk to the nearby Mikro beach too for an even quieter spot.

Another fishing port beach along the Pelion coastline is Katigiorgis Beach (also known as Agios Giorgios) on the southeastern side of the peninsula. The beach is backed by lush green trees, restaurants, and guest houses and the water here is crystal clear! The sandy part of the beach itself is quite small but offers enough space for you to choose whether you want a sunbed or would prefer to relax on the sand.

Hopefully, by now you have more of an overview of some of the best beaches in Pelion. From windy bays and cliff-jumping spots to peaceful coves and quaint fishing villages, Pelion really does have it all. You could easily choose to stay in one spot like Agios Ioannis or Horefto for your whole stay, or beach hop between them discovering which one is your favourite!

Let me know which are your favourite beaches in Pelion in the comments below!