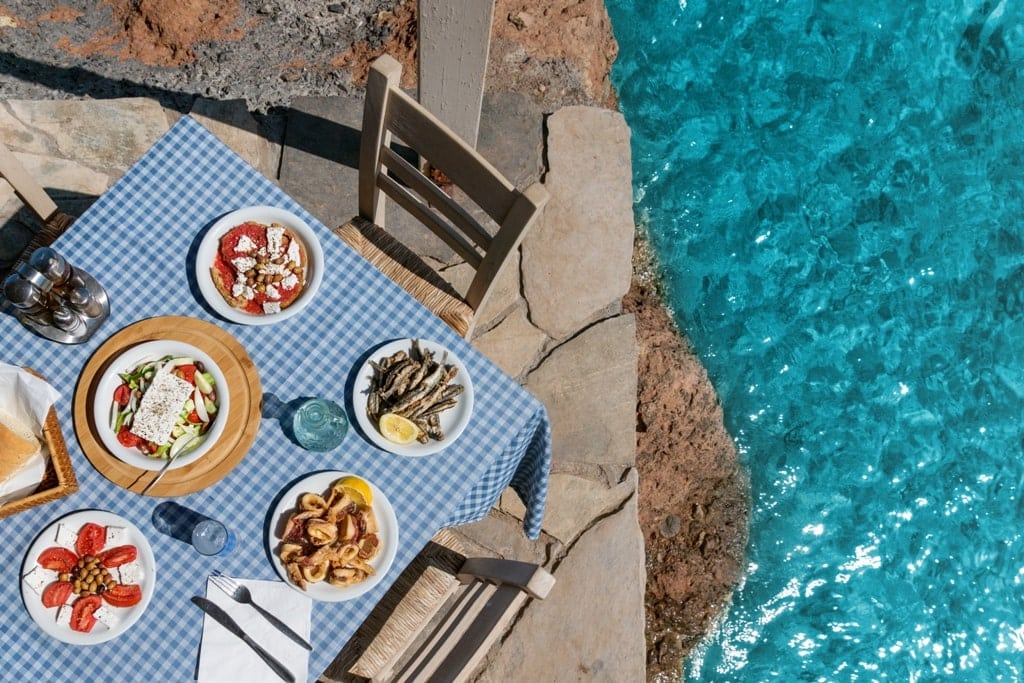 No trip to Greece is complete without sampling the country’s rich and delicious cuisine. Like many Mediterranean countries, the trinity of wheat, olive oil and wine can be found pretty much everywhere. It is, of course, complimented by fresh meat, fish, and vegetables.

It’s not only rich and flavourful, but the Mediterranean diet is regarded as one of the healthiest in the world, and it’s even recognised by UNESCO as a cultural heritage of humanity.

Whether you want tasty and refreshing starters such as dolmades, delicious main courses like moussaka, or scrumptious desserts such as baklava, you’ll be right at home when visiting Greece and ducking into characterful tavernas.

In this post, we’ll take a look at ten of the best Greek islands for food. By the end of it, your mouth will be watering – or maybe it is already!

As the largest island in the country, Crete has its very own Greek island cuisine. It boasts diverse gastronomy, and there are several dishes you should look to try when traveling here. You’ll find a lot of Cretan pies, including chaniotiko boureki, a zucchini and potato pie from the Chania region; sarikopitakia, filo pastries filled with sheep’s cheese then fried in local olive oil; and sfakianes pites, cheese-stuffed pancakes with dough made of raki and olive oil. You really can’t go wrong with a menu like this!

If you’re looking for something lighter than a pie, traditional Cretan salad dakos is a winner. Similar to bruschetta, fresh tomatoes and creamy cheese are lain on top of barley rusks before being sprinkled with seasoning and olive oil. Whichever meal you’re enjoying, there’ll be a delicious wine to accompany it too!

Sifnos is home to the Cycladic Gastronomy Festival, and its high-end restaurants are known for attracting Hollywood royalty! It’s also where one of the earliest and most comprehensive books on Greek cuisine was written, by chef Nikolaos Tselementes.

However, you don’t need to have bucket loads of cash to sample the best dishes in Sifnos. Its bakeries boast sweet treats such as amigdalota, soft almond cookies rolled in sugar; and halvadopita, nougat wafers covered in honey and almonds.

Fancy something savory? Then head to Hersonissos which has several tavernas known for their excellent seafood. It’s possible that Sifnos is the best Greek island for foodies.

Another of the Cyclades islands, Naxos is actually the largest. Thanks to its mountainous interior, there are a lot of hearty and rich stews here made with slow-cooked meats and potatoes.

Many tourists will not want to leave Naxos without taking some local cheese with them – arseniko, graviera, xynotiro, and xynomyzithra are the most popular, but good luck trying to pronounce the last two!

The citron fruit is abundant throughout the island too. This thick-skinned citrus fruit looks similar to a large lemon. It’s made into a liqueur called kitron, and you’re sure to be welcomed into the fold of a Naxian village with a few shots of it.

Best food and drink to try in Naxos: Cheese and kitron.

One of the most popular destinations in the whole country, Santorini is a wonderful place to experience Greek islands cuisine. The island has some of the best restaurants in Greece, and although you can find an array of international foods here such as sushi and pizza, we suggest you try local for the biggest rewards.

Santorini is great for vegetarians – street food you can easily pick up includes fava (which is similar to hummus), ntomatokeftedes (tomato fritters) and white aubergines which are often pureed and served as a side.

Carnivores will be pleased to know that there’s meat and fish aplenty too, which is often served paired with fine wines from a range of wineries on the island.

Still not got your fill of Cycladic food? The administrative capital, Syros, provides another dimension to Cycladic cuisine. Syros’ water is said to make loukoumia (better known as Turkish Delight) some of the tastiest you’ll find outside of Turkey itself! Another popular sweet dish is halvadopita, a nougat pie which is a little different from its counterpart on Sifnos.

Savory food includes sausages flavored with garlic and fennel and spicy San Michali cheese. Want to try Syros cuisine? Plakostroto in Ano Syros is one of the most popular tavernas on the island, and it grows its own vegetables and herbs.

Corfu has been ruled by many different people throughout its history, and that shows in its food. Though the French and British have ruled Corfu, it was the Venetians who left the most obvious mark. You’ll even notice several dishes with Italian-sounding names here!

The most popular include sofrito (fried beef in sauce with a side of potatoes), stifado (a beef stew), and the island’s trademark dish, pastitsada. Meat is slow-cooked in a mixture of herbs and wine before being served with pasta and topped with cheese. Exquisite!

On many islands in Greece, you’ll get something called the ‘tourist menu’. Though it’s not completely unheard of here, it’s very uncommon. A lack of mass tourism has meant that Lemnos, in the northeast Aegean, has remained true to its original cuisine. The island is known for its rich and salty olives, which make for perfect oil.

A unique dish you can try here is flomaria pasta, which is made with flour, sheep’s milk, and fresh eggs. You really won’t find it anywhere else! Traditionally, you’ll find it covered in melted butter and grated cheese, but it’s also found in soup and with meat/vegetable dishes.

Local cheeses include kalathaki limnou and melichoro, while ancient grains and cereals are popular in Lemnos cuisine too. Wash down meals on Lemnos with Moscato Alexandria’s wines.

Tourism is on the up in Milos, and it has a burgeoning restaurant scene to match. It’s quite reserved and unpretentious compared to its Cycladic neighbours like Santorini and Sifnos, but there are a good few dishes that you’ll want to make sure you sample!

Bouyiourdi is a stew of tomatoes, feta and spicy peppers, while katsikaki is young goat baked in paper. Despite the meals being hearty and warming, most family tavernas here are very affordable. You may be surprised to know that Milos is a popular destination for Athenian foodies. If it’s good enough for them, you should enjoy it too!

Lesvos is the third largest island in Greece but most surprisingly, it produces more than half of the country’s ouzo. If you’ve never tried it before, ouzo is a liqueur made from the remnants of wine-making and flavoured with aniseed. It’s pretty strong and a few glasses might leave you with a headache the following day!

Lesvos is also famed for its olive oil, and there are several agritourism destinations across the island where you can sample high-quality olive oil and wines. Its location close to Turkey means that it has taken Byzantine (and further eastern) influences into its cuisine. Foodies should make for the island in July when the Lesvos food festival takes place, and you can sample many local delights.

Chios is known as ‘the fragrant island’ and is located in the northeast of the Aegean Sea. It’s the 5th biggest island in Greece! Chios is probably best known for the mastic trees which grow here. Since medieval times (and possibly before) these trees have yielded a teardrop-shaped resin (known as the tears of Chios) which has been used in medicine and cooking.

Mastic has anti-inflammatory, anti-microbial and healing properties and can relieve stomach disorders. Nowadays, you can find it in alcoholic beverages and chewing gum. But it’s not only used in food – it is also used in skincare and body hygiene products.

Best food and drink to try in Chios: Mastic sweets and drinks.