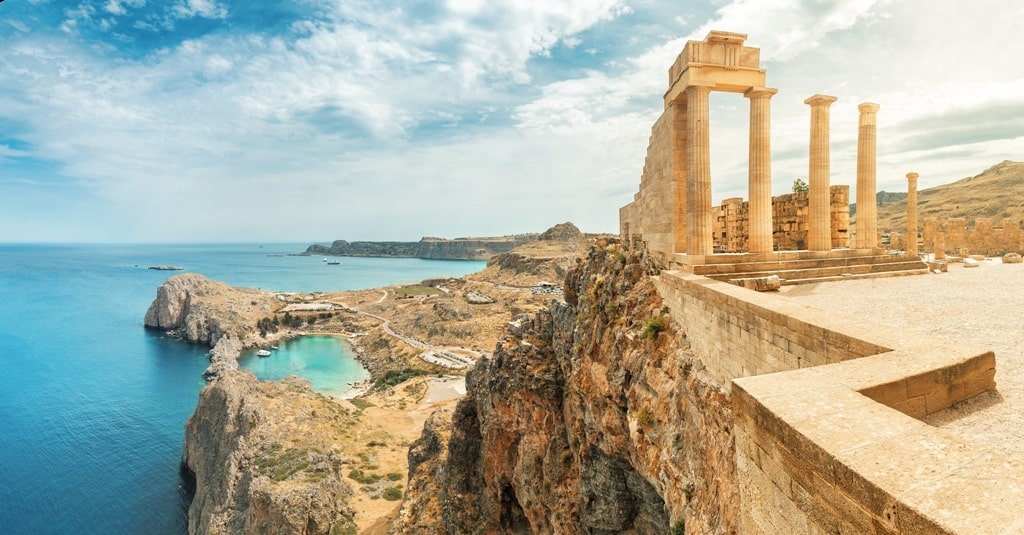 It’s challenging to think of a better country for history in the world than Greece. Greece has the most incredible, rich history dating back thousands of years. There is a reason why Greece is the 13th most visited country globally, and one of the main reasons is the rich cultural history.

Unsurprisingly, it can be a challenging task to decide where to go in Greece for history. The truth is that you can find ancient history almost everywhere! But we have researched and found the best Ancient Greek islands for history and we can let you in on what makes them so historic!

8 Greek Islands for History and Culture

Naxos is the largest island in the Cyclades. Visitors love the beautiful nature and beaches, but they love the rich history even more. It is no wonder that it is one of the best Greek islands for history. The stand-out historical attraction on the island is the Temple of Apollo, a vast marble doorway that stands as the island’s main focal point.

Historians suggest that the Temple of Apollo is where Theseus abandoned Ariadne, the princess of Minoan after he murdered Minotaur on Crete island. Furthermore, the Temple of Demeter is an excellent historical attraction. The temple dates back to the 6th century BC and includes some of the finest Naxos marble on the island.

Other interesting sites include: The Ancient Temple of Dionysus at Iria, the Kouros at Melanes, the many towers scattered around the island, the Paleochristian Church of Panagia Drosiani, the Kouros at Apollonas, and the castle in Chora.

Crete is the biggest island in Greece and remains extremely popular. Visitors love the hiking scenery, old villages, and gorgeous beaches, but they also adore the rich history. Knossos Palace is one of the main historical focal points of the island, and it dates back to around 2000 to 1580 BC.

The palace was the home of King Minos, and Sir Arthur Evans first saw the site during an excavation in 1900. Another tremendous historical attraction is Phaistos, which is in Central Southern Crete. This site was first established around 4000 BC, during the Bronze age, and the palace was destroyed around 1400 BC. However, archaeologists found the area during an excavation in 1874. If you’re looking to experience Greek island’s history and culture, Crete is for you.

Other interesting sites include: The archaeological museum in Heraklion. the monastery of Arkadi, the archaeological sites of Aptera, Gortyna, and Eleftherna, the Minoan Palace of Kato Zakros.

Rhodes remains a trendy tourist island with millions of visitors annually. They come for the incredible beaches, food, and scenery, but the island’s history also plays a pivotal role in its popularity.

Rhodes has some of the best old landmarks out of all the Ancient Greek islands. One of the focal points is Rhodes Medieval Old Town which is hugely popular with visitors. It is a combination of churches, restaurants, and mosques, and it is surrounded by ancient walls – truly stunning.

Another historical attraction is the Lindos Acropolis. Not only are the ruins beautiful, but there are incredible views that go along to match. The Lindos Acropolis dates back to the 4th century BC, and you can visit the Theatre of Athena, Four-Portico building, and much more in this area. In addition, if you’re in Rhodes, you should see the Ancient Kamiros temple. The Dorians established the temple in the 5th century BC, and it remains a fascinating spot.

Other interesting sites include: Filerimos Monastery, the archaeological site of Ancient Kamiros, Monolithos Castle, and the Castle of Kritinia.

Delos is a superb historical island next to Mykonos. However, you can’t stay on the island overnight – it is only possible to visit via a day trips from either Mykonos or Poros, but it is worth it. The island is home to the Archaeological Site of Delos, a top-rated historical attraction. These ruins symbolize the births of Artemis and Apollo’s birth, two of Zeus’s many children. Furthermore, the site is a UNESCO World Heritage Site and continues to attract the world’s best archaeologists.

The Archaeological Site of Delos remains one of the most important cultural, historical, and archaeological ruins in Greece. Furthermore, you should check out the Archaeological Museum of Delos. Visitors know the site for its extensive ancient statues from nearby areas. It is no wonder Delos is one of the best Greek islands for history.

Lemnos is in the North Aegean Sea, situated next to Samothraki and Lesvos’s famous islands. The island has a rich history, but it manages to stay under the radar despite this. You may even enjoy some historic attractions by yourself during the winter months. A common interest is Ancient Poliochni on the east of Lemnos. The ruins date back to 4000 BC and have some really fascinating history.

If you head to the north of Lemnos, you’ll find the Ancient Ifestia. The Pelasgians founded the area and made it the second-largest settlement in Lemnos during ancient times. You should also visit the ancient site of Kavirio which dates back to the 6th or 7th century BC. With such an array of ancient ruins, it is no wonder why Lemnos is one of the best Ancient Greek islands.

Santorini never goes under the radar when people discuss Greek island. It is super popular, and very touristic. But that’s for a great reason – it’s one of the best Greek islands for culture. Visitors love visiting the Akrotiri archaeological site which dates back to The Bronze Ages. It was one of the most important ports in the Aegean Sea until a massive volcano erupted between 1620 and 1530 BC and covered the site in ash.

Another excellent attraction is Ancient Thera, an ancient ridge situated on the 360m Mesa Vouno Mountain. It is a fantastic hike to the top, and you’ll enjoy excellent views along the way. Once you arrive, you’ll find the ruins of a city occupied from 9th century BC till 726 AD.

The ruins once served as a naval base for the Ptolemies from ancient Egypt. Later, during the first and second centuries, the city was occupied by the Roman Empire. However, it gradually fell into decline after 726 AD when a volcano erupted and left the city abandoned. Humans didn’t find the ruins for many centuries later.

Corfu is one of the most popular islands in Greece. It remains one of the Best Greek islands for history that goes back thousands of years. The main historic focal point of the island is Corfu Old Town. The town is a UNESCO World Heritage Site and dates back to the 8th century BC. Furthermore, the Venetians designed much of the Old Town, including the three forts used to protect the Republic of Venice’s trading interests from enemies. The Old Town has continued to look stunning today and is a must-see in Corfu.

The Achilleion Palace in Corfu is in the beautiful small village of Gastouri. Locals built the palace in 1890 to accommodate Elizabeth, the former Empress of Austria. Unfortunately, she was assassinated in 1898, and the palace remained deserted until Kaiser Wilhelm II of Germany decided to purchase the building.

Kos is a fantastic island with so much incredible history that it is one of the best Ancient Greek islands. Visitors love to visit Kos’s Asclepion, an ancient medical center from many centuries ago. The locals built the medical center to honor Asclepios, the god of health and medicine. The ruins are on top of a hill, so you’ll get excellent views from the site.

Another excellent historic focal point is the Ancient Agora of Kos. It was an important area with several temples, houses, and baths that belong to several different periods. Archaeologists believe the ruins date back to the 3rd century BC, but the Romans restored them hundreds of years later.

You should also visit the Casa Romana, a Roman house that dates back to the 3rd century AD. Visitors love exploring the beautiful mansion and the mesmerizing architecture that dominated the island at the time. It has 36 rooms and three atriums, so much to explore!