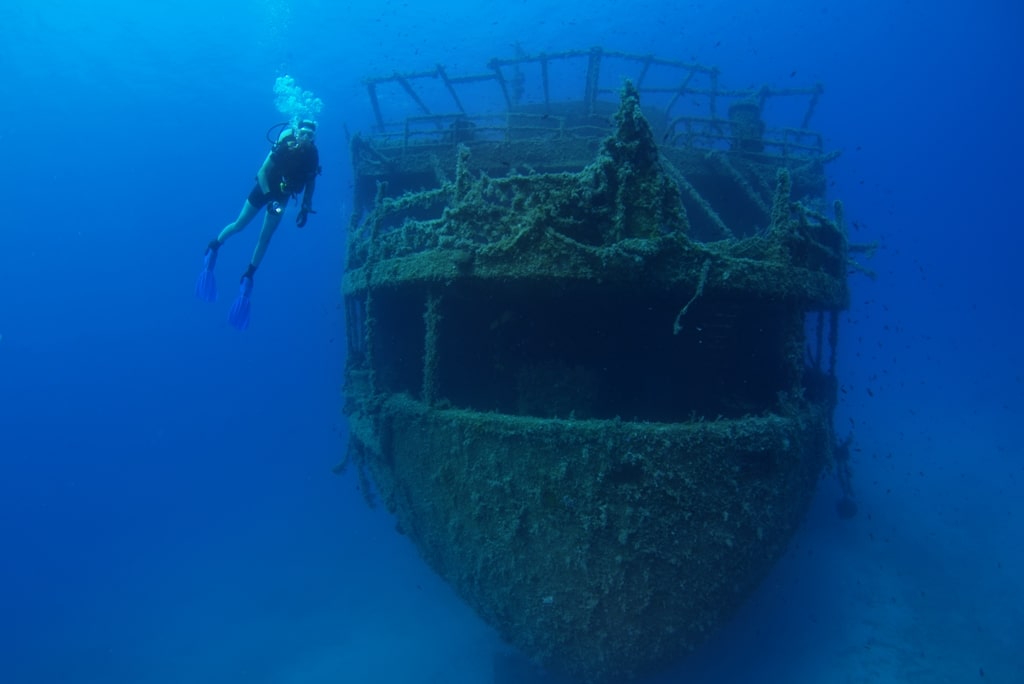 With the Aegean, Mediterranean, and Ionian Seas lapping against its shores, Greece is a water wonderland. There are almost 10,000 miles of coastline in Greece, so there’s a lot of choices when it comes to water sports. Two of the most popular are snorkeling and scuba diving. You can see anything from turtles to fish, and explore ancient shipwrecks and submarines which patrolled the waters off Greece in less peaceful times.

Let’s take a look at ten islands where you can snorkel and scuba dive in Greece. With a few tips on the best spots and diving attractions, it’ll help you to plan out your next vacation. Ready to dive in? Let’s go!

10 Places to Snorkel and Scuba Dive in Greece

Let’s start with Zante – also known as Zakynthos in Greek. The southernmost beach on the island, Gerakas Beach is a protected nesting site for loggerhead turtles. It’s a popular spot for snorkeling and swimming, and you may even get up close and personal with these beautiful creatures offshore.

The mating season for turtles is between April and June, and hatchlings usually hatch around 60 days after they’re laid. Even if you’re not snorkelling or diving, you may be lucky enough to see turtles hatch on the beach!

Zante has several other diving spots, and even has an underwater island park. Barracuda and Octopus Reef on the Keri Peninsula, the Keri Caves, and the Arch of Triumph are all excellent places to dive in here.

If you’re looking for the best Greek islands for snorkelling and diving, there’s nowhere better than Crete. There are so many spots where you can snorkel and dive including Elounda and Skinaria beaches, both of which have dive schools where you can take your first steps into the water.

Chrissi Island, off the southeast coast of Crete, has shallow and warm waters which are home to octopuses, parrotfish, and much more. Prefer to dive? Even amateurs can enjoy Elephant Cave in Chania, which gets its name from the fossilized elephant bones preserved here.

Another of the island’s biggest highlights is the WWII shipwreck at Falasarna. As it’s so close to the surface of Falasarna Bay’s clear waters, you can explore equipped with nothing more than a snorkel. Yes, whether diving or snorkeling in Greece, you’re sure to love Crete.

This island is not only about meandering around the narrow lanes that connect the whitewashed houses and blue domed churches or enjoying the sunset. You can actually dive in Santorini’s caldera! Incredibly, this volcano is still active, yet you can explore it with your flippers and oxygen tank.

Nea Kameni is probably the most popular spot for diving in Santorini, and for good reason. It’s where you’ll find the wreck of the Santa Maria ship, a passenger vessel that sunk in 1975.

In the deepest parts of the volcano itself, you’ll see colorful sponges living between the huge boulders, while Adiavatous Reef will delight those who love marine life. A popular spot with local and international divers alike, it’s famed for the diverse range of fish and crustaceans that call it home.

Alonissos was one of the first islands in the Aegean to be inhabited, but it’s escaped the mass tourism that the likes of Rhodes, Crete, and Santorini have enjoyed over the years.

However, Alonissos is not such a secret in the diving community as it has the largest Marine Park in Europe off its shores. Here, there are several dive sites where you can see monk seals, dolphins, and much, much more.

Sites such as Mourtias Reef and the Gorgonian Gardens unveil octopus, groupers, and moray eels peeking out from among the colorful corals. Some of the best sights are quite deep, so it’s a good idea to sign up for a diving course when arriving on the island.

One of the Cyclades, Folegandros is a small island between Naxos and Santorini. With five beautiful beaches on the island, it’s one of the best islands for snorkeling in Greece. You can snorkel here without any experience, but rather do it under the watchful eye of a PADI instructor who can take you to spots such as Georgitsi Cave and Katergo Beach.

The cave has colorful flowers, coral, and sponges under the water, while the cliffs at Katergo Beach promise a wealth of brightly-colored fish. If you have time left over, the nearby uninhabited island of Polyaigos boasts wonderful underwater sights too.

Naxos is one of the best Greek islands for diving thanks to one thing above all else – the Marianna Wreck. Traveling from the Port of Piraeus to the Red Sea in 1981, it unfortunately hit the treacherous Amaras Rocks between Naxos and Paros.

The rear of the 100-meter-long ship is even fully intact, meaning that advanced and open water divers can explore the ship’s cargo. Even less experienced divers can get close to the wreck from using a line. The Marianna truly is one of the most spectacular dive sites in all of Greece.

You can get the best of both worlds when it comes to Kefalonia, in terms of both snorkeling and diving. Just 15 minutes walk from the charming fishing village of Fiskardo on the northern tip of Kefalonia, the beach is home to one of the world’s most endangered marine mammals, the Mediterranean Monk Seal. That’s what the beach is named after!

For those who prefer to dive, Kefalonia offers another amazing shipwreck dive. HMS Perseus is a submarine that lies at a depth of 52 meters between Kefalonia and Zante. Though you can dive near the wreck, most divers don’t go inside out of respect for those who lost their lives when the sub sank.

For snorkeling Greek Islands, there are few better spots than Thassos. Or more specifically, Aliki Beach. The small but picturesque beach is crescent-shaped and backed onto by pine and olive trees, so it’s quite scenic above water too.

However, drop-down under its clear waters with your snorkel to enjoy Alliki’s true magic. Discover marine life including sea urchins, shells, and a whole host of fish!

Mykonos is up there with Santorini for the most popular island in the Cyclades. If you can’t separate them by what’s on land, you could always attempt to do so by sea. However, that’s complicated, as they both offer wreck diving!

Mykonos is arguably more interesting though – Anna II is a 62-meter-long cargo ship that sunk in 1995 off the southeast coast of the island. It’s at 25-meter-dip, so it’s quite accessible and divers can delight in brightly-colored sponges and friendly fish.

Chios, famous for its mastic trees on the land, is closer to mainland Turkey than Greece. In fact, it’s just seven kilometers away! It’s not the most famous destination on this list for diving, but it’s a good spot for beginners to gain more experience, while advanced divers will still feel the challenge of exploring Chios’s waters.

You can find dive centers in most of the towns on the island, and many will take you to the strait between Chios and the Oinousses Islands. Here you can spot marine life, admire rock formations, and explore small shipwrecks.