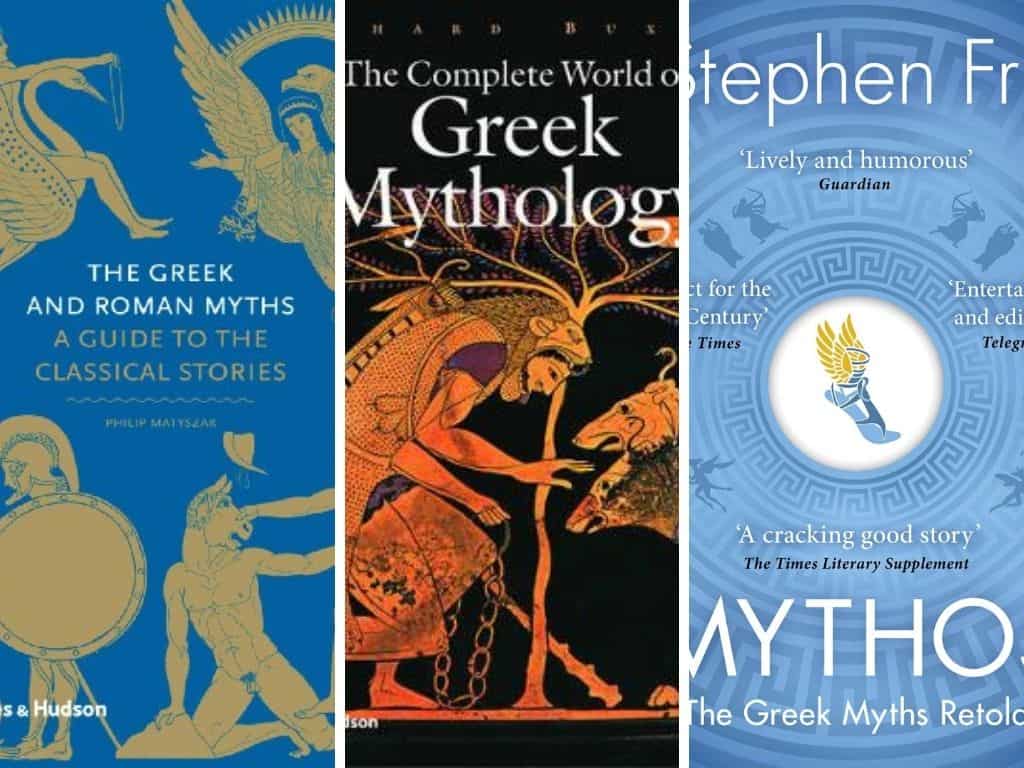 Mythology in general is one of the oldest ways of storytelling. Stories in the most ancient mythologies were crafted well before books were ever a thing and passed down from generation to generation through oral retellings. Even the earliest mythology books, therefore, are written accounts of stories that were being told for centuries before.

That’s the case with Greek mythology, one of the oldest mythologies in the world and the basis for a lot of western culture throughout the eons and even today, in current pop culture media and entertainment.

Greek mythology is full of temperamental gods with human vices, larger-than-life heroes that fight awe-inspiring monsters, and stories of great love, great rage, great betrayal, and great heroism. Because it is so vast, it can be found in several Greek mythology books. There are several different types of books about Greek mythology, categorizing them by god, by theme, or by the approximate era in which the Greek myths were created or first circulated.

Reading books on Greek myths is always fascinating. The tales are exciting and often the canon basis for many other, much more modern stories, that we enjoy today. Even superheroes have their basis in Greek and other mythologies. Beyond the tales, reading a good Greek mythology book will revive generations of an ancient people that yielded philosophy, democracy, and the theater to the western world.

It must be comprehensive, with as faithful translations as possible or at least faithful retellings that compel the reader to do further reading and research. It also has to be well written and easy to follow.

Based on these criteria, here are the best Greek mythology books that have either withstood the test of time or gained great acclaim for the stellar work within.

1. The Greek and Roman Myths: A Guide to the Classical Stories, by Phillip Matyszak

This Greek mythology book is one of the most comprehensive and well-organized when it comes to easing the reader into the complex and meandering myths of Ancient Greece and Rome.

The author also makes clear connections of these original myths to modern-day culture, in a fascinating tour through different eras of Western civilization, from the Renaissance to modern opera, cinema, and literature.

Phillip Matyszak’s book is a must-read for anyone wanting an efficient and clean yet exciting introduction to the fascinating world of Greek mythology.

If you are a fan of modern retellings, Stephen Fry’s book is the perfect gateway to Greek mythology.

He retells all the basic Greek myths in a modern, funny, emotional style that retains the original aesthetics and grand scale of the myths while also making them resonate with the modern reader.

3. Heroes: Mortals and Monsters, Quests and Adventures, by Stephen Fry

This second book on Greek myths by Stephen Fry is the must-have companion to his Mythos one, as it continues the excellent retelling with a focus on the tales of the Ancient Greek heroes.

In his distinct style of humor and emotion, Fry narrates the stories of scheming gods pursuing mortals, great heroic deeds against unimaginable monsters, and how hubris can bring down even the strongest hero.

Cowardice and bravery, cunning and gullibility, prowess and weakness all clash together through great adventures, riddles, battles, standoffs, and chases.

This amazing compilation was published in 1942. Ever since it has been lauded as the best Greek mythology book for adults.

In a concise tome of around 400 pages, Hamilton manages to present all the main Greek myths in beautiful, emotional, and fascinating prose.

Mythology is a wonderful introduction to Greek mythology that reads like classic literature and gives the reader a full account of all the main tales of gods, heroes, and great adventure.

5. The Complete World of Greek Mythology by Richard Buxton

Yet another great introductory book on Greek mythology for adults, Buxton’s review of the Ancient Greek myths and legends takes a step back from the literary allure to focus on more than just the story.

In Buxton’s book, there is a focus on context, both geographical and historical, which gives an additional dimension to the significance and scale of every tale he narrates.

There are also more than 300 illustrations that accompany the narrative, from landscapes where the tale is supposed to be taking place to pottery, artwork, and more, giving even more of that precious context that grounds the myths into the reader’s reality.

There are many translations, but the one by West is considered one of the best for his nuanced prose.

Theogony is a comprehensive compilation that was written by Hesiod in the late 8th century BC. Hesiod had made a monumental effort to compile all the existing myths and legends about the gods, the heroes, the mortals, and everything in between in one complete and cohesive narrative.

That’s why even today, his work is popular as inspiration and resource for modern retellings or myth-inspired literary works.

7. The Iliad by Homer, translated by Robert Fagles

Continuing with primary sources, one would be remiss to miss out on reading the Iliad, one of the two epic poems written by Homer, the ancient Greek poet.

Homer’s verses are intense, full of imagery and tension, and full of suspense even though he begins the tale by spoiling the ending.

Through Homer’s words, the reader is immersed not only in vicious and wild battle scenes, but tender scenes of love and powerful scenes of rage, friendship, grief, and beauty.

There have been many translations of the Iliad in English, but the one by Fagles is considered the mainstream and best gateway into the powerful epic.

8. The Odyssey by Homer, translated by Robert Fagles

The sequel to the Iliad, this epic poem is an account of the trials and tribulations of Odysseus, the king of Ithaca, who is trying to return home after the war ends victoriously for the Achaeans.

It is a powerful account of a trip that lasted 20 years, involved a lot of harrowing pursuits from Poseidon, the god of the sea, temptations and perilous passes, beautiful princesses, queens, and witches, and the masterful cunning that characterizes the hero Odysseus even to this day.

Robert Fagles brings it all into the English language in powerful imagery.

9. The Library of Greek Mythology by Apollodorus, translated by Robin Hard

Again the closest compilation we have to primary sources, this book comes to us from classical antiquity. It’s a full account of the main myths about the gods, the ancient Greek heroes, and the general creation of the world as the ancient Greeks saw it.

The translation by Robin Hard is beautiful and enthralling, perfect for accounting tales of great accomplishments and trials.

An amazing Greek mythology book, as well as a compilation of all the classic ancient Greek dramas, is a wonderful way to immerse oneself into the world of gods, heroes, and human vices.

These awe-inspiring plays have been the biggest legacy of modern theater and opera, and everyone seeking to find these roots should read them.

The powerful and highly artistic translation helps preserve the grandeur and impact of each of those tales, from Agamemnon to Antigone and Oedipus Rex.

This remarkable compilation approaches Greek mythology in a novel manner, focusing on one mythological character at a time. Each character is then connected and categorized in a cohesive, easy-to-follow narrative that can serve as a gateway and roadmap for the meandering world of Greek myths and legends, including pathos, high emotions, and powerful themes. The book comes with beautiful illustrations, famous reprints of paintings, and photos of statues and reliefs depicting what is being narrated.

Ovid was a Roman poet and writer who used ancient Greek myths and legends to further his own ideas, political messages, and emotional situation. Many of Ovid’s retellings have become the canon account of several legends and myths.

Martin’s translation is lively and faithful, giving the reader the main feel and taste of Ovid’s prose. The book comes with a glossary and endnotes to further support the reader during their forays into this fascinating, ancient mythical world.

Animals of the Greek Gods