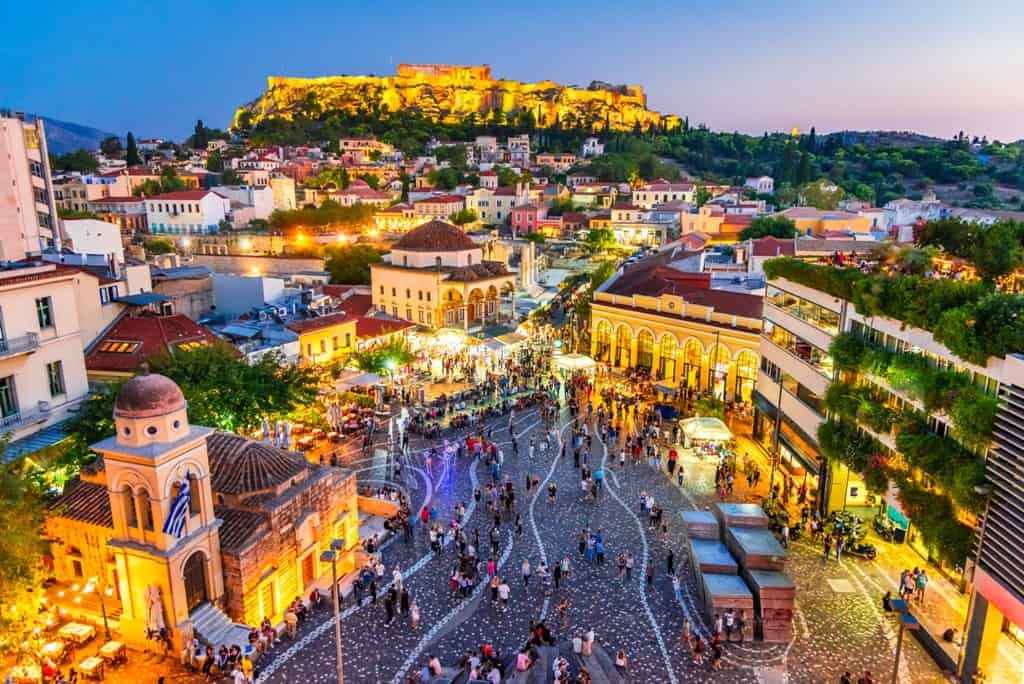 Athens is a beautiful and much-visited city and everyone wants to take great photographs of its iconic monuments, as well as the best views of Athens that perfectly capture the atmosphere of this very special city.

Athens enjoys good weather for most of the year, but does get extremely hot and busy in the summer months. If you are visiting Athens in April- May or September – November, the temperatures are perfect for walking around to get the best photos and the city is definitely not as busy. In April and November there is the added bonus of the gorgeous smell of citrus blossom and in the winter months the glistening skins of oranges on the dark-leaved trees add a lovely splash of colour to many of your photographs.

To save you valuable time, we have compiled a list of places where you can enjoy the best views of Athens.

Where to Enjoy the Best Views of Athens

Views of the Acropolis are instantly recognizable and this is the first place that most visitors visit when they arrive in Athens. The Acropolis is an ancient citadel perched on dramatic limestone crags overlooking the city and it comprises of ruins of a number of remarkable temples, with the Parthenon being the most famous. It is well worth getting to the Acropolis early to beat the crowds.

Rather than trying to take grand views of the Acropolis, it is far better to take detailed studies of certain pieces of architecture such as the well-preserved columns of the Temple of Athena Nike, the six columns of the Porch of Caryatids which are sculptures of women and the sacred olive tree by the small temple of the Pandroseion, presented to the city as an olive seed by Athena.

In later years, when the tree was badly burnt, it sprouted a new shoot and became the symbol of the city’s survival. If you are planning to get some great the best views of the Acropolis, these are obtained from other locations in the city.

The Acropolis gives visitors a breathtaking 360° view of the city which is perfect for capturing many other landmarks. To the north, there are the ruins of the Ancient Agora and to the north-east, you will see the very distinctive tree-covered Lycabettus Hill which is the highest point in the city. To the south-east, there are great views of the Theatre of Dionysus, the Acropolis Museum and the Temple of Olympian Zeus.

On the southern side of the Acropolis stands the Odeon of Herodes Atticus – a theatre with dramatic archways as the stage backdrop and tiers of curved seating for 5,000 people. In the distance, you will see Filoppapapos Hill and its monument.

It is easy to forget that Athens lies so close to the sea, but there are lovely views of the Aegean and the bustling port of Piraeus. If you are hoping to capture the best sunset views of Athens, climbing up to the Acropolis in the evening (before the site closes) is well worth doing.

You might want to check out: A guide to visiting the Acropolis.

For great views over the whole of Athens, a good location is Lycabettus Hill, which at 277 metres, is one of the highest points in the city. There is a paved footpath that snakes its way to the top, or if you prefer, you can hop on the cable car. The big disappointment about the cable car is that it climbs up the inside of the hill so there are not great views to enjoy! The walk up to the top takes 15-20 minutes, and once you are there – wow!

All of Athens is spread out in front of you, so you can get a feel for its true size. In the heart of the city standing on its huge rocky limestone outcrop is the Acropolis. Looking in the other direction you are rewarded with views of the Aegean.

There is a good restaurant called Orizontes on the top of Lycabettus which is the ideal way to enjoy a leisurely drink or meal as you wait for the sunset, so you can capture the best sunset views of Athens – but be warned, there will be many people with the same idea! It is best to get there about an hour before sunset and to head for the small white chapel as this is definitely the very best spot!

Situated about 15 minutes walk from the main entrance to the Acropolis, is the start of the footpath up Filoppapos Hill. The hill has spectacular views across to the Acropolis and the classic spot for photographers is standing in front of the monument of Filoppapos. There are numerous walking tracks that criss-cross over and around the hill and they all give slightly different views of the Acropolis and of the azure Aegean.

Many people climb Filoppapos either at sunrise or sunset as the views of the Acropolis are magical. The early morning light reflects beautifully off all the limestone and there is the best sunset view of the Acropolis when the stone of the different temples takes a rosy hue.

This is the third of Athens’ hills and is the place where learned men used to gather in ancient times to discuss and debate. Pnyx Hill enjoys wonderful views of the Acropolis and Lycabettus Hill.

The National Observatory stands very close to Filoppapos Hill and Pnyx Hill and has a number of good viewpoints for photographs of the Acropolis. One of the best points is just a short distance from the Doridis equatorial refactor, which is situated in a separate building, along a path leading to the right, before you reach the National Observatory

Lying close to the entrance to the Acropolis, Areopagus Hill offers excellent views of the Acropolis. Also known as ‘Mars Hill’, the hill is linked with Ares, the god of war, as according to mythology, it was in the court held on the hilltop that Ares was tried for the murder of Poseidon’s son, Alirrothios.

As well as fantastic views of the Acropolis, you will be able to get some good photographs of the Ancient Agora and Temple of Hephaestus.

Enjoy stunning evening views of the floodlit Ancient Acropolis from the Galaxy Bar and Restaurant at the Athens Hilton. This sophisticated rooftop terrace offers 360º views over much of the city (including the Acropolis and Lycabettus Hill) all spread out in front of you under the starry night sky – how magical is that!

This is a popular place because of its amazing views, so get there is good time to enjoy the spectacular panorama over one of the signature cocktails or a delicious meal from the restaurant’s Mediterranean menu, prepared by the chefs in the open kitchen.

A for Athens Rooftop Bar

For truly amazing views that can be combined with drinks or dinner, head for A for Athens. This hotel has a rooftop terrace with a restaurant immediately below and both levels offer stunning views over the popular Monastiraki Square, with the city behind and the Acropolis standing high on its crags.

Interested in more nice views of Athens? Check out my post about the best rooftop bars in the city.

The Acropolis Museum is rich in exhibits that tell the 2,500-year-old story of the ancient city. On the second floor of the museum is its restaurant which has breathtaking views of the Acropolis. You can enjoy a delicious Greek breakfast there through until noon, or a leisurely lunch.

The restaurant serves tasty traditional Greek dishes and in the evening its ambience is transformed by the magical vista of the floodlit crags of the Acropolis and its temples and other monuments.

The best sunset views of Athens

The Acropolis is one of the most photographed places in the world and many visitors to the city are keen to get the best sunset views of Athens. Wear flat comfortable shoes for all the photo locations we suggest and if the ground is uneven, it is wise to have a torch too.

Lycabettus Hill is the most popular location for taking sunset shots, but many visitors like to find other locations to capture the magic of the city. The National Observatory offers spectacular views of the sunset but is not so popular as Lycabettus, but nevertheless, it is still worth getting there 30 minutes before sunset.

Areopagus lies just below the Acropolis and is much loved by local people, both during the day and at night. Simply climb the staircase and hope there is space for you! It is very special to get there before sunset and watch the floodlights being turned on in front of the cliffs of the Acropolis and its temples and other ancient monuments being bathed in golden floodlight.

For a more unusual perspective of the Acropolis, Ardettos Hill lies to the south-east and adjoins the Panathenaic Stadium. A paved pathway leads up the hill and you are rewarded with a beautiful view of the Temple of Olympia Zeus in the foreground, with the Acropolis behind.

As well as capturing a glorious sunset shot of the Acropolis on Pnyx Hill, it is also ‘the’ place where people ‘in the know’ gather to take photographs of the Acropolis bathed in the light of the full moon.

Another memorable sunset can be enjoyed if you join one of the excursions out to the Temple of Poseidon in Sounio. This magnificent Doric style marble temple was built in 440BC and stands in ruins high on a clifftop overlooking the Aegean.

Thirteen of the temple’s columns are still standing as a testament to its grandeur and its location is perfect as it was dedicated to Poseidon, the god of the sea. Watching the sun begin to set over the Aegean is spectacular and the photographs that you take standing on the clifftop will become your treasured masterpieces…