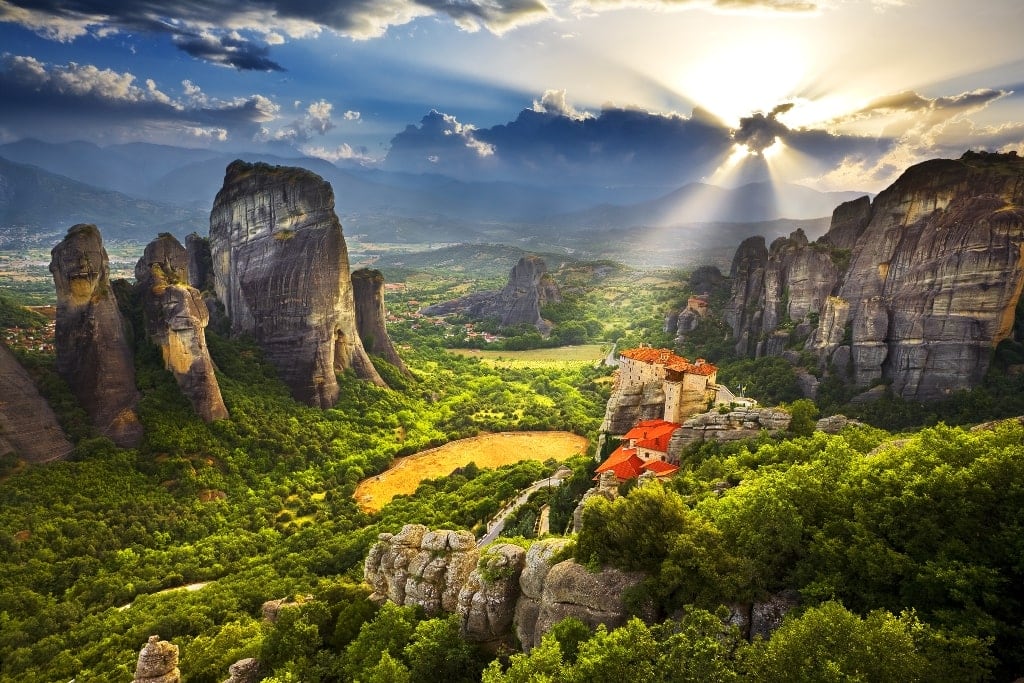 From blue-domed churches looking out over the collapsed caldera of a volcano to monasteries perched atop impossible cliffs, Greece has some of the most evocative landscapes in the world. Across its chunk of land on the Balkan Peninsula and its more than 6,000 islands, there’s a lot of variation too. You can be wandering through olive groves one day while chilling on a white sand beach the next day.

In this post, we’ll introduce you to a mixture of the most breathtaking landscapes in Greece – both natural and man-made. Let’s jump right in!

Santorini, one of the Cyclades islands, is arguably the jewel in Greece’s crown. More than 3,500 years ago, one of the largest volcanic explosions ever to occur took place here, submerging much of the caldera. The island is now the perfect blend of natural and man-made beauty, nowhere clearer than the town of Oia (pronounced Ia). Blue domed churches and whitewashed houses line the slopes of the still-active volcano, which last erupted in 1950.

If you can only do one thing in Oia, be sure to watch the sunset. The hillside just outside of the village is a great place to enjoy it without the crowds. Oia is one of four towns on Santorini – the others being Thira, which is a little larger than Oia and has a lot of hotels and restaurants, Imerovigli and Firostefani.

Located in the Kalampaka region on Greece’s mainland, the UNESCO World Heritage Site of Meteora has to be seen to be believed. Meaning ‘suspended in air’, Meteora refers to a set of 24 monasteries, six of which are still active today, which perch perilously atop sandstone pinnacles that were formed 11 million years ago.

When the monasteries were first constructed, monks were hoisted up in baskets using ropes. Nowadays, if you’re visiting, you’ll be pleased to know that there are stairs and footpaths! In addition to the beautiful landscapes, Meteora is an outdoor lovers’ paradise. As well as hiking trails, you can make the most of scrambling and rock climbing. History buffs will be at home too – there are caves that date back to Neanderthal times in the area!

To Greece’s northwest for the next stunning landscape. The Vikos-Aoos National Park was established in 1973 and is home to Mount Tymfi, the Aoos River, and rare flora and fauna such as foxes and bears. The standout attraction of the natural park is Vikos Gorge.

Deep in the Epirus mountains, it’s the second deepest gorge in the world after the Grand Canyon. The gorge’s walls flank the Voidomatis River, and at some points, they’re as high as 1,040 meters.

Hikes in the area take in not only the Vikos Gorge, but stone bridges, Byzantine monasteries, and postcard-perfect villages of Zagoria. It’s recommended to take guided tours and hikes, as it’s very easy to get lost in Vikos Gorge and that can be dangerous.

Visible from just about everywhere in Athens, the Acropolis is the most prevalent symbol of Ancient Greece. Dating back to the 5th century BC, it stands proudly on Acropolis Hill and looks particularly spectacular when lit by the moon.

One of the most beautiful spots to view the Acropolis is Philopappou Hill, a favorite walking spot for locals. The park and garden are just outside of Athens’ Thissio District and lays the center out right in front of you. Philopappou Hill is not only a wonderful viewing spot for the Acropolis but a worthy place to visit in its own right. It’s home to the Dora Stratou Theatre, National Observatory, and Agia Marina Church.

One of the most Instagrammed beaches in the world, Navagio Beach is on the island of Zante. It’s also known as Smuggler’s Cove and Shipwreck Beach due to the large boat, the Panagiotis, which washed up in the early 1980s. It had been carrying a cargo of illegal cigarettes and alcohol. The ship, which is slowly falling to pieces, is surrounded by pristine white sands and towering cliffs, which drop into the clear azure water.

Navagio Beach can only be reached by water taxi, or as part of a tour or cruise. If possible, visit early in the morning as this place gets very busy later in the day. What else would you expect from a beach named the best in the world in 2018?

Said to be one of the best swimming beaches in Greece, Balos is a lagoon 60km northwest of Chania Town on the island of Crete. Travel here, and you could be forgiven for thinking that you’ve stepped onto a stretch of sand in the Caribbean! Balos is popular but has retained its beauty and doesn’t feel overrun with tourists.

If swimming isn’t your thing, you can also come here to visit the nearby islet of Gravmoussa, where a Venetian Castle still stands today.

Athens isn’t the only place in Greece where you can take in views of an astounding acropolis that still stands today. Another is Lindos on the island of Rhodes. The ancient city is on the east of the island, with the castle sitting atop the hill looking down over the whitewashed houses of Lindos village.

If visiting the Acropolis and the charming town of Lindos isn’t enough, it also looks out over St Paul’s Bay. From the acropolis, it’s said to resemble the shape of a heart – so it’s a popular spot for honeymooners and couples. There’s even a small church which hosts a lot of weddings.

Single travelers. don’t let that put you off. The bay is a wonderful place to swim and soak up the sun too.

Our second trip to the Epirus Mountains on this list (after Vikos Gorge) is Drakolimni. Legend has it that the lakes of Drakolimni were home to two enemy dragons who threw rocks and pines at each other when fighting, creating the stupendous landscape that you can see now.

The alpine lakes are surrounded by green pastures between Mount Tymfi and Mount Smolikas. If you can visit in Winter, this is a great time to really appreciate the magic and mystery of Drakolimni

The last beach on our list, Sarakiniko is on Milos, and it is rightly regarded as one of the most beautiful in the whole of Greece. It’s actually the most photographed spot on Milos island! The bright white landscape is made from volcanic rocks that have been eroded over time and offer a stark contrast to the turquoise blue sea.

Not only can you swim at Sarakiniko beach, but you can also cliff dive, explore tunnels through the sea stacks and cliffs, and get close to a shipwreck. The beach is the busiest in the high season, and it’s best to visit outside of peak hours.

Perched on a hilltop, there is no-one left in Vathia to overlook its spectacular surroundings of the Mani Peninsula and the Mediterranean Sea. The ghost village (don’t confuse it with the nearby village of the same name) is a labyrinth of fortified houses, war towers, and 19th-century buildings. Wandering its cobblestone streets to imagine days gone by, or take a hike in the hills of the Mani Peninsula, which are especially beautiful during the spring and summer months.