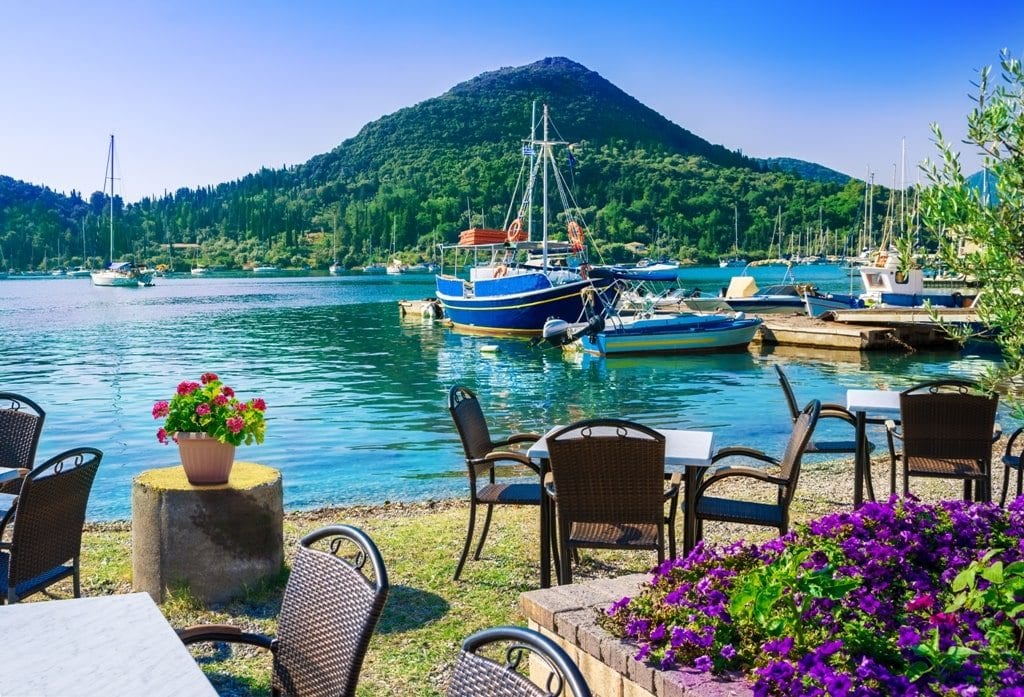 Greece is one of the most popular countries to visit in Europe thanks to its rich history, lively culture, and countless gorgeous natural sites. Another reason for its popularity is that Greece is quite cheap. Compared with other European countries, you can save yourself a pretty penny if you travel here, even during the high season.

However, that’s if you know where to travel. Popular destinations such as Santorini, Athens, and Hydra aren’t the easiest places to make your money go further. However, it’s not hard to find cheaper Greek islands.

In this post, we’ll take a look at 10 of the cheapest Greek islands to visit. If you’re on a budget, staying on a cheaper island will help make a Greek holiday more manageable.

Best Greek Islands to Visit on a Budget

Andros is the northernmost of the Cyclades Islands, a group which includes Mykonos and Santorini. However, despite being a popular spot for Europeans with summer homes, Andros has not yet experienced the mass tourism that its neighbours have. And it’s all the better for it!

Thanks to its relative peace and quiet, food and accommodation prices on Andros won’t break the bank.

Check out: A Guide to Andros island, Greece.

Aegina is one of the Saronic Islands in the Gulf of the same name. It’s even closer than Andros to the capital, you can get here in less than an hour from Piraeus port. That means it’s a wonderful day trip from Athens.

There’s no shortage of things to do either, with the Doric Temple of Athena Aphaia a popular landmark, as well as pretty villages, such as Souvala, Vagia, and Perdika.

Want to chill out at the beach? Head for the sandy stretch at Marathon.

The largest of the Cyclades, Naxos is home to some of the best beaches in the island chain and there’s a wide range of things to see and do. Despite that, it’s far cheaper than Mykonos or Santorini!

For beach bums, head to the west coast, where there are miles and miles of sandy beaches, as well as some stunning swimming and snorkelling spots.

Adventurous travellers should head for the island’s interior. The highest peak in the Cyclades, Mount Zeus, stands 1,004 metres above sea level and makes for a challenging yet fun hike.

Stopping off at mountain villages during your hike will introduce you to homemade wine, cheese, and kitron liqueur.

Check out: A Guide to Naxos island.

Crete is the largest island in Greece and one of the most popular to visit. You may think it odd that it appears on a budget travel list, but with a little bit of know-how, you can make your money go far here.

The main towns on the island have hostels, which will save you a lot of money on accommodation. You can also find a whole host of street food options when searching for food.

Travelling around Crete is easy and cheap too, with buses connecting the main towns costing less than €2 per trip.

Last of all, Crete has a wealth of attractions where you can spend the entire day. Balos Beach, Samaria Gorge, and the Palace of Knossos all have entry fees below €10. And they’re stunning!

Check out: Best things to do in Crete.

A hidden gem in the Aegean Sea, Thassos is just over an hour (13.9km) from mainland Greece, and you can easily get here from the port at Keramoti.

The most northerly Greek island, Thassos gets a lot more rain than others in the Aegean Sea, meaning that it’s very green. Despite more rain, you can still make the most of sun-soaked beaches across the island, especially in summer.

There are a couple of exciting historical sites to check out too, including an ancient Agora in Limenas and an archaeological site at Alyki.

Check out: A Guide to Thassos island.

Located between Lesvos and Thassos, Lemnos is another beautiful island in the northeastern Aegean Sea.

The island capital Myrina is overlooked by a stunning Byzantine Castle, which gives superb views of the city stretched out between two bays. Other notable sites include the cave church of Panagia Kakaviotissa and the ancient site of Hephaestus.

One of the reasons that Lemnos is such a well-kept secret is its distance from Athens. Even in peak season, you can find a spot on its beaches all to yourself. This also means low prices, making your money go further!

Did you know you can drive onto Lefkada? The island in the Ionian Sea is connected to the Greek mainland as it’s so close. You can even take a bus here from Athens!

Lefkada is one of the most popular low budget destinations in the country and attracts a load of Greek visitors, as well as international travellers in the know.

The laid-back island boasts several beautiful beaches and the Ionian cuisine will put a smile on your face. Adventurous travellers should seek out the Dimosari Waterfalls or watch the sunset behind the lighthouse on Cape Lefkatas.

Check out: A Guide to Lefkada island, Greece.

The largest and most historically important of the Dodecanese Islands, Rhodes is a popular destination for package travellers.

Like Crete, you may be surprised to see it on a list of cheap Greek islands to visit, but it’s inexpensive to get around, eat, and stay here; three top things that can eat into your holiday budget.

Be sure to check out the old city of Rhodes (a UNESCO World Heritage site), the Acropolis of Lindos, and go hiking to Seven Springs to get some natural shade away from the midday Aegean sun!

Check out: A Guide to Rhodes Island.

Though a party island, Ios can offer you some peace and tranquillity. As long as you keep your distance from its nightclubs in Chora and Mylopotas Beach.

Another of the Cyclades Islands, Ios bobs pleasantly in the blue waters of the Aegean Sea. Chora is quite nice to visit during the day, but there’s more to the island than its capital.

Hikes don’t cost a thing, and there are some awesome treks through the island’s backcountry. These include shepherd paths up to the island’s highest peak, Pyrgos. Just be sure to take plenty of water!

When it comes to accommodation, sites such as Far Out Camping will save you cash on staying in a hotel or an Airbnb.

Check out: A Guide to Ios island.

Our final cheap island in Greece is Zante, also known as Zakynthos. Another island that’s popular for parties and nightlife, it is possible to escape the tourist crowds and the higher prices around the most popular clubs and bars.

There’s no shortage of things to do in Zante. While you’ll want to tick Navagio Beach and its shipwreck off your bucket list, check out less touristy beaches, such as Alykes and Tsilivi.

There are museums too which provide not only a cheap morning or afternoon but a chance to escape the sun!

Check out: A Guide to Zante island.

Tips for Visiting the Greek Islands on a Budget

One of the most important considerations when visiting Greek islands on a budget is the month you travel. Travelling in May/June or September/October means not only do you avoid some of the crowds but the hottest temperatures too. It can be so hot in July and August that you spend most of your time ducking out of the sun.

Greece has more than 6,000 islands. Make sure to check out the map before you travel and pick out some which are in the same island group – some of the most popular include the Sporades, Cyclades, and the Dodecanese.

Speed ferries are the most expensive option. If you’re not pushed for time, sit back, enjoy a slower (and cheaper) ferry and take in the stunning scenery of the Aegean, Ionian, and Mediterranean Seas!

Traveling on land? Opt for public transport, such as buses and trains, over car rentals and taxis. Scooter rental is a fun and cheap way to explore smaller Greek islands.

Eating out at restaurants is a great way to experience Greek food. However, doing so every meal will leave a big hole in your budget. You can enjoy traditional Greek food, such as souvlaki, at street food kiosks, as well as pies and sandwiches at bakeries instead.

Some islands are popular package holiday destinations, such as Zante, Crete, and Rhodes. They’re not always the best way to immerse yourself in Greek culture, but they’re good value!