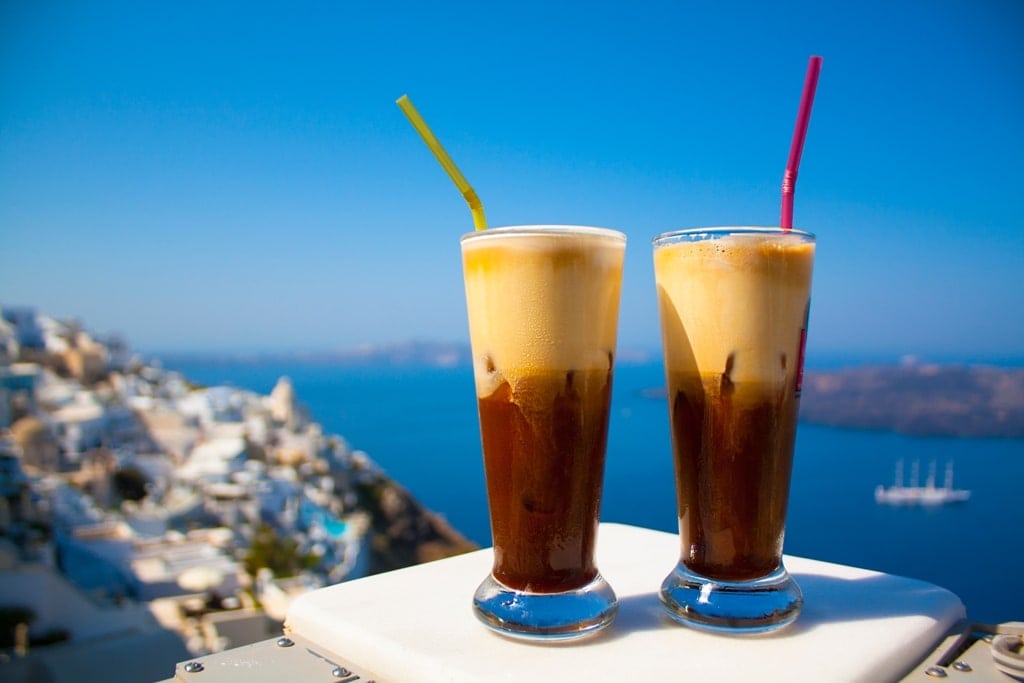 Greece runs on coffee. The coffee culture in Greece plays a major role in public society as people have been gathering in coffee shops for decades. At first, coffee shops were places where men would meet to talk politics and current affairs but with the passage of time, they became small havens of relaxation and conversation with friends.

All the way from the traditional Greek ibrik coffee to the iconic Freddo and today’s modern coffee shops, the Greeks have embraced coffee in many forms. Tradition and modernity come together as the coffee culture in Greece looks forward but with lessons from the past.

Let’s find out about the coffee culture in Greece, and what kind of coffees the Greeks enjoy most!

Arrival of Coffee in Greece

Coffee arrived in Greece during the Turkish occupation. Ottomans were big fans of coffee and so there were many cafes in occupied Greece, but unfortunately, Greeks were not allowed to enter them. After the country’s independence around 1830, the first Greek coffee shops started to open.

Back then, the only method known for brewing coffee was by using the ibrik, a small pot. What’s more, coffee beans were bought raw so the coffee shop owners had to roast them and then grind them in order to prepare the coffee. To do this, they were using various pots, pans, and whatever else they had at their disposal, as using large batch coffee roasters was not possible yet.

At the beginning of the 20th century, the Loumidis brothers worked in a coffee mill of the time. A few years later, in 1919 they opened their own coffee mill in Athens and slowly began to sell ready-made packaged coffee.

At first, the people were reluctant to buy a ready-made product, as for that time it was not something that was common and the product packaging was of dubious quality.

In time, however, it won people over and Loumidis is to this day the most popular ibrik coffee brand. For decades to follow, ibrik coffee entered every Greek household and earned a spot in people’s hearts.

It’s worth noting that, up until the mid-1950s Greeks would call ibrik coffee “Turkish coffee” but due to the strained relations between the two countries, Greeks started calling it “Greek coffee”.

Today, it is still known as Greek coffee and despite the arrival of other coffee preparation methods, it remains a favorite amongst Greeks.

Types of Coffee in Greece

The ibrik is probably the oldest coffee brewing method in the world, as the idea is very simple: just mix coffee grounds with water and bring to a boil. That’s exactly what the Greeks did when they started making ellinikόs (Greek coffee).

The coffee powder, water, and sugar (optional) are mixed together in the ibrik over low heat. When the mixture begins to rise, but before it begins to bubble or overflow, the ibrik is removed from the heat. The thick, aromatic liquid is then served in a demitasse cup, accompanied by a tall glass of cold water and usually a small delicacy.

The size and color may be similar to espresso, but that’s where the similarities end. Greek coffee should be drunk at a leisurely pace, not in one go, as there is a thick residue on the bottom of the cup.

There are also two ways one can heat ellinikόs coffee. The first and most common one is by placing it on a stovetop or a micro-burner and the second one is by sinking the bottom of it in hot sand. Some coffee professionals claim that by using hot sand there is better control over the heat around the ibrik and not just the bottom of it.

In general, It is not common to grind ellinikόs coffee at home, because it needs to have a dusty, flower-like consistency which is difficult to achieve with the standard electric coffee grinder. This is why everyone buys their Greek coffee directly from the supermarket or specialized coffee shops.

However, if you want sugar, you have to let the barista know upon ordering. Greek coffee dosage is usually measured in teaspoons:

You can also ask for your coffee to be served a little heavier, which means adding two teaspoons of coffee or less water.

Another popular tradition of ellinikόs coffee for Greeks is the fortune-telling method of tasseography. During this ritual, one’s fortune is interpreted by reading the pattern of the coffee grounds.

Once the person drinks their coffee, they flip the cup on the saucer and wait for a while until the residue takes form. The fortune-teller then interprets the forms on the cup as a way of relating to the drinker’s life and future. Although this is not as common anymore, it is still a part of Greek coffee culture today.

At some point during the late 1950s, ellinikόs finally got some competition. Just a decade earlier, during World War II, instant soluble coffee had been manufactured for ease of use by American soldiers. Nestlé was quick to recognize a business opportunity in instant coffee and quickly entered the market with its own product.

In 1957, during the International Trade Fair in Thessaloniki, Greece’s second-largest city, one of  Nestlé’s exhibitors could not find hot water to brew his instant coffee so he decided to mix it with cold water in a shaker, sort of like a cocktail.

It was an instant success! Soon Nestlé’s coffee brand, Nescafé, developed a recipe and began selling its own frappé. The word itself is French and describes a drink served chilled or with ice cubes.  Frappé became a huge part of Greek coffee culture and was particularly enjoyed during the hot summer months.

Making a frappé coffee is actually quite simple due to the use of instant coffee. All you need to do is add coffee, sugar (optional), and room temperature water in a tall glass. Then you mix it with a small hand mixer, add a few ice cubes and whole milk or condensed milk if you prefer. Finally, you top it up with some cold water and voilà!

Frappé remained a top preference for Greeks for a few decades up until freddo coffee made its appearance.

Despite their own tradition in coffee, the Greeks were quick to recognize the value of espresso. You might be surprised to find out that the first espresso machine was invented at the beginning of the 20th century! However, it took a good few decades before the Italians could market their invention properly.

In Greece, espresso was well-known but it was not a preferred option as everyone still loved drinking ellinikόs when it came to hot coffee. And although espresso arrived in Greece in the 1960s, Freddo wasn’t actually invented until the early 2000s.

In a country with hot summer months, it was only a matter of time before coffee companies started experimenting with cold versions of the traditional espresso. Inspired by the frappé preparation and with the use of new powerful coffee mixers, the Freddo coffees were born.

Freddo is the Italian word for ‘cold’ and there are actually two popular Freddo drinks in Greece:

Freddo Espresso is made by adding a single or a double shot of espresso, sugar (optional), and ice cubes in a coffee shaker and mixing it with the use of a powerful coffee mixer.

Freddo Cappuccino is made similarly, only with the addition of frothed milk on top. Despite the fact that these drinks are cold, you will soon see that Greek people drink them all year round!

Today, coffee in Greece has a history of quite a few centuries and the Greeks have managed to keep the tradition alive while embracing new modern ways of preparing and drinking coffee.

If you ever find yourself in Greece, you will encounter many modern coffee shops offering different variations of espresso drinks, as well as the famous Freddo and frappé options.

Third-wave shops will surprise you with their choices of different coffee origins and blends while modern artisanal roasteries will make it difficult for you to choose which coffee beans to buy.

However, in Greece you will also find traditional coffee shops, serving Greek coffee and preserving the aroma and the feeling of an era long gone. Greek coffee keeps that era alive and with it everything the Greeks have learned from their past.

So, let the traditional coffee shops take you back a few centuries while you explore the country, and then let modern cafés show you how coffee in Greece has evolved from generation to generation.