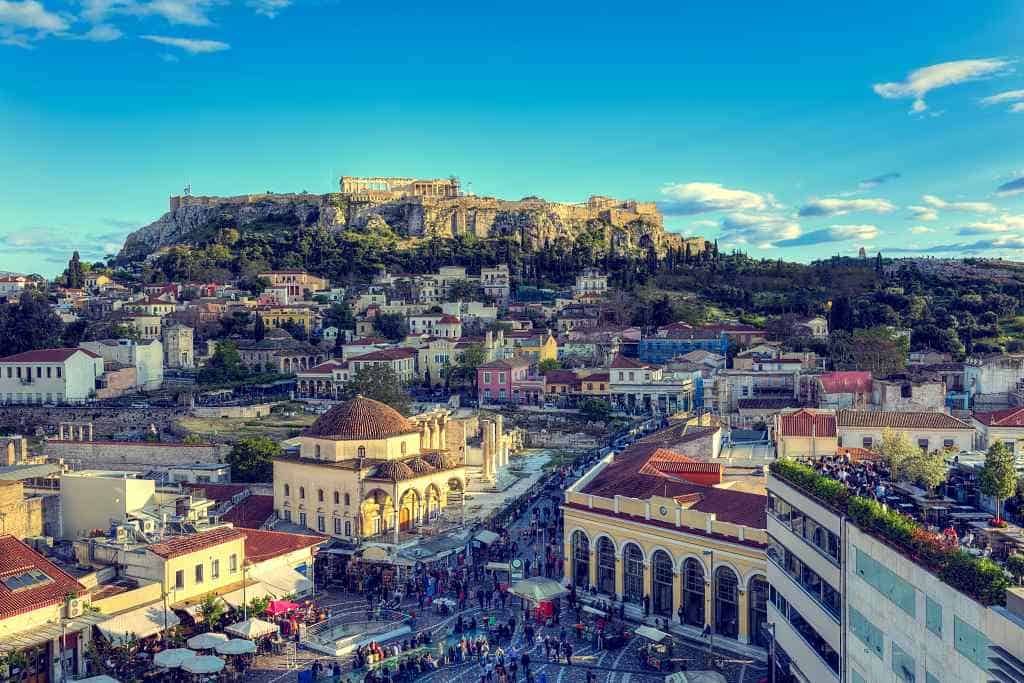 Monastiraki meaning ‘Small Monastery’ is a bustling neighborhood in the heart of Athens, well known and loved for its wealth of iconic ancient (and more modern) landmarks, shops, and traditional tavernas. With everything within easy reach on foot and the Parthenon high on the hill behind, you really can’t say you’ve seen Athens without exploring marvelous Monastiraki!

A Guide to the Monastiraki area of Athens

Things to See and Do in Monastiraki

The square is the hub of the neighborhood with a fountain at its center surrounded by a metro station, Ottoman mosque, Orthodox church, and the entrance to the warren of streets that make up Monastiraki Flea Market. Brimming with people, both tourists and locals, at all times of the day and night, take a moment to just stand here and slowly look all around you – This is your gateway to exploring the mix of cultures which make up Greek civilization…

Otherwise known as the Metropolitan, this is the ‘official’ church of Athens and the headquarters of the archbishop of Greece. Finished in 1862, it’s the largest church in the city and its cream coloured neoclassical facade and opulently decorated incense-filled interior makes for an impressive sight.

Located directly behind the huge Cathedral of Athens is the tiny 12th-century temple church known affectionately as ‘The Little Metropolis’ aka the Church of Virgin Mary Gorgoepekoos and Saint Eleutherius. Considered one of the best ecclesiastical edifices of Athens, you can’t see the big Metropolis without also admiring the unique architecture of the little Metropolis!

This famous flea market is a warren of eclectic shops selling everything and anything from books, cd’s and records, clothes, furniture, antiques and painted icons, jewellery, leather goods, and cheap and cheerful souvenirs. During the week, it’s not truly a market, but come here on a Sunday morning (be sure to arrive before 11 am) and you’ll find locals selling their wares from tables along the street.

Standing proudly in one corner of Monastiraki Square, with the Acropolis high on the hill behind, is the iconic 18th century Ottoman mosque with its terracotta tiled roof. Built in 1759 by the one-time Ottoman ruler of Athens named Tzistarakis, the mosque is today used by the Folk Art museum as another exhibition space.

Built in 132 AD for Roman Emperor Hadrian, this building featured a typical Roman forum design with a pool in the middle of a courtyard bordered by 100 columns. Not only was it a library housing a vast papyrus collection belonging to Hadrian but also had reading rooms, lecture halls, and music rooms.

Not to be confused with the Ancient Agora, the rectangular Roman Agora is located East of the Ancient Agora and was used as an open-air market place from the 1st century BC, built using money from Julius Ceasar and Augustus. Later, in 267 AD after the invasion of Herulae, the Roman Agora became the administrative and commercial center of Athens.

8. Tower of the Winds

Built in the 2nd century BC, this was the world’s first meteorological station as well as being a timepiece. Look carefully at the carvings on the octagonal tower and you’ll see the 8 Greek gods of wind depicted as well as the markings for the sundial. Though used by the Folk Art museum for exhibitions, you can still see the original position of a water clock which marked time using water from a stream that flowed down from the Acropolis when you step inside the tower.

Tickets: Included in the ticket for the Roman Agora amd the Combined Ticket. check above for details.

The best-known example of an ancient Greek agora, it was here that Socrates and Plato walked, this being the centre for Athenian democracy. Two iconic buildings stand on the site today – The Temple of Hephaestus built in 415 BC (2 years before the Parthenon!) and the Stoa of Attalos, a reconstructed covered walkway.

Originally built in the 15th century and later rebuilt in the 17th century, this mosque is one of the most important buildings from the Ottoman period to exist in the city today. Saved from the ruin it is now a place for cultural exhibitions.

If you’re into music in any way, shape, or form this museum provides a welcome break from viewing artifacts! See how Greek musical instruments have evolved over the years with 600 instruments on display spanning 300 years inside the 3 floors of the historic Lassanis Mansion. You’ll have the chance to hear the wood planks that the priests on Mt Athos play at prayer time whilst in the Summer months, you can enjoy a musical performance in the garden.

Even if you’re moving around the city on foot and not using the metro, don’t walk by the Monastiraki Metro Station without popping into the archaeology site on the 2nd floor to see an 8th century BC excavated part of ancient Athens! The remains of buildings, including the amazing vaulted ceiling built over the Eridanos River built when Hadrian ruled, were only discovered when the metro station was being built back in 1992.

Asides from the shops found within the flea market, there are numerous souvenir shops all around Monastiraki from the 1 Euro shop to boutiques and galleries – All items to suit all budgets can be found here, allow yourself plenty of time to browse!

Where to Eat & Drink in Monastiraki

If you seek some Greek home cooking served with Cretan raki and accordion music in a small yet mighty French decorated bistro, stop by this restaurant that successfully combines old and new.

This comfortable all-day rooftop cafe and bar is the place to go at night if you’re a music fan as the party lights turn on and the music pumps out with different DJ’s playing almost every night of the week.

This bistro restaurant and garden rooftop cocktail bar (also a hotel, see below) provides a relaxing Mediterranean dining experience with panoramic views of the Acropolis.

Admire the stunning Acropolis views from this rooftop restaurant, cafe, and cocktail bar open early until late. Serving up fusion cuisine with tastes from Greece and Italy, City Zen has heaps of Greek spirit.

If you collect memorabilia from each city and seek some rock ‘n’ roll with a taste of the American classics you’ll want to stop by the Athens Hard Rock Cafe – the sliding roof is a must-see as are Lady Gaga’s boots which are on display here alongside other musical memorabilia.

Soak up the student vibe at this sunny courtyard and roof terrace cafe with views of Stoa of Attalos and Filopappou Hill. Be sure to step inside the 19th-century building as it sometimes holds art exhibitions.

Located right next door to each other within seconds of Monastiraki Metro Station exit, these fast food places serving up souvlaki and gyros are a great place to make a quick stop to fill up on cheap but tasty food. Both historic, family-run places, are touristy now due to their location in the heart of the square. They are not my favorite though, personally I would recommend Kostas souvlaki in nearby Agias Irinis Square (2 Agias Irinis Square).

This multi-purpose cultural space combines a contemporary art gallery with a courtyard cafe/bar and hosts a multitude of workshops, performances, and film screenings in its Ottoman building.

If you’re looking for a place to enjoy a pint whilst watching sport on the big screen, grab a seat at this authentic Irish Pub and order some classic American, British, and Irish food to soak up that beer.

Serving up a choice of 850 Greek and international wines by the glass, including claret and champagne, Vintage also serves up simple yet delicious Mediterranean dishes – try the octopus meatballs!

Enjoy some creative modern Greek cuisine or cocktails as you gaze across to the Acropolis from the rooftop garden bar and restaurant of this historic mansion. Be sure to stop by the 2nd-floor art gallery too!

Serving up traditional Greek dishes since 1932, dine where the locals go and enjoy a meal beneath the plane tree in a quiet square away from the hustle and bustle of the main thoroughfare.

Where to stay in Monastiraki

Located within walking distance of the top attractions and boasting views of the Acropolis, Zillers Boutique Hotel has combined its neo-classical architecture with modern amenities to ensure a comfortable stay in the heart of the city.

This designer boutique hotel has all of its rooms overlooking Monastiraki Square with stunning views of the Acropolis. It boasts soundproofed rooms so the noise of the city will not interfere with a good night’s sleep!