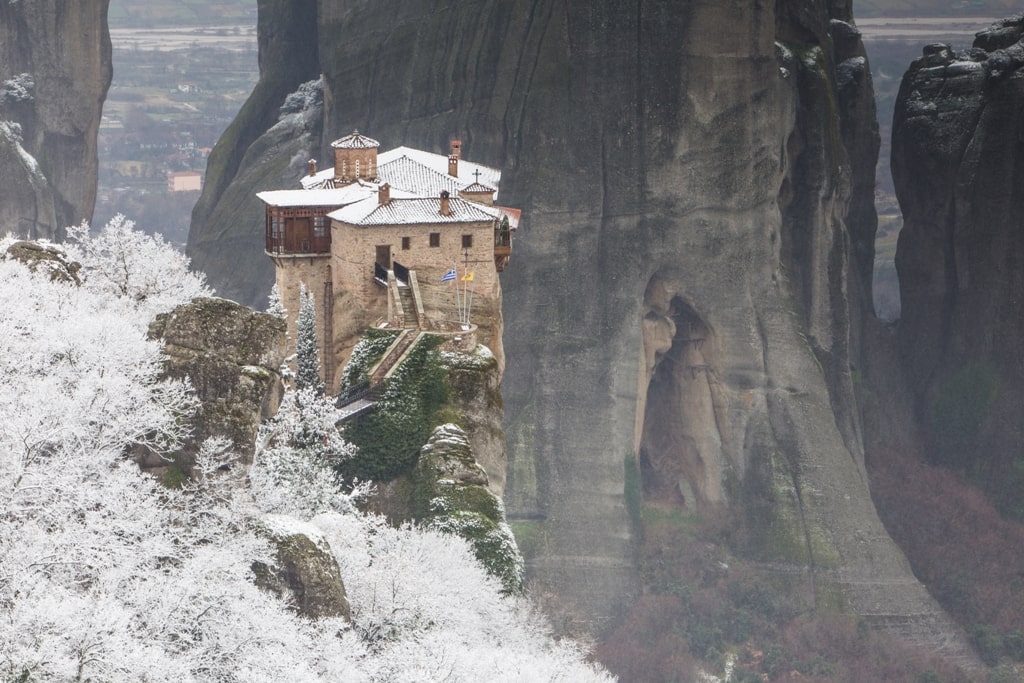 A lot of people ask me “does it snow in Greece ?” You may be surprised but the answer is yes!

Often, when thinking of Greece, we get images of the warm, scorching sun, endless sunny beaches, boiling heat, and ice-cold beverages. We think of the islands and of summer vacations.

But the truth is that Greece also has winters, and during those it snows in many areas, some of them regularly!

That’s why Greece has some of the most popular skiing resorts in the Balkans and is considered by connoisseurs as an excellent winter vacation destination.

Where does it snow in Greece?

It can snow anywhere in Greece. And yes, that does include the islands!

The difference is the frequency.

While it is relatively rare for the islands to see snow, and only get it once every few years, in the mainland snow is a regular phenomenon. In fact, Northern Greece gets snow yearly. Snowfalls can begin as early as November, if it’s a particularly heavy winter, and end as late as April.

You are definitely going to see heavy snow in the regions of Thrace, Macedonia, Epirus, Central Greece, and Attica. As we move more towards the south, regular snow turns into occasional snow, or rare snow, with the exception of the mountains.

For example, while it’s very rare to have snow in Crete, heavy snowfalls are regular and yearly in Crete’s mountains such as the White Mountains and Mt. Psilorites.

Does it snow in Athens?

Yes! It is just not very regular, and snowfalls tend to not last very long. That said, snowfall in Athens is not as rare as you would think. Imagine that in the years 1900 to 1983, Athens only got four years without a single snowfall.

Usually, snowfalls in Athens are significant enough in the northern suburbs rather than central Athens.

There have been, however, several occasions where it snowed heavily in the heart of Athens, enough for driving to be dangerous and for children young and old to throw snowballs at each other.

Where can I enjoy the snow in Greece?

There are several areas in Greece where you can regularly get your winter wonderland! Look for them in Northern Greece, especially in the Northern Regions. Places like Metsovo village in Epirus or Meteora in Central Greece are bound to offer you unparalleled experiences while you bask in the snow, but also when you seek refuge and warmth from it.

Where are there ski resorts in Greece?

Greece has some of the best and most picturesque ski resorts in the Balkans. Depending on how you want to design your skiing and snow adventure, here are a few of the best to consider:

Located within a national park in Central Greece, upon the slopes of one of the most beautiful mountains in Greece, Mt. Parnassos, the Parnassos Snow Center is relatively close to Athens.

It has 19 ski runs of varying difficulty. One of its assets is that it is very near the village of Arahova, a very picturesque mountain town that combines the cosmopolitan with the folklore to give you a unique experience. It’s not an accident that Arachova is called “the Winter Mykonos” of Greece.

Together with the Parnassos Snow Center, the Kalavryta Ski Center are the two closest to Athens, only around 200 km away.

Kalavryta Ski Center is located on Mt. Helmos, a mythical mountain where the river Styx, the ancient river separating the underworld of Hades from the living was said to flow. Apart from enjoying its many ski runs, in the Kalavryta Ski Center you have the opportunity to experience many historical sites, partake in several activities (such as skiing at night!) for adults and children, and many more.

The Kalavryta ski resort boasts beautiful accommodation in the Hippocrates Farm Chalet, where you can enjoy tasty means, but also herbal tea harvested from the mountains around you, honey wine and honey raki, as well as hot chocolate and coffee to keep you warm.

Kaimaktsalan Ski Resort is considered one of the best in Europe. It is located on Mt. Kaimaktsalan in Macedonia, right at the borders between Greece and the country of North Macedonia. It has excellent facilities, a wide range of ski runs, and support for all skill levels of skiers.

Kaimaktsalan is designed to support both leisure skiing as well as professional skiing and competitions, including ski jumping.

While you enjoy Kaimaktsalan, you can stay in its large chalet with the gorgeous view over lake Begoritis. You can use Kaimaktsalan as your base to explore famously historical places like the ancient city of Pella and breathtakingly beautiful sites like the waterfalls of Edessa.

One of the biggest ski centers in Greece, Vasilitsa is located on Mt. Vasilitsa, in the region of Macedonia. It has several ski runs, up to 19 kms long, for skiing and snowboarding. As you enjoy the snow, you will be treated to gorgeous views of the Grevena valley and the surrounding forest and mountain lakes.

If you are a skier that likes a challenge, then the 3-5 Pigadia Ski Resort in Naoussa, Macedonia, is for you. It has two of the most difficult ski runs in the country! This ski resort has great infrastructure, with artificial snow machines, up-to-date lifts, and great accommodation options.

On the mountain of Pelion, near Volos, in the region of Thessaly, you will find the Pelion Ski Center. When you ski on the slopes of Mt. Pelion, you will be treated to the rare opportunity of enjoying the mountain with a view to the sea! The sweeping, breathtaking vistas include the Pagasitic Gulf and a view of the Aegean.

As with so many places in Greece, you will also be surrounded by myth and legend, as Pelion was the legendary mountain of the centaurs.

Located in the Peloponnese, on Mt. Mainalon, the Ski Center is one of the oldest in Greece. You will enjoy the ski runs with gorgeous, picturesque vistas, while surrounded by myth and history. You also have quick access to several traditional villages with stone buildings such as Vytina and Dimitsana, where you will enjoy folklore and heritage as well as tasty meals.

Velouhi is located in Central Greece, in the prefecture of Evrytania. It is a highly significant place for Greece’s modern history, aside the sheer natural beauty that imbues it. Velouhi is great for families, whether you ski or not. With many activities available, from skiing to snowboarding to bobsledding, you are bound to have a good time.

Velouhi ski resort boasts stunning vistas and several ski runs, as well as several other activities for you to enjoy.

Located on the beautiful mountains of Pieria, in the region of Macedonia, the Elatochori Ski Center will treat you to amazing views of Mt. Olympus and the Aliakmon river. It has 12 ski runs and 5 lifts to transport you. This ski center is quite new, so it keeps expanding and adding to its activities and infrastructure. It has a beautiful chalet for you to stay in and enjoy delectable local flavors and dishes.

You will find Seli Ski Center on the slopes of Mt. Vermio, in Imathia, Macedonia. It boasts all degrees of difficulty when it comes to ski runs and has 11 lifts to take you there. There are also two crossroad tracks and it has capacity to hold competitions. It’s the oldest ski center, founded in 1934. It is very near the city of Veria, which has several sites for you to visit when you are on a break from skiing!