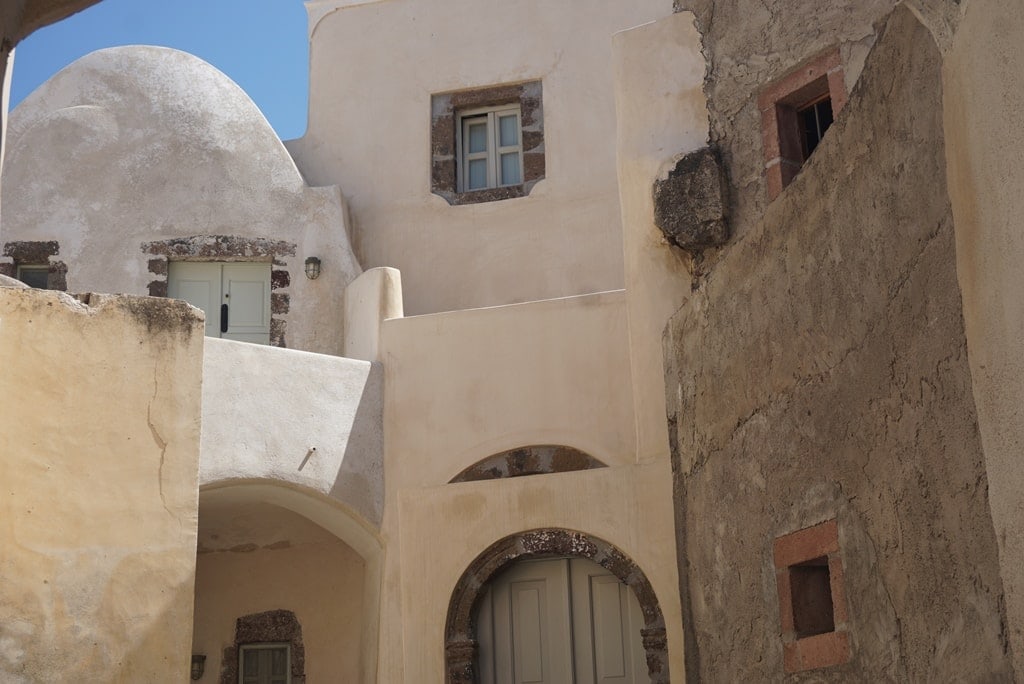 Santorini (Thera) island in Greece is one of the most popular tourist destinations in the world. Its various locations are so gorgeous that the image you think of when the words “Greek island” come to mind are most likely from Santorini.

Usually, most visitors focus on these stunning villages that offer these views and are situated at the edges of the island. And while that can make for a wonderful, dream vacation or honeymoon, if you ignore the heart of Santorini you may miss out on one of the most unique villages it has to offer: Emporio village.

Unlike the villages at the edges of the caldera, such as Oia or Fira, Emporio is situated at the foot of Santorini’s mountain, Mt. Prophitis Elias, roughly in the lower center of the island. It has some of the most enticing architectural designs you can find as a testament to Santorini’s medieval castle history.

Emporio is also the largest village in Santorini, with at least two impressive churches and an even more impressive castle complex waiting for you to explore it. If you ever find yourself in Santorini, make sure you visit or even choose Emporio as the village to stay in. You won’t be disappointed!

Emporio village is situated in the south part of Santorini. It is about 10 km from Fira, Santorini’s Chora, and 12 km from Santorini’s airport. Emporio is quite near the famous black beach of Perissa, only 4 km away.

Emporio gives the feel of being in the lowlands, being at the foot of the mountain, and its views are those of a valley village, complete with vineyards.

You can get to Emporio village by car or bus. Driving times from Emporio to most places in Santorini are under half an hour.

Alternatively, you can visit the village of Emporio on the Santorini Highlights Tour with Wine Tasting & Sunset in Oia. It includes a visit to Pyrgos, Emporio, a winery, Perissa beach (black sand beach), and Oia for sunset.

A brief history of Emporio

Emporio’s name (also called Niborios), which means ‘commerce’ in Greek, is the first hint at how important this village was for Santorini’s economy back in medieval times. Emporio is actually a castle village, boasting one of the best-preserved and most unique medieval castle towns in existence.

Though there is evidence of settlements since antiquity, Emporio’s castle town seems to have begun existence in this form around the 1400s. Its fortified architecture was primarily to defend against piracy which was rampant at the time. Except for Kasteli, which is the actual castle, every house, and building in Emporio is built one close to the other, making the entire village a fortified complex that is very easy to defend and extremely hard to breach.

A few centuries later when piracy stopped being a threat, Emporio expanded beyond the walls of the castle town and progressively took the form we know today.

Things to See and Do in Emporio, Santorini

The winding pathways in Kasteli are very narrow, meant for a single person to walk through, with steep staircases and very narrow doors and windows. The houses in the outer part of Kasteli basically form an unbreachable wall, protecting the rest of the settlement inside.

Kasteli is also unique in that it’s still inhabited, and the dwellers take care and renovate the houses to keep the castle town looking its best. There are beautiful smooth archways and overhead bridges connecting the houses with each other, really giving the feel of a tough medieval castle while also incorporating the Aegean style of architecture.

The colors in Kasteli are also unique, with varying tones of sepia, ochre, and olive colors making the entire castle village look like a 3D impressionist painting.

Like most castle towns and villages, there is only one entrance to it, and in Emporio that is the “Porta” which means ‘door’ in Greek. The moment you pass through it, you will feel as if you have traveled in time.

Santorini was generally fortified against piracy with many ‘goulades’ which means ‘towers’ in Turkish. These towers were large, tall, square in shape, with several floors. There are several to be found around different Santorini villages, such as Oia or Akrotiri, but Emporio’s Goulas is one of the most impressive. To give a measure of its size, it used to have a small chapel inside it which has been eroded by time.

On the north side of the village, you will find Goulas’ tower. Emporio’s Goulas tower dates back to the Venetian period and is thought to have been built in the 15th century. Goulas’ tower is one of the strongest fortifications of the village, designed to enhance the safety of all the trading transactions taking place in Emporio. Originally the tower belonged to a feudal family called Dergantas, but later the tower was acquired by the monks of St. John’s monastery in Patmos island.

Explore Goulas tower and enjoy its sweeping view of the entire area, with the caldera and the sea in the distance.

Emporio features some of the most unique and beautiful churches you will find in Santorini. Explore as many as you can as you lose yourself in Emporios’ many narrow alleyways, but definitely lookout for these:

As you enter Emporio village coming from Fira, you will find this remarkable little church. It is actually a sepulchral monument dating from the 3rd century BC. It is square in shape and made entirely of gray marble, hence the church’s name “Marmaritis” which means “of marble”.

This ancient monument was turned into a church in modern times. Inside there is still an ancient alcove with an inscription indicating that the statue of the goddess Vasileia was supposed to be installed in it.

Church of Our Lady Messani (or Church of Old Panaghia)

This church is thought to have been built during the 16th century and boasts the most gorgeous bell tower in the village: it looks like a tower with several floors, whitewashed and decorated like a wedding cake.

The church’s iconostasis is also gorgeous, made in 1880 out of exquisitely carved wood. The churchyard also is great to take a break from your explorations.

Church of the Transfiguration of Our Savior (or Church of Christos)

Christos is a beautiful church that will charm you with its gorgeous churchyard and beautiful front and belltower. It mostly stands out for its intricate mosaic floors and its stunning gold-plated iconostasis. If you happen to be at Emporio in August, don’t miss out on the grand liturgy on August 6th with the traditional blessing of Santorini’s famous split peas, where tasty split peas are given out after a procession.

See the windmills at Gavrilos Hill

Right opposite Goulas’ tower you will find Gavrilos hill. At its top, there are eight windmills constructed in the 19th century. They are currently undergoing reconstruction to ensure that two of them work as they were intended, while the others serve as a museum, a café, and shops where you can buy some of Santorini’s renowned local produce.

The windmills are six meters tall and while they’re still under renovation, you can explore them and enjoy the breathtaking view of the entire valley and the coast.

Santorini’s wine production is easily 3,000 years old and the wines the island produces today are coveted as high quality. There are 50 indigenous types of vines cultivated in the traditional way, with the Assyrtiko variety being the most prevalent.

There are several breweries and wineries all over Santorini, but at Emporio, you can book a tour to get to the best of them and sample some of the best wines of the Cyclades! There are even old wineries turned into villas for you to stay and be surrounded by history and culture.

Although Emporio is not a coastal village, it is located very near the very popular and famous black sand beaches of Perissa and Perivolos and is only a few minutes’ drive away from them. In fact, because the beaches are successive, you can virtually walk from one to the other in one long promenade.

The beaches feature full organization and amenities, including options for a wide variety of water sports, clubs, cafés, and tavernas. The waters are crystal clear and beautifully contrast with the unusual volcanic black of the sand. Whether you like to lounge in your sunbed or be active in the sea, you will fall in love with both!

How do I get to Emporio, Santorini?

From Fira’s central station, you can take the bus to Perissa and ask for a stop at Emporio alternatively if you have a car, the village is around 10 km away from Fira. Finally, you can also take a taxi there.

What is the best village in Santorini?

Santorini has many beautiful villages, among them, Emporio and Pyrgos are some of the best to visit.

Planning a trip to Santorini? Check out my guides: