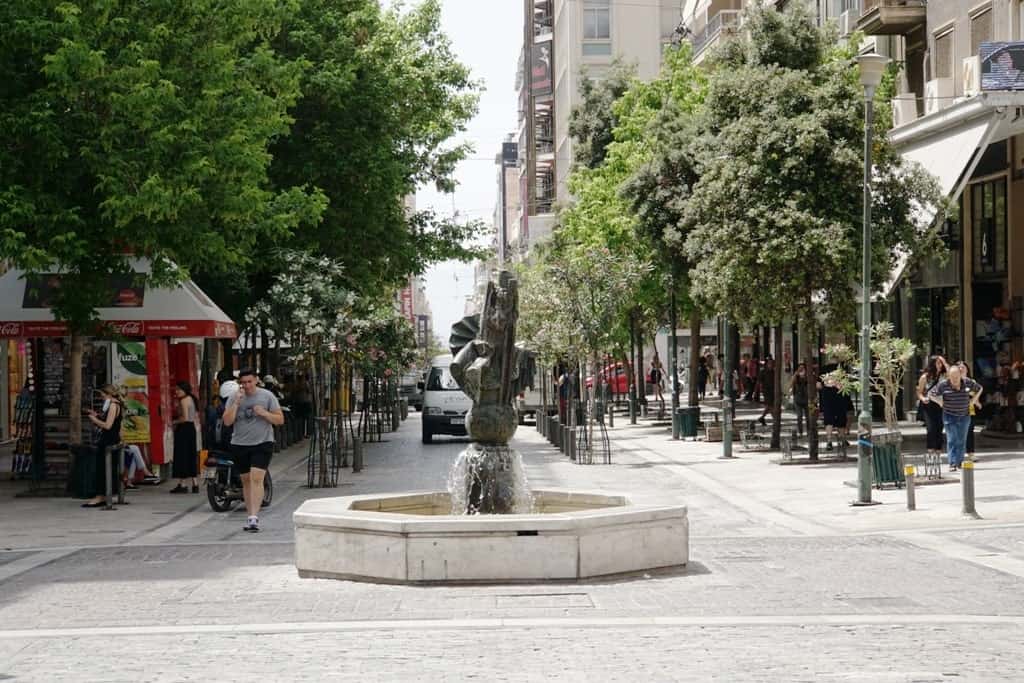 Ermou Street is one of the most famous streets in central Athens. It stretches for 1.5 kilometres, connecting Syntagma Square with the Karameikos archaeological site. Ermou Street is a shopper’s paradise and is always popular – which is why most of it was pedestrianised some years ago. Although you will be tempted to look at the colourful displays in the shop windows, do stop and look up regularly, as the architecture of many of the buildings is impressive.

Ermou Street was originally a couple of markets joined by a road, where Athenians could buy everyday necessities and a few exotic items from merchants who had bought them by ship to the nearby port of Piraeus. Gradually Ermous Street developed into shops and by the mid-19th century,  horse-drawn carriages brought elegant ladies to buy the latest European fashions or to visit one of the dressmakers’ workshops.

Barrel organ players and dancing bears entertained everyone. At the beginning of the 20th century, the road was paved and maintained its popularity. By 1990s Ermou Street was getting clogged every day with endless cars, vans and buses. The decision was made to turn much of Ermou Street into a pedestrian precinct because it had become so popular and was listed as the 10th most important shopping street in the world.

Syntagma Square, at its end,  is the city’s most famous square and one where public speakers regularly deliver their speeches and political rallies are held. There are broad steps that lead down from the square,  past a large ornamental fountain and onto the start of Ermou Street.

All of the international names can be found in Ermou Street including Marks & Spencer, Benetton and the Spanish chains, Zara and Bershka. Shopping is easy if you do not speak Greek as many staff members in the various shops speak English. The Hondos Centre is well worth a visit as it has many departments that are all selling cosmetics and beauty products – the choice is unbelievable!  As you walk along the street, watch out for the signboard of Nikos Spilliopoulos as this shop is a treasure trove of beautiful Italian shoes and stylish leather handbags.

There are bargains to be had if you are patient and stores often have promotions of seasonal stock. Interestingly, the prices in the shops nearer to Monastiraki Square tend to be lower.

There are often street entertainers including musicians, people miming and street traders. If you feel you need a rest, you can branch up to one of the side streets, where you will find coffee shops and also fast food outlets serving delicious souvlakia (pork kebabs in pitta bread with salad), tiropita (cheese pies) and spanakopita (spinach pies).

There are seasonal treats to buy from the street traders including barbecued corn cobs in the summer, roasted chestnuts in the autumn and cups of salep during the colder winter months. Salep is a popular herbal tea that is said to help guard against winter ailments.

Once you are about one-third of the way along Ermou Street you will come across the beautiful little Byzantine church of  Panayia Kapnikarea – you can’t miss it as it is right in the middle of the street! There are usually many people sitting outside the church, catching their breath or they are husbands that have been deposited there by their wives whilst they pop into a shop!

The church dates from the 11th century and is dedicated to ‘the Presentation of the Virgin Mary’. The word ‘Kapnikarea’  refers to the profession of the person who funded the construction of the church– he was a tax collector!

The next area in Ermou Street is Monastiraki Square which really is a lively square with hotels, shops, the Metro station and usually several street musicians that are vying for your attention! There is a great flea market with stalls selling music, clothes, fashion jewellery and all kinds of souvenirs.

On the other side of the square, this part of Ermou Street is known as ‘Psiri’ and is known for its restaurants, cafés, bars and ouzeries.

The final section of Ermous Street is in the area known as Thisseio which is very close to the Acropolis. Once again this part of the street has been pedestrianised and was renovated for the 2004 Olympics and given the name ‘Grand Promenade’. It is the perfect place to end your time exploring Ermou Street. You can relax with a frappé in a coffee shop looking towards the Acropolis and appreciate what a special city Athens is…