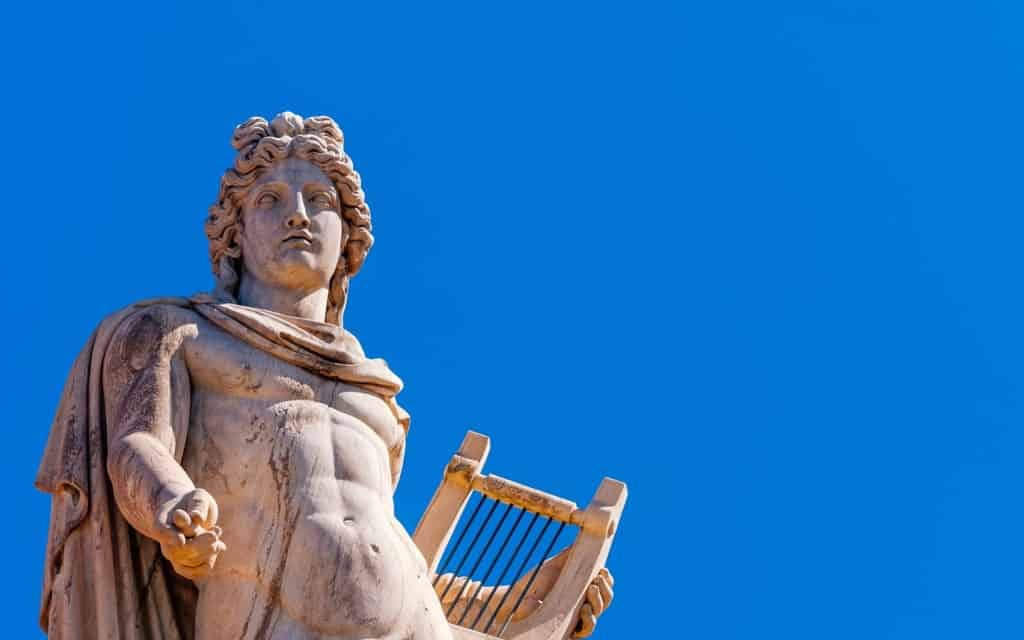 Apollo is one of the ancient Greek gods, a member of the 12 gods of Olympus. He is easily one of the most popular ones, too! Associated with the sun, music, the arts, and oracles among many things, Apollo has innumerable myths and legends surrounding him. He is one of the few gods who retained his name even when the Romans claimed him as part of their pantheon!

As the sun god of the Greeks, he is always depicted as a strong, athletic, clean-shaven young man. He was considered the most handsome god of all! His hair is golden and he is swathed with the sun’s rays so he is always lustrous. He has many symbols, including the laurel and the lyre.

That, however, barely scratches the surface of who Apollo was! Here are some interesting facts that will shed some more light on this sun god’s background:

Apollo’s parents were Zeus, the king of the gods and god of the sky and lightning, and Leto. Leto was the daughter of two Titans and is described as the gentlest goddess in all Olympus. She was always willing to offer help when asked, and always was soft-mannered.

When Zeus saw her, he fell in love with her. From their union, Leto became pregnant with twins. However, Hera, Zeus’ wife, was enraged that he cheated on her again. Unable to retaliate against Zeus, she took revenge on Leto instead. Hera ordered her not to give birth on stable land, be it mainland or island. That left Leto without any place to give birth.

Fortunately, just as she was ready to have her babies, a floating island emerged from the sea. That’s where Leto went to have her babies. First, she had Artemis, goddess of the hunt, and then she had Apollo. Once the babies were born, the island stopped floating and became stable. It was called Delos, became a sacred island for the ancient Greeks, and you can still visit it in the Cyclades!

Apollo as a god

Apollo is associated with the sun, although the Greeks also had Helios, the actual deified sun, coexisting! Apollo is a god of a lot of things but mostly of music and the arts. That’s why one of his key symbols is the lyre.

The story of how he founded his main temple at Delphi is closely connected with his ability to give powers of clairvoyance to mortals. To be able to claim his temple, he had to kill a giant snake, Python, who was guarding the oracle. Once he shot Python dead with his arrows, Apollo became the ruler of Delphi and all oracles.

Apollo used to be the owner of a large flock of cows. However, that changed when Hermes, the god of commerce and mischief was born. Hermes was hungry and came across the cows. He then decided to lure them away and eat them.

When Apollo realized that, he was furious. To appease him, the young Hermes created a lyre from the shell of a tortoise. Apollo liked the music it made so much that he forgave Hermes and gifted him the iconic caduceus.

He became mortal a couple of times

Apollo’s son Asclepius was such a good doctor that he managed to cure death. That’s right, Asclepius started bringing people back from the dead! This carried on for a bit, but after a while, Hades asked Zeus to intervene because people weren’t dying when they should, which was upsetting the order of things.

Afraid that Asclepius might even teach his technique for bringing people back from the dead to others, Zeus struck him dead with lightning. However, when Apollo learned that Zeus had killed his son, he was livid.

Unable to retaliate against Zeus directly, he instead unleashed his arrows at the Cyclopes who were making Zeus’ lightning. The very lightning with which he killed Asclepius. Zeus was also enraged when that happened, but he recognized Apollo’s grief.

He brought back Asclepius as a god and made him a constellation in the sky. That didn’t save Apollo from punishment, though: Zeus stripped him of his immortality and sent him to earth as a mortal to serve the king of Phaerae in Thessaly for some years.

The second time he lost his immortality was when he and Poseidon tried to overthrow Zeus. They failed and for punishment, Zeus stripped them both of their immortality and sent them to Troy, to build the city’s fortified walls. That’s why Troy’s walls were considered impregnable and the city invincible (until the Trojan War…)

His entourage were the nine muses

As god of the arts, Apollo was surrounded by the nine muses. They were goddesses, each one a patron of specific art. Calliope, the one considered their leader, was the patron goddess of poetry and eloquent speech. She and Apollo were lovers. When Apollo was entertaining the gods with his golden lyre, the muses were often accompanying him.

Cassandra tried to dupe him

Cassandra was a beautiful Trojan princess who wanted to gain the power of clairvoyance and become an oracle. She wasn’t particularly fond of Apollo but she still did everything she could to catch his attention.

When Apollo saw her and was charmed by her looks, he wanted to take her to his bed. Cassandra accepted on the condition that he grant her the power of the oracle. Apollo agreed and blessed her with the gift, but afterward, Cassandra wouldn’t accept his advances as had been their bargain.

Apollo was unable to take back his gift as blessings from the gods could not be reversed. Instead, he cursed her to never be believed when she shared her prophecies with others. When she predicted the fall of Troy and tried to warn the Trojans against putting the Trojan Horse within the city walls, nobody believed her, and Troy fell.

He was unlucky in love

Apollo had many lovers, both male, and female, but he never seemed to have any relationship last. For all his weakness for nymphs and beautiful mortals, very few were willing to receive his advances.

For example, the nymph Daphne ran away from him when he tried to pull her into his arms. When Apollo gave chase, she grew so desperate to avoid becoming his lover that she turned into the laurel tree. Disappointed and forlorn, Apollo made the laurel his sacred plant since he wouldn’t have Daphne herself.

However, some lovers did return his affections willingly. One famous young man was Hyacinth, a beautiful Spartan prince. He and Apollo were in love and spent their time together as a loving couple. However, the god of the west wind Zephyrus was also in love with Hyacinth and he was enraged when the prince rejected his advances. He swore revenge.

One day, when Apollo was throwing the discus while Hyacinth watched, Zephyrus sent the wind to drive the discus back, straight upon Hyacinth’s head. When the discus struck the prince, he fell dead. Apollo was deeply grieved and turned Hyacinth into a flower, the hyacinth.

Apollo also loved and had a son with the muse Calliope, who loved him back. That son was the famous Orpheus, the best musician and lyre player that ever lived.

Apollo’s wrath was terrible when turned against mortals. To exact revenge or to punish for grievances, Apollo would shoot his arrows at humans. When they struck, at best humans would fall ill with a terminal illness.

At worst, a plague would be cast on the entire area. Apollo sent the plague to people either with his arrows or by unleashing mice in their city. When he was appeased, he would shoot the mice dead, which is why one of his names is “mice daemon.”

One of the most famous times when he brought the plague upon people was during the Trojan war. Due to the insolence of Agamemnon against one of Apollo’s priests, Apollo took revenge by casting plague upon the encampment of the Greeks on the Trojan shore. It became so bad that Agamemnon was forced to redeem himself to Apollo’s priest. Only then did Apollo stop the plague.

Interesting Facts about Aphrodite, Goddess of Beauty and Love

Interesting Facts About Hermes, the Messenger of Gods

Interesting Facts About Hera, Queen of the Gods

Interesting Facts About Persephone, Queen of the Underworld

Interesting Facts About Hades, God of the Underworld