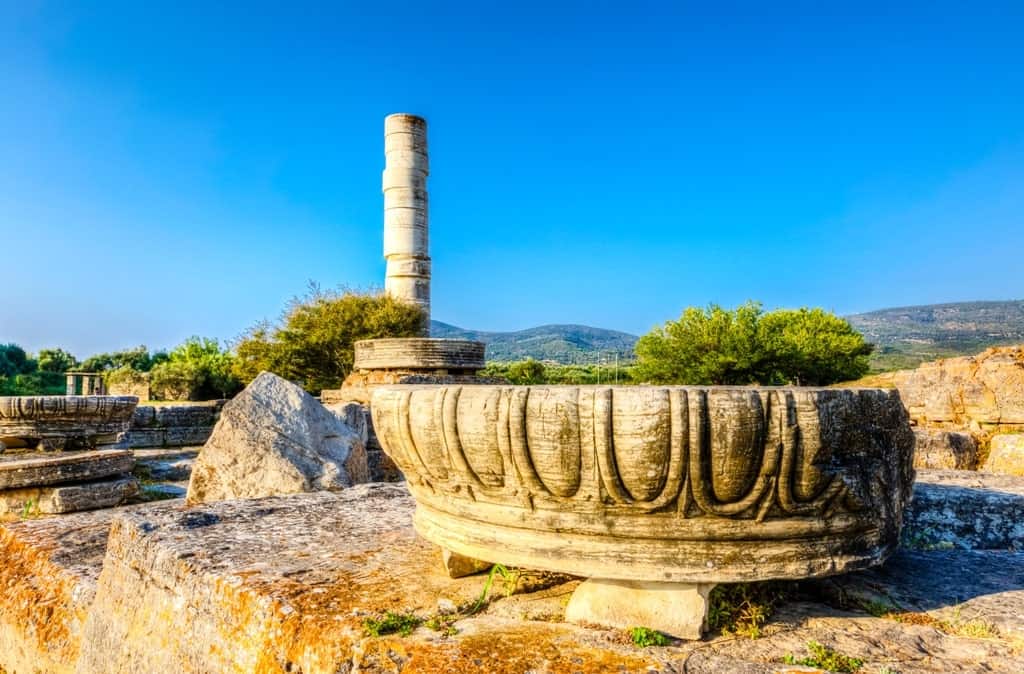 Hera was one of the 12 Olympian gods, the sister, and wife of Zeus, and thus the Queen of the gods. She was the goddess of women, marriage, childbirth, and family, and she was widely seen as a matronly figure who presided over weddings and other important social ceremonies. This article presents some of the most interesting facts about the Queen of Mount Olympus.

Hera’s name is connected to the word hora

The word Hera is often connected with the Greek word hora, meaning season, and it is often interpreted as “ripe for marriage”. This makes clear the status that Hera had as the goddess of marriage and marital union.

The first enclosed roofed temple was dedicated to Hera

The wife of Zeus is also very likely to be the first deity that the Greeks dedicated an enclosed roofed temple sanctuary to. Built in Samos around 800 BC, it was eventually replaced by the Heraion of Samos which is one of the largest Greek temples ever built in antiquity.

Hera was reborn out of her father, Cronus

After Hera was born, she was immediately swallowed by her father, the Titan Cronus, since he had received an oracle that one of his children was going to overthrow him. However, Cronus’ wife, Rhea, managed to hide Zeus, her sixth child, and save him from him.

Zeus grew up, he disguised himself as an Olympian cup-bearer, poisoned his father’s wine with a potion, and tricked him into drinking it. This led to Cronus disgorging Zeus’ siblings: his sisters Hestia, Demeter, and Hera; and his brothers Hades and Poseidon.

Hera was tricked by Zeus into marrying him

Since Hera at first refused Zeus’ advances, he transformed himself into a cuckoo, knowing very well that Hera had a great love for animals. He then flew outside her window and pretended to be in distress due to the cold. Hera felt sorry for the little bird, and when she took it into her arms to warm it, Zeus transformed back into himself and raped her. Hera was then ashamed of being exploited and so in the end she agreed to marry him.

Hera was often portrayed as a jealous wife

Although Hera remained faithful to Zeus, he went on to have several extramarital affairs with other goddesses and mortal women. Therefore, Hera was often depicted as a nagging, jealous and possessive wife, and due to her immense hatred for infidelity in marriages, she was often seen as a deity that punished adulterers.

Hera took great pride in her beauty and she tried to emphasize it by wearing a high crown that made her look even more beautiful. She was also very quick to get angry if she felt that her beauty was being threatened. When Antigone boasted that her hair was more beautiful than Hera’s, she turned it into serpents. Similarly, when Paris chose Aphrodite as the most beautiful goddess, Hera played an instrumental role in the victory of the Greeks in the Trojan War.

Hera had a festival dedicated to her honor

Every four years, an all-female athletic competition called the Heraia was held in some city-states. The competition consisted primarily of foot races for unmarried women. A crown of olive and a portion of the cow that was sacrificed to Hera as part of the festivities was offered to the winning maidens. They were also given the privilege of dedicating statues inscribed with her name to Hera.

Hera was the mother of 7 children, of which Ares, Hephaestus, Hebe, and Eileithyia are the best known. Ares was the god of war and he fought on the side of the Trojans during the famous Trojan War.

Hephaistos was born without a union with Zeus and was thrown out of Mount Olympus by Hera when he was born due to his ugliness. Hebe was the goddess of youth and Eileithyia was considered to be the goddess of childbirth, having the power to delay or prevent births.

Alongside her title as the Queen of Olympus, Hera had also several other epithets. Some of them were ‘Alexandros’ (defender of men), ‘Hyperkheiria’ (whose hand is above), and ‘Teleia’ (the Accomplisher).

Hera had many sacred animals

Hera was the protector of several animals, and for that reason, she was called “the Mistress of Animals”. Her most sacred animal was the peacock, signifying the time Zeus transformed himself and seduced her. The lion is also sacred to her because it drew her mother’s chariot. The cow was also considered sacred to her.

Check out: The Sacred animals of Greek Gods.

Some of the children that Hera had were conceived without the help of Zeus. For instance, she conceived Ares, the god of war, via a special flower from Olenus, while she became pregnant with the Hebe, the goddess of youth, after eating a lot of lettuce. Lastly, Hephaestus came out as a result of pure jealousy after Zeus bore Athena from his head.

Hera and Persephone share the pomegranate as a sacred fruit

It was believed in antiquity that the pomegranate had a symbolic significance. For Persephone, accepting the pomegranate from Hades meant that she would have to return to the Underworld at some point. On the other hand, for Hera, this fruit was a symbol of fertility, as she is also the goddess of childbirth.

Hera assisted the Argonauts in obtaining the Golden Fleece

Hera never forgot that the hero Jason helped her cross a dangerous river while she was disguised as an old woman. For that reason, she provided crucial assistance to Jason´s quest to find the golden fleece and regain the throne of Iolcus.

Contrary to Zeus, who used to transform himself into animals in order to seduce beautiful women, Hera used to turn beautiful women into beasts when she was angry at her husband’s affairs. The goddess had turned the nymph Io into a cow, the nymph Callisto into a bear, and the Queen Lamia of Libya into a child-eating monster.

2 thoughts on “Interesting Facts About Hera, Queen of the Gods”