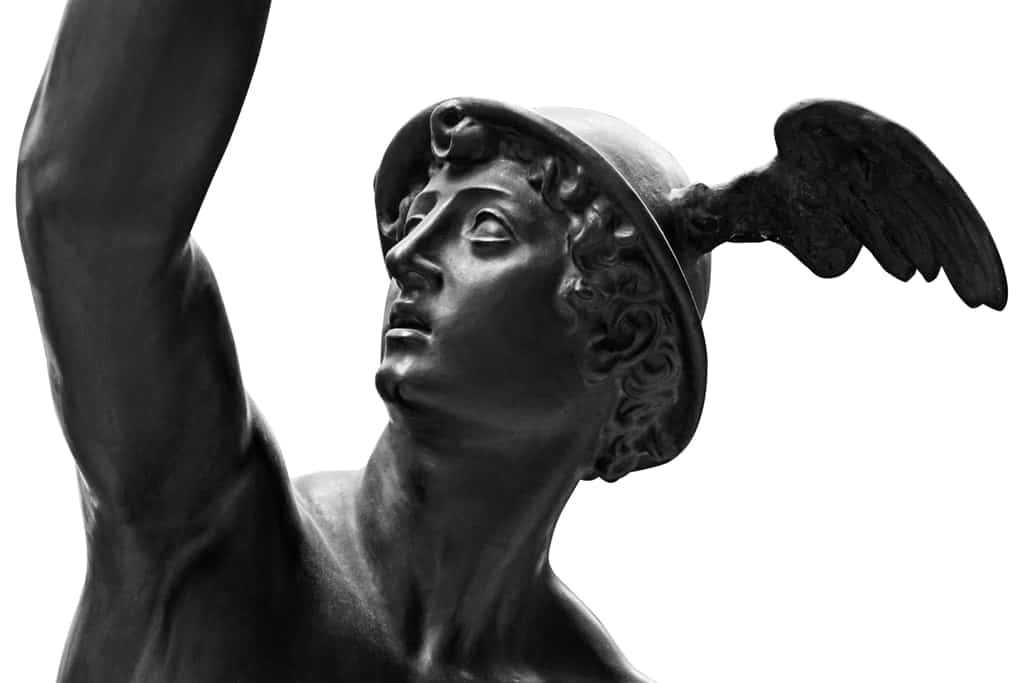 Hermes was the Greek god of travelers, athletes, thieves, the messenger of the gods, and the guide of the souls of the dead to the Underworld. He was the second-youngest Olympian god, born of the union between Zeus and the Pleiad Maia. Hermes also frequently appears as a trickster, capable of outwitting the other gods, either for the benefaction of humankind or for his own personal amusement and satisfaction.

Hermes was the child of a nymph

The messenger of the gods was the son of Zeus and Maia, a sea nymph, who gave birth to him in a cave on Mount Cyllene. That is why he gained the name “Atlantiades” since his mother was one of the seven daughters of Atlas, a leader of the Titans.

Hermes was usually depicted as a young god

In artistic representations, Hermes was usually depicted as a young, athletic, beardless god, who wearied a winged hat and boots, while also carrying a magic wand. At other times, he was represented in his pastoral character, bearing a sheep on his shoulders.

He was blessed with extraordinary speed, and he was in addition a gifted orator, acting as a mediator between gods and mortals. Thanks to his splendid diplomatic traits, he was widely accepted as the patron of rhetoric and languages.

Hermes had many symbols

Some of Hermes’ symbols include the Caduceus, a staff that appears in a form of 2 snakes wrapped around a winged staff with carvings of the other gods, while at other times, he appears holding a wand. Other symbols of his include the rooster, the pouch, the tortoise, and the winged sandals. The sacred number of Hermes was four, and the fourth day of the month was his birthday.

Hermes had two children with Aphrodite

Hermes was particularly enamored with Aphrodite, the goddess of love. They had two children together, Priapus and Hermaphroditus. He was also the father of Pan, a creature of the forest who was half man and half goat, and who was thought to be the god of shepherds and of flocks.

Hermes had the peculiar job of leading the souls of the dead to the realm of Hades. That is why he was known as a psychopomp. He was also the only Olympian allowed to travel to every corner of the world: Heaven, Earth, and the Underworld.

Hermes was the messenger of the gods

Since he was the primary messenger of the gods, Hermes appears in numerous tales of Greek mythology. His excellent skills as a speaker and his extreme speed made him an excellent messenger, one who could transfer the wishes of the gods, and especially of Zeus, to every corner of the Earth. For instance, he was once ordered by Zeus to tell the nymph Calypso to set Odysseus free, so that he could return to his homeland.

Hermes is considered a great inventor

The messenger of the gods was deemed to be extremely intelligent, and he was thus considered to be the god of invention. He is credited with a great number of inventions, such as the Greek alphabet, music, boxing, astronomy, numbers, and in some stories, even fire.

Hermes stole the cattle of Apollo

When Main gave birth to Hermes in a mountain cave, she fell asleep exhausted. Then, the young god managed to escape and steal some cattle from the god Apollo. When Apollo found out about the theft, he demanded his cattle back, but when he listened to Hermes play the lyre, an instrument that young god crafted from the shell of a tortoise, he was much impressed, allowing Hermes to keep the cattle in return for the lyre.

Hermes was a natural-born trickster

Hermes was well known as the archetypal trickster of Greek mythology. He was seen as the god of thieves and trickery since in many tales he relied on cunning and guile to win battles. Zeus once sent him to steal his sinews back from the monster Typhon, and in another myth, Hermes assisted the god Ares to secretly escape from the Aloadai giants. He also once used his lyre to put the hundred-eyed giant Argus to sleep, who he then slew in order to rescue the maiden Io.

It is usual that Hermes would help heroes complete their missions. He once helped Heracles in capturing Cerberus, the three-headed dog that guarded the gates of the Underworld. He also had the responsibility of accompanying Persephone from the Underworld back on Earth.

Hermes had the job of rescuing and taking care of infants such as Helen, Arcas, and Dionysus, and in addition, he gave Odysseus a holy herb, that only he could dig deep enough to find, so that the king of Ithaca would not fall prey to the spells of the witch Circe. In yet another tale, Hermes assisted Perseus in his quest to slay the Gorgon Medusa, a winged human female who had living snakes as hair.

Hermes participated in many other myths

Hermes was the god responsible for giving Pandora a human voice, allowing her to create chaos and bring evil on men. He also took part in the battle of the Giants, assisting in the gods’ victory. Hermes was also the one who led the 3 goddesses, Hera, Athena, and Aphrodite, to Mount Ida, in order to be judged by Paris, the prince of Troy, as to which goddess was the most beautiful, offering, at last, the Apple of Eris to Aphrodite.

Since Hermes was the god of travelers, it was natural that many of his worshippers would have spread his stories and images far and wide. Furthermore, the statues erected along roads and borders around Greece were known as Herms, and they functioned as boundary markers and a symbol of protection for travelers.