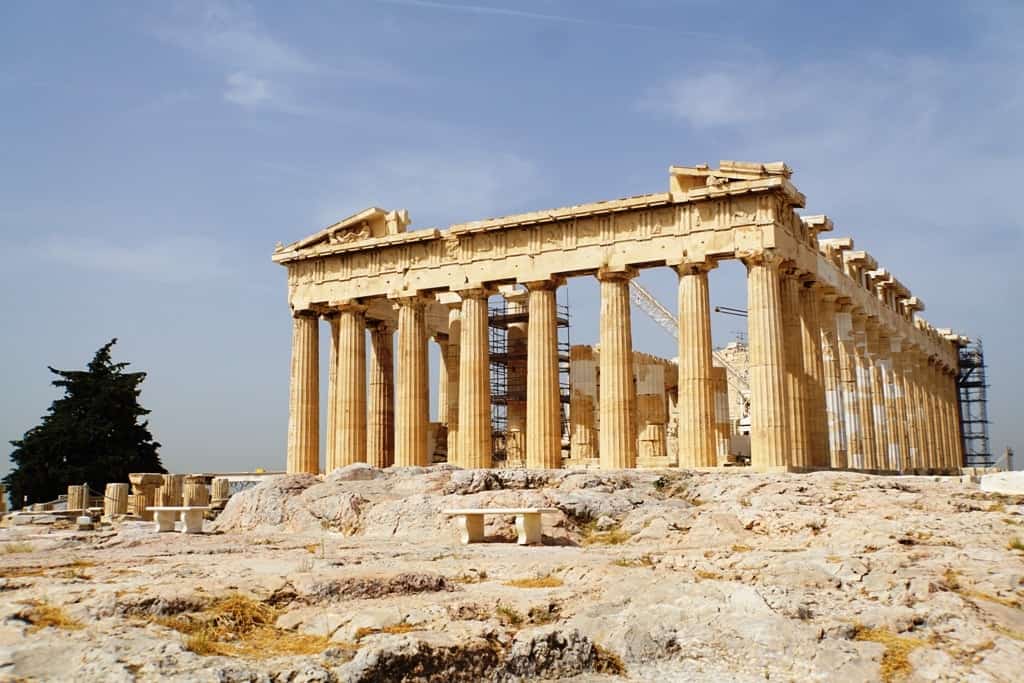 Its most important features were simplicity, balance, harmony, and symmetry, the way in which the Greeks viewed life itself. This article presents some of the most famous Greek architects, mythical and historical, who managed to leave their mark in history of architecture.

Ancient Greek Architects and Their Works

In Greek mythology, Daedalus was seen as a symbol of wisdom, power, and knowledge. He appeared as a skillful architect and craftsman, and the father of Icarus and Iapyx. Among its most famous creations are the wooden bull of Pasiphae and the Labyrinth which he constructed for Minos, King of Crete, where the Minotaur was imprisoned.

He also crafted wings glued together by wax, which he used along with his son, Icarus, to escape Crete. However, when Icarus flew too close to the sun, the wax in his wings melted, and he fell to his death.

Pheidias (480-430 BC) was one of the most famous sculptors and architects of antiquity. Phidias is often credited as the main instigator of Classical Greek sculptural and architectural design. He designed the statue of Zeus at Olympia, considered one of the Seven Wonders of the Ancient World, as well as the statue of Athena Parthenos inside the Parthenon, and Athena Promachos, a colossal bronze statue that stood between the temple and the Propylaea.

Alongside his colleague, Callicrates, Ictinus was responsible for the architectural plans of the Parthenon, the greatest Greek temple ever built. He also co-wrote a book on the project, which is now lost, in collaboration with Carpion.

Besides being the co-architect of the Parthenon with Ictinus, Callicrates was the architect of the temple of Nike, in the sanctuary of Athena Nike on the Acropolis. Callicrates is also identified by an inscription as one of the architects of the Classical circuit wall of the Acropolis, while Plutarch also claims that he was contracted to build the Middle of three amazing walls linking Athens and Piraeus.

Active in the 6th century BC on the island of Samos, Theodorus was a Greek sculptor and architect, who is often credited with the invention of ore smelting and of the craft of casting. Others credit him with the invention of the level, the ruler, the key, and the square. According to Vitruvius, Theodorus was the architect of the Heraion of Samos, a large Archaic Doric order temple built in honor of the goddess Hera.

Hippodamus of Miletus was a Greek architect, urban planner, mathematician, meteorologist, and philosopher of the 5th century BC. He is considered to be “the father of European urban planning”, and the inventor of the “Hippodamian plan” of city layout.

Among his greatest achievements is the design of the port of Piraeus for Pericles, of the new city of Thurium in Magna Grecia, and of the refounded city of Rhodes.  Overall, his architectural plans were characterized by order and regularity, contrasting the intricacy and confusion common to cities of that period.

Born during the 4th century BC, Polykleitos the Younger was an ancient architect and sculptor and the son of the Classical Greek sculptor Polykleitos, the Elder. He was the architect of the Theatre and Tholos of Epidaurus. These works were deemed significant, since they exhibited elaborate detailing, especially on the Corinthian capitals of the interior columns, which greatly influenced most later designs of that order.

Born in the 3rd century BC, Sostratus of Cnidus was a famous Greek architect and engineer. It is believed that he had designed the lighthouse of Alexandria, one of the Seven Wonders of the Ancient World, around 280BC. Since he was also a friend of Ptolemy, the ruler of Egypt, he was allowed to sign the monument. Sostratus was also the architect of the Mausoleum of Halicarnassus, which was also considered one of the Seven Wonders of the World.

Known as the father of the Galen, the famous anatomist, and philosopher, Aelius Nicon was an architect and builder in the 2nd century AD Pergamon. He was also a mathematician, astronomer, and philosopher, and he was responsible for the architectural design of several important buildings in the city of Pergamon

Dinocrates was a Greek architect and technical advisor to Alexander the Great. He is mostly known for his plan for the city of Alexandria, the monumental funeral pure for Hephaistos, and the reconstruction of the Temple of Artemis at Ephesus. He also worked on an incomplete funerary monument for Alexander’s father, Philip II, and on several city plans and temples in Delphi, Delos, Amphipolis, and elsewhere.

Considered one of the builders of the Temple of Artemis at Ephesus, Paeonius was a notable architect of the Classical Age. He also began to build a temple of Apollo at Miletus, alongside Daphnis of Miletus, the ruins of which can be seen at Didyma near Miletus.