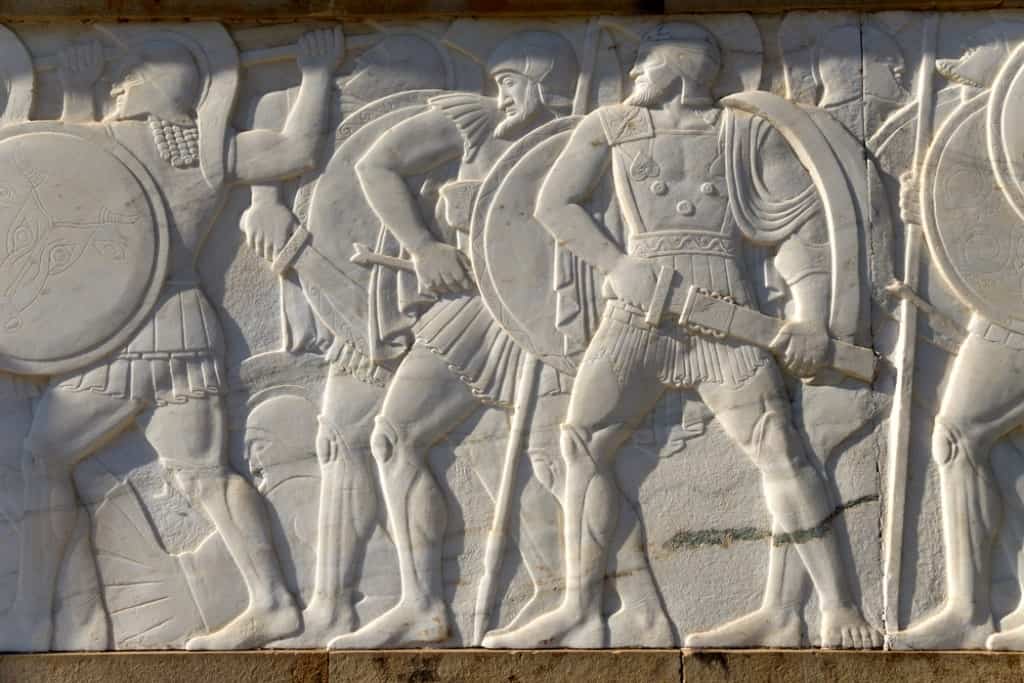 War played a central role in the life of every Greek. Greek society was so accustomed to war, that it even deified it in the form of Ares, the god of war. Through the centuries, several battles took place between the Greek city-states, which are now considered to be turning points in Greek history. The outcomes of these battles shaped the future course of Greek civilization and immortalized the most important participants.

7 Ancient Greek Battles You Should Know

Battle of Marathon 490 BC

The battle of Marathon was the culmination of the effort of the Persian King Darius I to conquer Greece. In 490 BC, Darius demanded earth and water from the Greek city-states, which essentially meant giving up their sovereignty and subjugating the vast Persian Empire.

Many city-states agreed to be subjugated, but Athens and Sparta did not; they even executed the Persian messengers. Therefore, the Persian navy landed that year on the shores of Marathon, on the northeast of Athens.

Athenian troops marched towards the beach, aided only by a small force from Plataea, since the Spartans were celebrating Carneia, a religious festival that forbade military actions during that time.

Miltiades, the Athenian general, devised a genius military tactic that allowed his forces to easily defeat the Persians on the battlefield. Thus, the invasion ended in failure and the Persians returned to Asia.

The Greek victory in Marathon was of great significance since it proved that the Persians, although powerful, were not invincible.

Battle of Thermopylae 480 BC

Ten years after the failed invasion of 490 BC, the new Persian King Xerxes I launched a new military campaign that aimed at the total subjugation of Greece. The Greeks agreed that the best way to stop the land invasion from the North was to block the narrow passage of Thermopylae and the water pathway of Artemisium.

However, again due to the religious festival of the Carneia, Sparta could not mobilize it whole army, and so it was decided that King Leonidas would march to Thermopylae with a small force of 300 men.

The Spartans, alongside 5000 Thespians, held their ground for three days against numerically superior enemy forces, until they were at last surrounded by the Persians, and killed to the last man.

Although the Spartans were defeated in Thermopylae, the battle boosted the morale of the Greeks and gave them the necessary time to better prepare for their collective defense.

Check out: The 300 of Leonidas and the battle of Thermopylae.

Battle of Salamis 480 BC

Widely considered as one of the most important naval battles of antiquity, the battle of Salamis was a turning point for the Persian invasion, since it was here that the Persian fleet was essentially destroyed.

The Persian forces managed to sack the city of Athens, and so the Athenians had to abandon their homes and take refuge in the island of Salamis. Themistocles was the Athenian general who led the Greek defense, and the one who set the battle tactic that ultimately defeated the Persian navy.

The defeat of the Persians in Salamis was overwhelming, and the Persian king was forced to retreat to Asia, in fear of being trapped in Greece. Overall, the Persian prestige and morale was significantly damaged, and the Greeks managed to protect their homeland from conquest.

Battle of Plataea 479 BC

The battle of Plataea effectively put an end to the Persian invasion of Greece. In this battle, the united Greek forces of Athens, Sparta, Corinth, and Megara, among others, faced the Persian general Mardonius and his elite forces.

The battle was a test of patience, since for more than 10 days the two armies stood across each other, with only small incidents taking place. Once again, the Greeks proved to be superior tacticians, since they managed to perform a tactical retreat, that lured the Persians into following them.

The Greeks faced the Persians at an open field next to the town of Plataea. During the chaotic battle, a Spartan warrior managed to kill Mardonius, causing a general Persian retreat. The Greek forces stormed the enemy camp killing most of the men inside. The defense of Greece was complete, and the Greeks continued marching north, freeing all Greek city-states from the Persian rule.

Battle of Aegospotami 405 BC

The battle of Aegospotami was a naval confrontation between Athens and Sparta that took place in 405 BC, and effectively ended the Peloponnesian War that had started in 431 BC. In this battle, the Spartan fleet under Lysander burned to the ground the Athenian navy, while the Athenians were out searching for supplies.

It is said that from a total of 180 ships, only 9 managed to escape. Since the Athenian empire depended on its navy in order to communicate with its overseas territories and import grain, this defeat was decisive, and so they decided to surrender.

Battle of Chaeronea 336 BC

Widely seen as one of the most decisive battles of the ancient world, the battle of Chaeronea confirmed the domination of the kingdom of Macedon over Greece. The young prince Alexander also participated in this battle, under the command of his father, King Phillip.

In this battle, the forces of Athens and Thebes were destroyed, ending once and for all any further resistance.

Eventually, Phillip managed to gain control of Greece, except Sparta, solidifying Greece as a united state under his rule. The League of Corinth was formed as result, with the king of Macedon as a guarantor, while Philip was voted as strategos for a Pan-Hellenic campaign against the Persian Empire.

Battle of Leuctra 371 BC

The battle of Leuctra was a military confrontation that took place in 371 BC between the Boeotian forces led by the Thebans, and a coalition led by the city of Sparta. It was fought near Leuctra, a village in Boeotia, amidst the post-Corinthian War conflict.

The Thebans managed to gain a decisive victory over Sparta and establish themselves as the most powerful city-state in Greece. The victory was a result of the genius battle tactics used by the Theban general Epaminondas, who managed to dismantle the Spartan phalanx and shatter the immense influence that Sparta have enjoyed over the Greek peninsula.