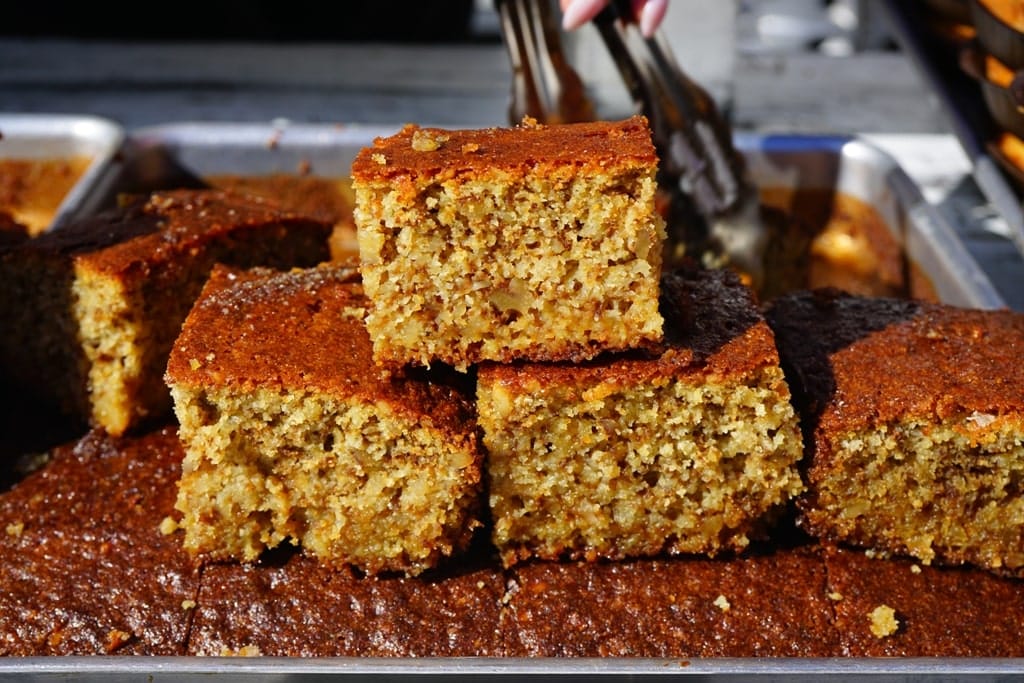 Greece is famous for the breathtaking natural beauty that makes it a bit of a paradise to vacation in. But that’s not all. Greece boasts fantastic cuisine, be it traditional or modern, which manages to be extremely tasty yet also extremely healthy. That’s because Greek cuisine ranks high in the list of ethnic cuisines of the Mediterranean diet, one of the healthiest diets in the world.

It comes as no surprise, therefore, that Greek cuisine has produced some amazing desserts, some of which are centuries-old recipes, and others are modern, standing on the shoulders of all those eons of delectable, sweet creation.

Some of these sweets, confections, cakes, and pastries have gained international fame! Here are the most famous Greek desserts which you must definitely try in their authentic version whenever you come to Greece!

This is one of the most renowned and oldest desserts of Greece. The word “galaktoboureko” means “milk wrap” or “milk pie” or “milk burek”. It is a phyllo pie with semolina-based custard milk filling, baked in a pan and doused in syrup. The best galaktoboureko keeps the phyllo crunchy and crisp while the filling is soft, sweet, and perfectly complemented by the syrup.

While there is some contention on whether the dessert originates in Greece or not, as there are many variations in this vein across the Middle East, from Turkey to Syria, called Laz böreği, the particular recipe is purely Greek, as the custard in it is not based on semolina.

It is believed to have originated in Greece sometime in the 1500s, taking the phyllo introduced from Turkey and using it to create something unique in the general vein of the ancient Greek koptoplakous which was roughly a cheese and nuts filled baklava-type thin-doughed sweet.

Another syrupy favorite, Kataifi is a Greek variation of a very popular middle eastern sweet. Kataifi is made of string pastry. String pastry is basically phyllo pastry that is shredded thin so it looks like it has innumerable strings like hair, intended to offer extra crispiness and a stunning appearance when baked.

Kataifi is, therefore, a string pastry wrap filled with nuts, sugar, spices, and hefty amounts of butter. Once baked it is doused in syrup which is often fragrant with more aromas or herbs.

Kataifi is often served with a special type of ice cream called dondurmas which is made from the milk of Greek water buffalo (yes, those exist!).

Dondurmas or kaimaki is a traditional Greek ice cream variation of the Turkish dondurma. It looks snow-white in appearance and has a very creamy, stringy yet silky texture when done right in the traditional way.

The original Greek dondurma or kaimaki was made with Greek water buffalo milk, mastic, salep, and heavy cream from buffalo milk. It’s this cream that is called ‘kaimaki’, so in essence, kaimaki dondurma is cream ice cream!

When later on Greek water buffalo milk became scarce or completely phased out during most of the 20th century, kaimaki (not dondurma anymore) was made on sheep milk or sheep and cow milk.

Nowadays though the Greek water buffalo farms have begun to re-emerge, so look out for the traditional, century-old kaimaki dondurma!

Baklava is a favorite syrupy dish across the middle east. Its origin is debated, and usually attributed vaguely to the Ottoman Empire, of which Greece was part for 400 years. There are theories that baklava was developed from the Ancient Greek plakous which means “flat and broad” which later developed into a Byzantine delicacy.

Baklava is made with several layers of phyllo pastry and filled with nuts (usually pistachios and walnuts or hazelnuts), spices, and sugar. To make good baklava, you need copious amounts of butter between each layer of phyllo to ensure it bakes super crunchy.

Baklava then is doused in syrup and sprinkled with more nuts on top.

Melomakarona are one of the two kings of Christmas cookies. They too come from ancient Greece, and their name means “honey well-wishing”. Originally in antiquity, they were used for funerals, but their use became a lot more festive towards the end of medieval times.

Melomakarona are oil-based, super fragrant cookies made with orange juice, spices, and nuts. They are then soaked in rich honey syrup and sprinkled with copious amounts of nuts. Melomakarona are tricky to make but stunningly tasty to eat and Greeks make them in vast amounts every Christmas season.

Kourabiedes complete the diptych of Christmas cookies. They are snowy white due to the ample amounts of powder sugar sprinkled over them and look like little snowballs. This recipe comes from Cappadocian Greeks who arrived in Northern Greece as refugees in the early 20th century, and it’s likely that the original recipe comes from Persia.

They are made on a basis of butter, sugar, and nuts. The proper kourabiedes are just the right amount of crumbly and flaky while remaining solid enough for you to bite without collapsing anywhere except in your mouth.

Diples are deep fried, large, curled sheets of dough which have then been doused in syrup and sprinkled with crushed nuts.

Originally from the Peloponnese, this treat was often reserved for festive occasions like weddings or baptisms. Nowadays you can find diples everywhere in Greece, though they tend to be in high demand during Christmas.

Proper diples will be crunchy or light and flaky with a thick syrup and abundant nuts. Don’t miss out!

Glyka tou koutaliou, or Spoon Sweets, was the Greek way to preserve produce that was either picked too early or was going to spoil before being consumed. Spoon sweets emerged the moment sugar was introduced in the Greek region by Arab merchants (Cyprus became a hub of sugar production around that time).

Fruit, some unripe vegetables, and even some flowers like roses, were boiled in sugar syrup and conserved in jars. The sweets were called spoon sweets because they were served on a teaspoon with a tall glass of water. They still are today and are considered a great accompaniment to your Greek coffee. You can also eat them with Greek yogurt.

Bougatsa is a staple of Northern Greece and especially the city of Thessaloniki, where the best bougatsa is said to be made. Bougatsa originates in Turkey and arrived in Greece through the Greek refugees of Asia Minor in the early 20th century.

Bougatsa is a pastry made of special bougatsa phyllo (it is not the traditional phyllo pastry) and filled with various fillings, sweet and savory. The most popular types of bougatsa are cream, cheese, ground meat, and spinach, but there are many more. Bougatsa is served chopped up and, if sweet, sprinkled with powder sugar and cinnamon. It’s the breakfast of choice for Northern Greeks!

Revani is an originally Turkish dessert that was passed over to Greece in medieval times. You can find revani everywhere in Greece, but it is said that the best and most original version is made in Northern Greece, in the city of Veroia.

Revani is a light spongy yellowy semolina-based cake that is sweetened and made fragrant with syrup. It is decorated on top with nuts and cut up in diamond shapes.

There are three types of halva in Greece. The one that is usually homemade is semolina-based and cooked in a pot, then dangerously (as it can become explosive) has syrup added in the golden-tinted semolina and nuts mix. But there is also the Macedonian style halva, which is sold in loaves and cut up in slices. That one is tahini-based and can be vanilla, chocolate, or honey flavored. Tahini is derived from sesame.

Lastly, there is also halvas from the city of Farsala, aptly called Halvas Farsalon, which is made with cornstarch, butter, almonds, and sugar.

Halvas is generally considered a lush dessert that is also proper for Lent as it is completely vegan (except for the Farsala variation or if you opt for honey-flavored in the Macedonian version).

Portokalopita, which means orange pie, is a very popular syrupy dessert. It is made of several layers of phyllo pastry, orange custard filling, and spices. It is then doused in orange-scented syrup and served plain, with ice cream, or yogurt.

Portokalopita is served as a treat for guests, so you may often have it served to you for free in restaurants, or as accompaniment for your coffee in various households.

Though it is called a pie, karydopita is actually a syrupy cake. The cake is made with walnuts and spices and can often have the addition of rum or cognac, brown sugar, and cinnamon. It is then doused in thick syrup that can be scented with cinnamon or vanilla or orange.

Like portokalopita, karydopita is considered a ‘house treat’ and will be offered to you with coffee, or free after your meal in some traditional restaurants.

Loukoumades are deep-fried doughnut balls that date as far back as medieval times. They are prevalent across the middle east. The Greek version comes in two variations: in one variation the doughnut balls are deep fried and the syrup is added afterward. Their shape may be circular or flattened with a hole in the middle. They are then topped with crushed nuts and cinnamon.

In the other variation, they are served deceptively dry-looking, because the syrup is all inside! They are a lot tinier than the other version so they can fit in your mouth, where they erupt in syrupy delight. These are coated with sesame.

Modern variations include filling them with chocolate or adding more toppings, and often they are served with ice cream.

Tsoureki is a Greek sweet bread that is traditionally made during Easter time but is available in shops around the year. Tsoureki is supposed to be opulent, which is why it was always reserved for holidays and especially for Easter in older times.

It is made with copious amounts of butter, milk, mastic, mahleb, eggs, and orange zest. The dough itself is quite difficult to make successfully without killing the yeast, so it is considered a traditional test of proficiency in the kitchen. Tsoureki loaves are traditionally braided and coated with an egg wash to make them shiny and darker.

The proper tsoureki is fluffy and light, while also managing a balance of dense deliciousness in a ‘stringy’ texture that is unique only to this type of sweet bread.

The best tsoureki is said to be the ‘politiko’, meaning “the one that comes from Constantinople” so don’t neglect to ask for that!

What is Grece’s National Dish?