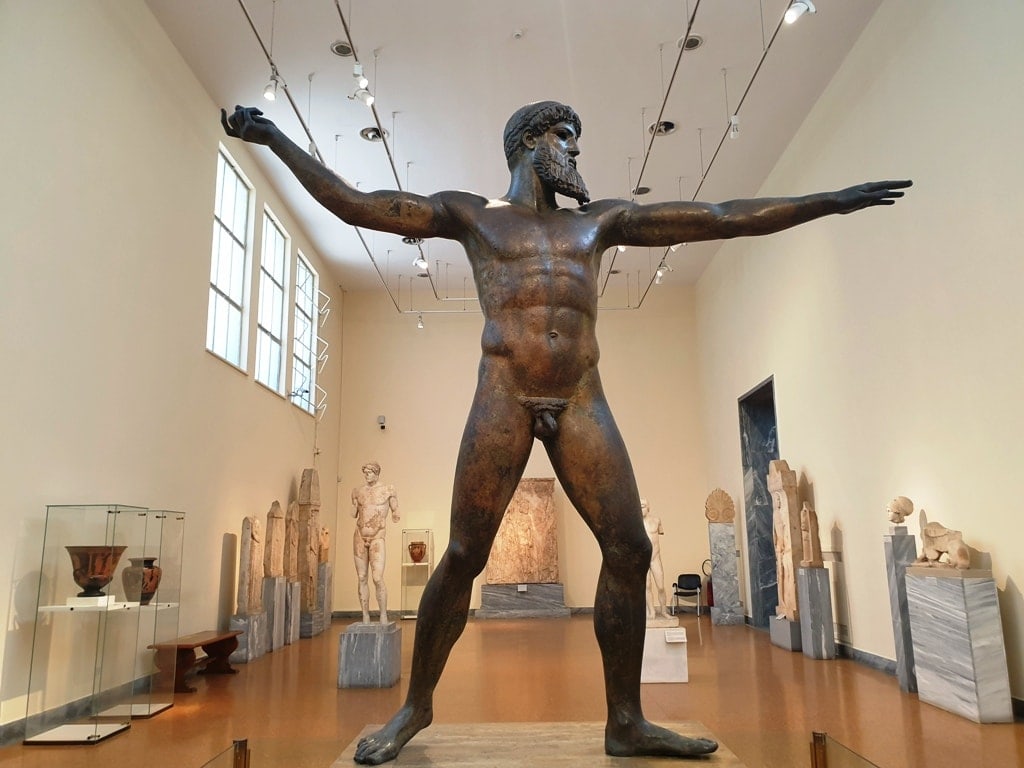 Ancient Greek sculpture is considered the main surviving type of fine ancient Greek art. Historians of art typically identify three main stages in monumental sculpture in bronze and stone: the Archaic (from about 650 to 480 BC), Classical (480–323 BC), and Hellenistic (323-28 BC). Greeks were inspired by the art of Near East civilizations and have given life to a form of art that has remained timeless, and which had earned the admiration of the Romans who extensively copied many Greek original works. This article presents the most important and well-known works of sculpture from Ancient Greece.

Most Famous Greek Statues and Where to See Them

Aphrodite of Milos is an ancient Greek statue and one of the most famous works of ancient Greek sculpture. It was created sometime between 130 and 100 BC and it is thought to be the work of Alexandros of Antioch.

It is a marble sculpture, standing at 203 cm high and it was discovered in 1820 on the island of Milos in the south-western Cyclades. The statue projects an air of mystery and impassivity, and it is characterized by its spiral composition and elongated body.

Aphrodite of Milos is currently on permanent display at the Louvre Museum in Paris.

The Winged Nike of Samothrace is a marble Hellenistic sculpture of Nike, the goddess of victory, created in the 2nd century BC by Pythocritos of Rhodes. The statue was found in 1863 in Adrianople, Turkey, and it was broken into several pieces. It represents the goddess Nike in the form of a winged woman standing on the prow of a ship, braced against the strong winds that blow through their garments.

This statue was an offering to the sanctuary of Samothrace, consecrated to the Cabeiri, the protectors of seafarers, and it is most likely associated with a victory of the Rhodians at Side against the fleet of Antiochus III the Great.

Nike of Samothraki is one of the masterpieces of Hellenistic sculpture and is on permanent display at the Louvre Museum in Paris.

The statue was certainly commissioned for the sanctuary at Olympia and it reflects the secular, worldly trend of the Late Classical epoch. The statue presents a peculiar characteristic: If one looks at the face from the left, is sorrowful, from the right it is smiling, and seen from the front it is calm. Therefore, if we move and look at Hermes’ face it seems not to be static.

The statue of Ermis is considered one of the great masterpieces of the Classical Age and is displayed at the Archaeological Museum of Olympia.

The Sacred Gate Kouros is a statue made of Naxian marble, unearthed in 2002 at the cemetery of Kerameikos, along with other artifacts, two marble lions, a sphinx, and fragments of marble pillars. It is believed to be the work of the Dipylon sculptor, and it is dated around 600 BC.

It stands 2.10 meters tall and is considered one of its kind, as it was preserved in a much better state than that of the earlier findings in Dipylon, the road surface that bisected Kerameikos. The face appears weak and triangular, with almond-shaped eyes.

The statue is exhibited at the National Archaeological Museum in Athens.

Moschophoros is a Greek statue of the Archaic period, dated around 560 BC. It was excavated in fragments in the Acropolis of Athens in 1864 and it is estimated to have originally measured 1.65 meters in height. The statue presents a man carrying a calf on his shoulders.

His thick beard and strong body structure depict strength and power, while he is also smiling, a feature that was unique and new in the art of the period. An inscription found on the statue suggests that the sponsor was a wealthy and prominent citizen of Attica who carried the calf as a sacrificial offering to the goddess Athena.

The statue of Moschophoros is now in the Acropolis Museum in Athens.

The Charioteer of Delphi, also known as Heniokhos, is one of the most recognized ancient Greek statues and is considered one of the finest examples of ancient bronze sculpture. The statue was found in 1896 at the Sanctuary of Apollo in Delphi and was most possibly created around 470 BC by a sculptor named Sotades.

The sculpture depicts the driver of the chariot race at the moment when he presents his chariot and horses to the spectators in recognition of his victory. It is considered a model of the Severe style of the early Classical period since the Charioteer has the typically fixed stare and heavy chin.

The Heniokhos is now in the Delphi Archaeological Museum.

The Artemision Bronze is an ancient Greek sculpture recovered from the Cape Artemision, in northern Euboea, in 1926. The sculptor remains unknown to this day, but we know that it was created in the early Classical period, around 460 BC. According to the experts, the statue either represents Zeus, the king of gods, or his brother Poseidon, the god of the sea.

In any case, the muscular man is completely nude and depicts the ideal male figure that the Greeks were interested in. It is considered a masterpiece of bronze sculpture thanks to its beauty, control, and strength.

The Artemision Bronze is a highlight in the National Archaeological Museum of Athens.

The Discobolus is a Greek statue of the early Classical period (about 460-450 BC) which represents a youthful athlete throwing a discus. The original bronze sculpture was created by Myron. However, the original work is lost and it is known only through numerous Roman copies.

The work is famous for its rhythmos, symmetry, and harmony, and is an exemplar of action statuary of the Classical period, and in extension, of both Severe and High Classical attributes.

A Caryatid is a sculpted female figure serving as an architectural support taking the place of a column or a pillar supporting an entablature or capital on the head. The name literally means ‘maidens of Karyai’, which was an ancient town in the Peloponnese. An atlas or telamon is considered the male version of a Caryatid.

The most famous example of this kind of artistic architectural design is the six Caryatides on the high stylobate of the south porch of the Erechtheion, on the Acropolis of Athens.

Because of the damage created by pollution, five of the original statues were stationed at the Acropolis Museum in 1978 and replaced with replicas.

One of the Caryatides is currently in the British Museum since the early 19th century.

The sculpture of the Dying Warrior is a pediment sculpture from the Temple of Aphaia, on the island of Aegina. It most possibly represents a fallen Trojan hero, probably Laomedon. It was created around 505-500 BC and is a prime example of Classical art. The warrior seems to be attempting to push himself off the ground with his shield. This work exerted a strong influence on Neoclassicism art and architecture in Munich, Germany.

It is currently on display in the Glyptothek of Munich.

The sculpture known as the Peplos Kore is dated around 530BC and was found on the Acropolis of Athens in 1886, near the Erechtheion. It is 1.18 meters tall, made of Parian marble. It takes its name from the peplos, which was a dress worn by women in Greece around the 5th century.

The peplos was fastened in the middle with a belt and on the shoulders with bronze pins. This is a prime example of Archaic Greek art, and it is also assumed that this is not a simple Kore, but the goddess Artemis, who would have been gripping arrows in her right hand, and a bow in her left.

The statue of Peplos Kore is now in the Acropolis Museum in Athens.

Aphrodite of Knidos is one of the well-known sculptures created by Praxiteles of Athens around the 4th century BC. It is considered one of the first life-sized representations of the nude female form in Greek history and art, thus presenting an alternative idea to male heroic nudity. Praxiteles’ Aphrodite is shown nude, reaching for a bath towel while covering her pubis, which, in turn, leaves her breasts exposed. However, Aphrodite of Knidos survives only in many Roman copies, as the original Greek sculpture no longer exists.

The Colossus of Rhodes was a monumental statue of the Greek sun-god Helios, erected in the city of Rhodes, on the Greek island of the same name, by Chares of Lindos in 280 BC. It is considered one of the Seven Wonders of the Ancient World, and it was constructed to celebrate its successful defense against Demetrius Poliorcetes, who had besieged it for a year with a large army and navy.

It was the tallest statue of the ancient world, standing at 33 meters high, and it was made of bronze, reinforced with iron, and weighted with stones. However, the statue was short-lived, as in 226 BC it collapsed during an earthquake.

The statue of Zeus at Olympia was a monumental seated figure of the god Zeus, made by the sculptor Phidias around 435 BC at the sanctuary of Olympia, and erected in the Temple of Zeus there. It measured about 12.4 meters tall and it was made of ivory plates and gold panels of wooden framework.

Zeus sat on a painted cedarwood throne ornamented with ebony, ivory, gold, and precious stones, while at his right hand he held a statue of Nike. The statue took eight years to complete and it is considered one of the Seven Wonders of the Ancient World. It was lost and destroyed during the 5th century BC; we know of its existence and appearance only from ancient Greek descriptions and representations on coins.

Athena Parthenos is a lost gigantic chryselephantine sculpture of the goddess Athena, made by the famous sculptor Phidias and housed in the Parthenon of Athens. It was the focal point of the temple and the most renowned cult image of the city of Athens. Phidias began his work around 447 BC and the statue was dedicated in 438 BC. It stood at 12 meters high and was made of gold and ivory.

The goddess stood erect, wearing a tunic, aegis, and helmet and holding a goddess of victory, a Nike, in her extended right hand and a spear in her left. The snake represents Erichtonios, a legendary king. On the statue base, the creation of Pandora was also shown. The statue disappeared from the historical record in Late Antiquity.