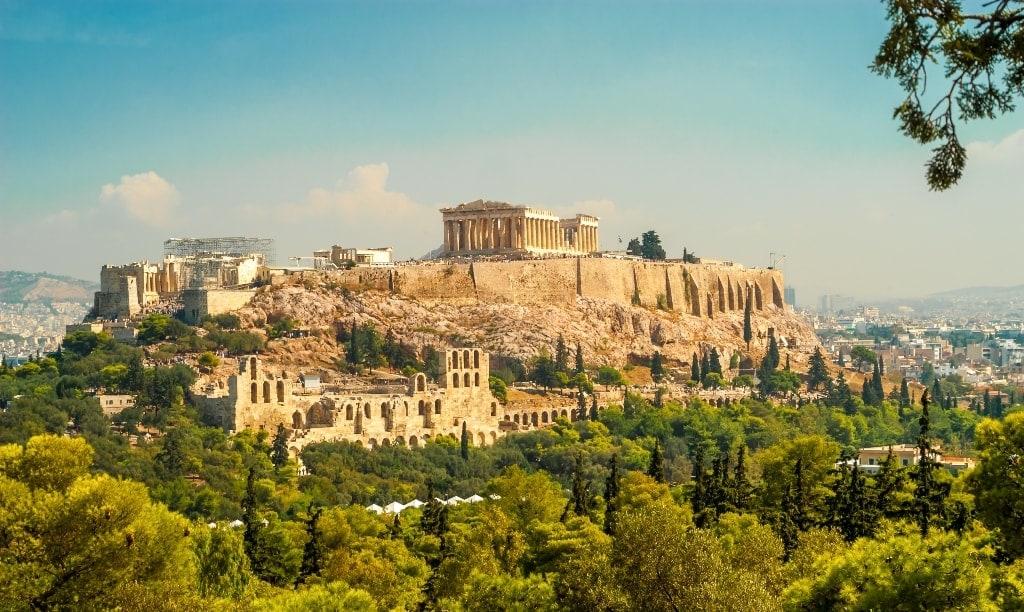 Greece is one of the most popular countries in the world for travelers. A nation of incredible history, excellent nature, and awe-inspiring scenery – it’s no wonder why 33 million people visit the country every year. This article will give you a guide to some of the major Landmarks of Greece.

It is a country with historic ruins in every corner, this article could have been far longer. But we have compressed it to give you the best landmarks in the country.

When people think of Greece, they will no doubt have visions of the Acropolis. It is hard to find a more historically significant landmark in the world than the Acropolis. It’s an icon of Greek history, the birthplace of democracy and the cradle of Western civilization. It’s an absolute must-see if you’re in the capital of Athens.

This ancient Greek citadel offers incredible views of the historic city. You can hike up to the top yourself and witness the continued brilliant scenery. Visitors marvel at the vast history of the Acropolis, which dates from 800 B.C. to 480 B.C.

There are numerous sites on the Acropolis, including the Parthenon, a temple dedicated to the Greek goddess Athena Parthenos. You can take a guided tour of the Acropolis or wander around yourself – it’s a great introduction to Greek civilization.

If you decide to head to the second biggest city in Greece, you must visit the White Tower of Thessaloniki. This majestic monument in Thessaloniki is one of the most famous landmarks of Greece.

Historians estimate builders constructed the monument in the 16th century, but there’s a lot of mystery surrounding its creation. However, the landmark has always been an integral part of Thessalonikis history; it was once a prison and a place of execution. If you do visit the museum inside the monument and learn about its history, be sure to check out the viewing platform from the top to enjoy phenomenal views.

You can also enjoy a stroll along the coast where you’ll find numerous green spaces surrounding the monument.

Located just a few kilometers from the town of Kalambaka, these monasteries are stunning and a hugely significant part of Greek cultural heritage. Meteora means suspended in the air, and that couldn’t be more apt for these beautiful monasteries that are 600 meters high. They offer amazing views of the local scenery and showcase a vast array of wildlife and scenery. You can visit these religious temples throughout the year – and meet the nuns who live here.

In 2021, you will struggle to find a more photographed place on the internet than Santorini. And some of the most significant landmarks of Greece are the blue-domed churches on this great island.

The famous blue-domed churches of Agios Spyridonas and Anastaseos are in Oia on the cliffs of Santorini. The churches’ views are incredible, visitors can see for miles and enjoy this Greek island’s unique beauty – you will get stunning views of the idyllic Aegean Sea.

One of the best ways to access these churches is by hiking up; it will allow you to visit numerous quaint shops and restaurants along the way. The island is full of these incredible blue-domed churches, and they remain some of the most famous landmarks of Greece.

Crete is the country’s biggest island and one of the most famous landmarks of Greece is Knossos Palace. If you want to see ancient Greek architecture in Crete, you will struggle to find a better option than this.

Archaeologists believe Knossos Palace dates back to 1,400 to 1,700 BC. Knossos Palace is referred to as the Palace of the Minoans, and it covers around 150,000 square feet. The site was discovered in the late 19th century and excavations were undertaken by English archaeologist Arthur Evans from 1900 to 1931. Further excavations were carried out between 1957 and 1970.

Despite archaeologists finding the ruins around a century ago, there are still many mysteries around the palace and its origins. The palace remains one of Greece’s best landmarks and is a must-see if you’re visiting the island.

If you want to see some of the best ancient ruins in Greece, you should head to Delphi. Situated just 185km from Athens, it’s possible to get one of the numerous day tours or even drive to these ruins from the capital.

Delphi is one of the most famous landmarks of Greece, and the site dates back to the 14th century BC. The Greeks believed Delphi was the center of the world, and it was here that they accumulated an astonishing amount of monuments and sculptures. The most famous is the Temple of Apollo which housed Pythia, the famous and respected oracle of Delphi whose advice was consulted before any major undertaking.

Ever since UNESCO made Delphi a World Heritage site in 1987, the site has been threatened by erosion, but the locals continue to do their utmost to preserve this historical wonder. Visitors will love the guided on-site tours offered by experts who have incredible knowledge of the ruins to enrich your experience.

Formerly one of the major centers of Ancient Greece, Mycenae remains a significant Greek temple. It is a mere 120km south-west of Athens and easily accessible by car or day tour. It remains hugely popular.

Archeologists believe the temple dates back to 3,500 years ago. They also think this temple was a military base for Southern Greece. The site is 900 feet above sea-level, and there are tremendous views from the top. Visitors can benefit from a variety of guided tours on offer, detailing the history and what the site meant for Greek civilization. Furthermore, there are an array of artifacts on show, including burial masks, golden relics, and jewelry giving a fascinating insight into Greek history.

Do you love watching the Olympic games? Most of the world does, and this site is where the first Olympic games took place – a key location for global history, not just Greek history. The site is on the western side of the Peloponnese and one of the must-see landmarks of Greece.

The Olympic games have become a global phenomenon, but the Ancient Greeks could never have foreseen this when they made these games for Zeus. Competitors from all around Ancient Greece took part in the Olympic Games, but the only prize was an olive branch to the competitors who won – how times have changed. Visitors will love the many guided tours, which offer a comprehensive insight into the ruins’ history.

Mykonos has become one of Europe’s most popular tourist destinations. Tens of thousands of tourists flock to the island during the summer months, and for a good reason – it’s stunning. Mykonos is an idyllic mixture of nightlife, nature, and Greek history.

When you first arrive in Mykonos, you will see the iconic Mykonos Windmills. These windmills have become a symbol of the islands and one of the famous landmarks of Greece. There are 16 windmills on Mykonos, and historians believe their construction began in the 16th century by the Venetians. However, construction of the windmills continued until the 20th century and locals used them to mill wheat.

If you’re looking for incredible ruins around Athens, it’s going to be hard to beat the Temple of Poseidon. These incredible Ancient Greek ruins have been a pillar of Greek culture ever since they were built in 444 BC. These ruins are one of the major landmarks of Greece.

Historians believe that Itkinos built the temple, alongside other buildings, such as the Temple of Hephaestus in Athens. Visitors will love the rich history of the temples, and you can find highly knowledgeable tour guides to give an in-depth insight into the history of these ruins and what they meant for the Ancient Greeks.

Of course, Greece is scorching hot during the summer, but that’s not an issue because there are stairs to a small beach which start from the temple. You can go for a refreshing swim after learning some of Greece’s fascinating history.

Rhodes is one of the most popular islands in Greece. It is home to incredible beaches, history, food, culture, and architecture, among many other things. But one of the best parts of the island is Rhodes Old Town, which remains one of the major landmarks of Greece.

Rhodes Old Town isn’t massive; in fact, it only has a population of 6,000. However, there is an incredible amount of things to do within this small town. Visitors will love the stunning medieval walls that surround the Old Town. These walls include seven gates: the Gate of the Naval Station, Gate of Agios Ioannis, Gate of the Apostle Paul, Gate of Amboise, Gate of the Port, Gate of the Ekaterini, and the Gate of Agios Athanasios.

You could spend days marveling at the incredible history of this Old Town, and if you want a refreshing swim or bite to eat, check out the fabulous beaches and restaurants nearby.

When people think of the beauty of Greece, they often think of Navagio Beach. It’s challenging to find a more picturesque beach on the planet. In the days of social media, it’s become almost impossible to escape pictures of Navagio Beach – the beach remains one of the major landmarks of Greece.

The beach is in the idyllic Greek paradise of Zakynthos. A small island, but one that has gorgeous scenery and endless adventure. Travelers often refer to Navagio Beach as the Shipwreck Beach due to the beach’s iconic sunken ship.

The ship’s story is fascinating and started when the coaster MV Panagiotis ran aground during terrible weather in 1980. The crew members managed to escape, but the boat remained on the beach – and inadvertently became an icon of the Mediterranean. Over 1,000 travel journalists have named Navagio Beach the ‘best beach in the world’. And it isn’t a surprise when you see how stunning it is.