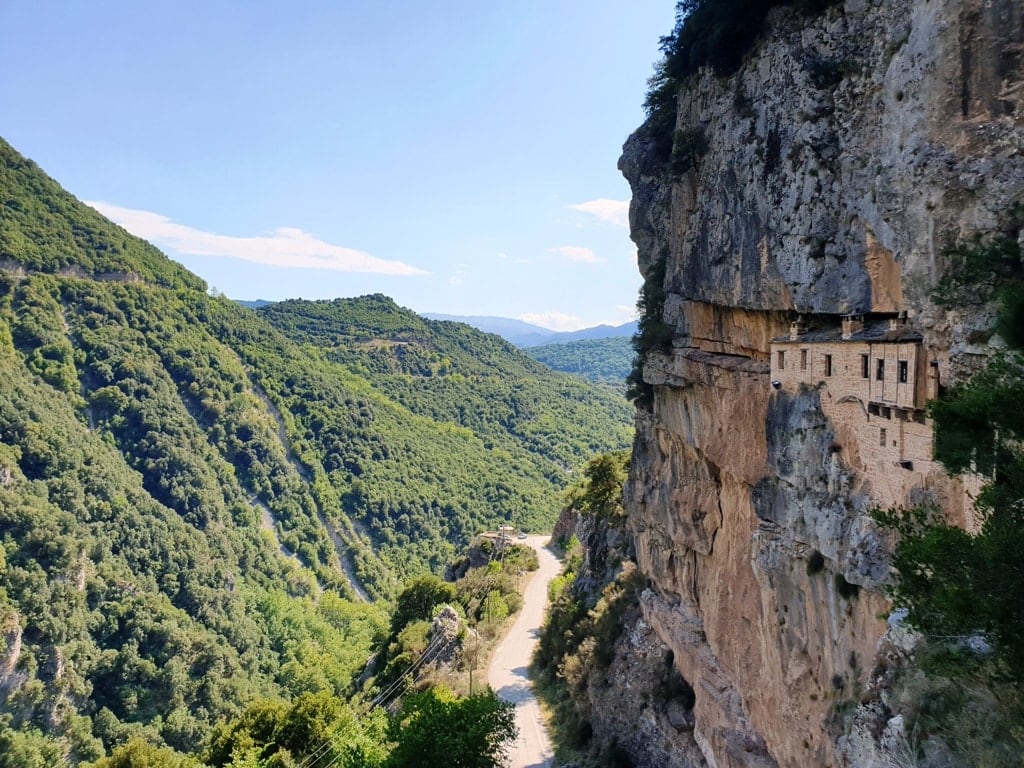 Greece is a famous destination for travelers eager to enjoy the sun, the endless coastlines, and the cosmopolitan islands of the country. And yet, Greece is a predominantly mountainous country, perfect for winter excursions and sightseeing of traditional landmarks of the mainland. Among the famous sites are the famous monasteries in Greece, built on the most imposing of spots, with breathtaking views and a pious, sacred atmosphere.

Here’s a list of the most famous monasteries of Greece:

10 Must – See Monasteries in Greece

In the region of Thessaly, you will find Meteora, arguably the most famous monasteries in Greece. This otherworldly destination is an actual wonder of nature whose huge steep rocks “flying mid-sky” have become the foundations upon which imposing monasteries are built.

The Meteora Monasteries have been built in a way that takes your breath away. Apart from marveling at the landscape and capturing extraordinary shots, you can visit each monastery and explore more of its history.

Among the most known is the Monastery of Great Meteoron, built by Agios Athanasios the Meteorite in the 14th century. It is the oldest and largest of these monasteries.

Visit the St. Nikolaos Anapafsas Monastery with its famous paintings by Theophanis Strelitzas Bathas and marvel at their beauty.

The most impressive Holy Trinity Monastery is a 14th-century marvel, also featured in the James Bond film “For your eyes only.” You can either climb the steps to the top or take the lift for easier access.

The Varlaam Monastery took its name from the hermit living there during the 14th century. It has a lot of interesting things to see, including a cellar with huge wooden barrels of old age.

In the small but beautiful monastery of Roussanou you can visit the church and explore the nun monastery. You can also buy local products such as honey produced by the nuns themselves.

The Monastery of St Stephen is also a nunnery, and it is more easily accessible via a bridge.

On the wonderful island of Patmos, you can find the Monastery of Saint John the Theologian. It is a Greek Orthodox Monastery, located in the Chora of Patmos. It was actually founded as back as 1088, and hence, it is protected as a World Heritage Site by UNESCO.

Standing imposingly upon the hill of Chora, this monastery looks like a castle, its wall 15 meters in height, fortified against attacks from the outside. For this same reason, above the entrance arch, you will notice a hole, where they used to pour hot water or oil from the attacking pirates trying to sack the monastery and loot its belongings.

Nowadays, you can find finely preserved murals, a well filled with holy water, and the bricolage of old and new arrangements.

In the wonderful region of Boeotia lies the small town of Distomo, near which you can find the Monastery of Hosios Loukas. Thanks to its iconic Middle Byzantine architecture and rich history, it is also preserved as a World Heritage Site by UNESCO.

The monastery was built by Loukas the monk, who was also buried beneath the monastery around 953 AD. The most stunning part of this imposing monastery is the gold mosaic of Saint Luke on the entrance wall. Inside, you will find more mosaics and paintings of saints.

Surrounding the monastery, you will find valleys of greenery and flowers, providing a serenity that’s hard to find nowadays.

Located just 10 km outside of the picturesque town of Kalavryta, the Holy Monastery of Megalo Spilaio is a stunning place and a sacred place of worship, visited by many for its unique architecture and piety.

The monastery was originally built around 362 A.D. when a local girl spotted a valuable icon of the Virgin Mary inside a cave. It was believed that the icon was painted by Apostle Luke himself.

Built around this cave, this monastery is fortified, with eight distinct floors of relatively modern architecture compared to the rest. The reason behind this is a long past of conflict and persecution. The monastery suffered the destruction by iconomachs and then many centuries later, a fatal attack and fire by the Nazi troops who looted it.

Today, it is a historic site, worth visiting, for the 17th century Church with many remarkable frescoes, mosaic floors, and its door made of bronze. Inside the monastery, you will also find a museum with many artifacts for visitors to explore its rich and bloodstained past.

Another one that ticks the list of the most famous monasteries of Greece is the breathtaking monastery of Panagia Hozoviotissa on the island of Amorgos.

The island of endless blue, Amorgos, is full of traditional Cycladic elements, white-washed dwellings, and Christian history. One site that features all these elements is this monastery, dedicated to the grace of the Virgin Mary (Panagia.)

Originally built during the 11th century by Alexius Comnenus I, this structure is built on a cliff, as if it is engraved there, emerging from the rocks, overlooking the stunning Aegean Sea.

Among the many treasures, you can find there are 15th century Panagia Portaitissa, Theotokio, and Gennadio’s prayer from 1619. The real treasure is the unmatched beauty of the view from each small window, all over the labyrinths and the staircases of this monastery.

The sacredness of the place is apparent and ever-flowing, and the distinctiveness of its architecture will move even the less pious visitors. The hospitality of the monks who offer honey, raki, and liqueur only adds to its warmth.

Tip: There is a dress code for the visitors, including trousers for men and long skirts for women.

The historic monastery of Arkadi near Rethymno of Crete is a renowned site of the island, related to the Cretan Revolution of 1866 when Cretans revolted against the Turkish (Ottoman) occupation.

This elegantly built monastery, created originally around the 12th century by a monk, who was said to be Arkadian, hence the name. Another explanation, however, wants it to be named after the emperor of Byzantium, Arcadius. It has a church inside dedicated to Saint Constantine and Helen and the Metamorphosis of the Saviour, as it is said.

The bloody history of this iconic monastery is from 1866 when it was under siege by Turkish soldiers, who were pushing to get into it. The Cretan monks, refusing to surrender or be besieged, set fire in a room full of gunpowder, killing themselves and a big part of the Turkish soldiers, all in a heroic act of self-sacrifice.

Nowadays, you can visit it and learn all about the history, or simply marvel at its Renaissance-inspired fortress-like architecture. It is filled with beautiful treasures of saints’ icons, as well as an interesting museum collection of post-Byzantine ecclesiastical art, and a souvenir shop. Outside, you can find the memorial dedicated to the lost men of the historic siege of 1866.

The Athonite Monasteries, also known as Mount Athos Monasteries, are sacred monasteries situated at Agion Oros (The Holy Mountain), an autonomous polity where monks live, on the third “leg” of the Chalkidiki peninsula of Northern Greece.

This ascetic community of around 2,000 monks guards the rich treasures of the Christian Orthodox history, found in the Athonite monasteries. Such valuable artifacts include; rare old books and ancient documents, Christian icons and artworks, and mosaics from old times. It is therefore regarded as a World Heritage Site by UNESCO and protected as such.

There are 20 Monasteries in Mount Athos, entrance to which is prohibited to women of any age, due to religious reasons.

In addition, if you are an explorer looking for hidden gems, head towards the Mylopotamos Winery which is a vineyard 20-minute away from Iviron Monastery. If you’re into hiking, you can climb up the mountaintop (Mt. Athos at 2,033m) by following various hiking trails or roads from Great Lavra Monastery. For some history discovery, you can marvel at the recently-restored Zygos Monastery from the 10th century!

In the western suburbs of Athens, in the region of Chaidari, lies another famous monastery of Greece, also preserved as a World Heritage Site by UNESCO. Originally built during the 6th century, the monastery now only has buildings from the 11th century, due to destructions and restorations.

Built like a dome-shaped traditional Orthodox Church, the monastery has a very beautiful secret to amaze its visitors. On the inside, you will find mosaics covering it from the ceiling to the floor. The whole monastery represents the universe; the mosaics on the dome are depictions of heaven, and those on the floor are depictions of Earth.

The whole monastery was built on the ruins of the Temple of Apollo Daphnaios, which was invaded and destroyed by the Goths in 395 A.D. The beautiful Ionic-style columns remained, however, until Lord Elgin’s visit during the 19th century.

Apart from its wonderful Byzantine architecture and impressive mosaics, you can find the 9th-century basilica in the yard of the monastery cemetery.

The awe-inspiring monastery of Kipina is a hidden gem of the stunning region of Epirus. In the way to the village of Kalarites in Tzoumerka, you can marvel at a monastery literally wedged in the rocks. It is built in such a way that you can hardly notice it between the rocks of almost the same color. That’s why it was also used as a hideout for Greeks during the Ottoman Occupation.

This impressive structure was originally built during the 13th century, and it is located right above the Kalarrytikos river, on a steep slope. Inside the monastery, you can find a temple with a wooden door, a passageway to the interior cave, and shelter.

The frescoes and the artifacts are from the 17th century. You can also find a sitting area on the ground floor.

In the village of Stemnitsa near Tripoli, you can find the last of the famous monasteries in Greece mentioned in this article. Moni Timiou Prodromou also known as St. John the Baptist’s Monastery, is sometimes called Megalo Spilaio of Arkadia (the big cave).

It is built into a rock overlooking the east bank of River Lousios in the gorge. You can hike there all the way from Dimitsana, or simply park your car near the Church of Metamorphosis of the Saviour. This trail is also a part of the Menalon Hiking trail, one of the most known in Greece.

The monastery has a long history of restoration and siege, but in 1748, it was restored with a plane tree and a fountain. Inside, you can marvel at the old monastery gate, still the same, marked by the bullets of the enemies, and many paintings from the 16th century.

There is also a watermill near the Lousios river, and a pedestrian bridge to cross and marvel at virgin nature and rich vegetation.