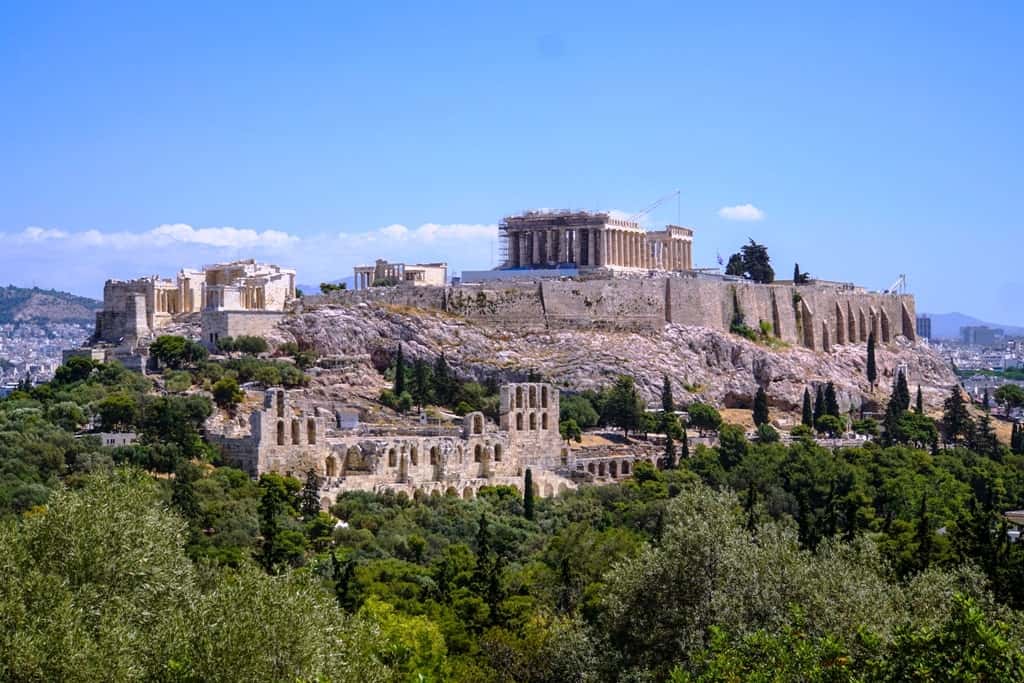 A guide to Filopappos Hill

South-west of the Acropolis stands a small hill that is part of the larger green wooded area known as ‘Pnyx’ or Mouson Hill. Filopappos Hill is a popular place to walk for Athenians. If you climb to the top of the hill (147 metres) you will soon see why, as it offers a fantastic view of the Acropolis, the city of Athens and the twinkling blue Aegean Sea beyond. If you plan to reach the crest of the hill at sunset it is almost magical…

In 114 AD a monument was erected on the top of the hill, that was dedicated to Prince Gaius Julius Antiochus of Commagene – a small Greco-Iranian kingdom. When the Prince was exiled, he took refuge in Athens and become an Athenian citizen. He had held both civil and religious positions in the city, was a great benefactor and highly regarded by everyone. His nickname was ‘Filopappos’ meaning’ the favourite grandson of the grandfather’. His grandfather was the last King of Commagene.

When Filopappos died, the monument was built on the hilltop in his honour using marble brought from from Mts Penteli and Imittos. The monument is 12 metres high and decorated with two intricately carved marble portraits. The top one portrays Prince Gaius sitting on a throne of office and the lower one depicts him in his chariot.

There is a pathway leading from the monument that was constructed in the 1950s using marble blocks The pathway Filopappos Hill with Pnyx Hill, which in ancient times was a popular meeting place for public discussion. Pnyx Hill is regarded as the birthplace of modern democracy.  For the first time, male citizens of Athens were considered as equal and they would regularly gather on the hilltop for important meetings to discuss political issues.

As you begin to follow the pathway from the top, there is a side path that leads to the Shrine of the Muses. Situated just below the crest of the hill and hewn in the rock, the shrine was dedicated to the goddesses of the creative arts. It is not unusual to visit the shrine and see an offering placed there by a hopeful writer, musician or artist.

Further along the footpath is a small stone cell with strong iron gates and according to local folklore, this is where Socrates, the Greek philosopher was imprisoned and died. The whole hilltop was inhabited since prehistoric times and some ancient remains of fortifications can still be seen.

As you continue along the path towards the bottom of the hill and just 250 metres from the road, there is the lovely little 16th century of  Ayios Dimitrios Loumbardiaris. The courtyard and gate of the church are Japanese in style and were designed by the architect Dimitrios Pikionis. The church has a thick wooden roof and marble floors inside, plus a large fresco depicting Ayios Demetrios on horseback (1732).

The heady smell of incense hangs in the air inside the church. It is said that the church was the site of a miracle in 1648. Local folklore tells that the Acropolis was in the hands of the Turks and they planned to fire a cannon on the people attending the church. As the gunner took aim, he was killed by a sudden bolt of lightning. The name of the church – Loumbardiaris means’ of the cannon’ and refers to this tale.

On the western side of the hill stands  the Filopappos Theatre (also known as the Dora Stratou Theatre) where dance performances are given in the summer months.