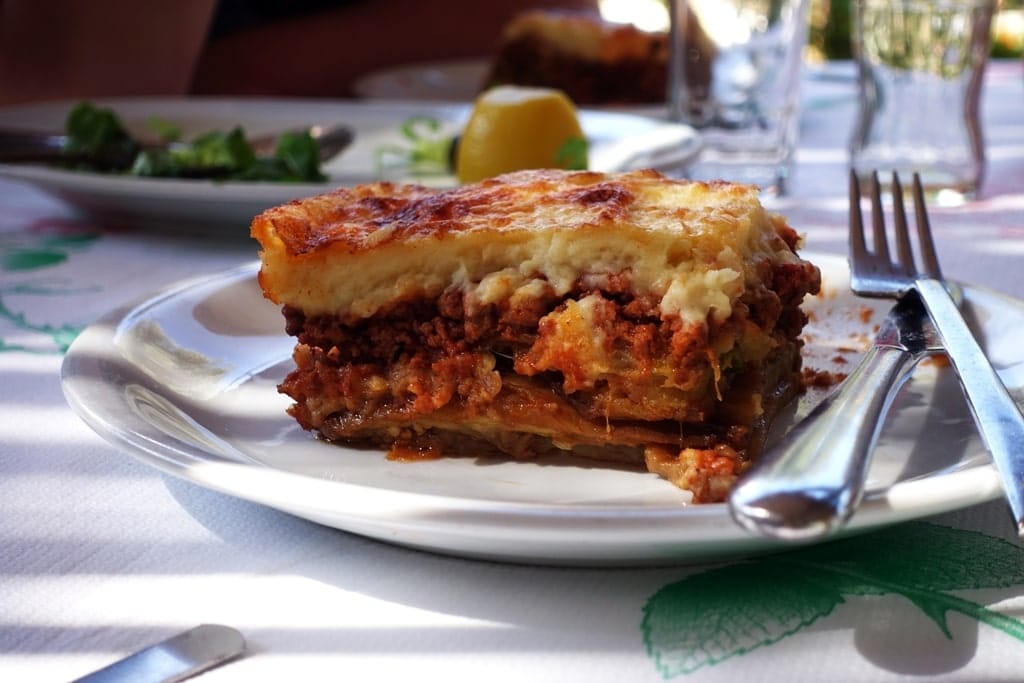 Greece is a gem of the Mediterranean. Everywhere you go there is a little touch of paradise, be it during the summer or the winter. That would be enough, but Greece’s graces don’t stop there! The food is also mind-blowingly excellent and very healthy, so you can indulge with relative impunity. Greek cuisine is part of the renowned Mediterranean diet, known for being one of the healthiest diets in the world.

When faced with this culinary opulence that spans several centuries, if not millennia, it’s understandable that there are several Greek dishes that are extremely popular with the locals.

But which one is popular enough to qualify as Greece’s national dish? Which dish is the king that rises above all others in popularity across the country to warrant the rank of “national dish”?

There are two opinions on the matter, depending on who you ask.

By far the most prevalent answer to what Greece’s national dish is is the Moussaka. But quite a few will also name Fassolada, either as a contender or a close second!

There are even people that nominate as many as six different dishes for national Greek dishes, but the two we’re mentioning here are the most prevalent ones that are not tied to specific holidays or traditions.

Both of these dishes are extremely tasty, with combinations of ingredients that can’t fail. Here is a brief description of each:

What is the National Dish of Greece?

Moussaka is a dish cooked with minced meat, vegetables (usually eggplant or zucchini), and bechamel. The general family of moussaka dishes is very popular in the Balkan area and the middle east in general. However, each country’s moussaka is a completely different experience, with different ingredients complementing the minced meat and vegetables.

In Greece, the Greek version of moussaka was introduced in the early 20th century in the form we know of it today by the renowned Greek chef Tselementes, with instant popularity ever since.

The Moussaka dish is pretty much ubiquitous in every Greek tavern you visit. However, Greeks have argued over what the best way to cook a moussaka is since forever and aren’t likely to stop.

The truth is that there are two ways to cook moussaka, oven moussaka, and casserole moussaka. Both of them are delicious, and both of them are at their best when you have them homemade as a guest in a Greek household!

Oven moussaka is made in layers in a pan. Eggplant slices are fried in oil and then layered at the bottom of the pan, with minced meat cooked in tomato sauce. Layer upon layer, with some ground cheese in between, the moussaka is built. At the top, rich bechamel with cheese tops it all off.

The moussaka is then baked in the oven until the bechamel becomes golden and all the juices are cooked. Serving a piece of moussaka is being presented with a delicious cube of texture, taste, and fragrant experiences all balanced in a single forkful.

Casserole moussaka, however, has no bechamel, and managed not to need it! Casserole moussaka is cooked in a pot. Often beginning with sauteing onions in oil and tomatoes up to the fried point, then the minced meat is added until it cooks with tomato. Finally, the vegetables are added to cook all the way within the juices and aromas of the cooking minced meat. This moussaka is rich in oil, soft and textured, full of nutrients and taste. Accompany this moussaka with feta cheese and a good glass of wine!

If you are looking to taste this amazing dish in restaurants, the rule of thumb is how touristy the place is: the more touristy, the less authentic moussaka will be. If the moussaka has potatoes in it, then it’s not the authentic traditional version.

If the taverna is frequented by Greeks and often tends to not have a menu or an all-Greek menu, chances are it is a family business using recipes handed down from their ancestors, so you are most likely to have good moussaka there.

In the taverns, the oven moussaka with the bechamel top layer is the one most likely to be served. The casserole one is a variation found in the kitchens of Greek homes, so cherish the experience if you are ever invited and have a chance to taste it!

You might want to check out: Vegan and Vegetarian dishes to try in Greece.

Fassolada is considered a dish tied with the Greek culture and psyche, as beans were said to be “the poor man’s meat”: because of the extremely nurturing elements of the dish, as well as its capacity to feed more people with relatively less, fassolada was a staple of the Greek diet during dire times, and for the less privileged classes. Fassolada is rich in protein, iron, and vitamin B. The rich, virgin olive oil is also full of beneficial nutrients, another bonus to the amazing taste it offers.

The perfect fassolada soup is thick, served hot, and often accompanied by freshly baked traditional bread that people often dip in it. It’s not uncommon for feta cheese chunks to be dropped in and allowed to slightly melt to a marshmallow texture.

Fassolada is tasty, full of texture and aromas, and very filling. It will give you a boost of energy to get on with your day!

To make the perfect fassolada you need white, relatively fresh beans that will boil relatively quickly and achieve the desired texture. Like in many such dishes, you parboil the beans and set them aside. While the beans wait, you sauté chopped onions, carrots, and celery in olive oil. When they are almost to the point of frying, you add the tomato and stir while the ingredients cook.

Then add the beans with boiling water to the mix, and let the soup cook until the beans become tender. Add the rest of the olive oil towards the end and cook until the soup becomes creamy and thick. You’re ready to serve and taste the dish that kept Greeks going through hard times and good times!