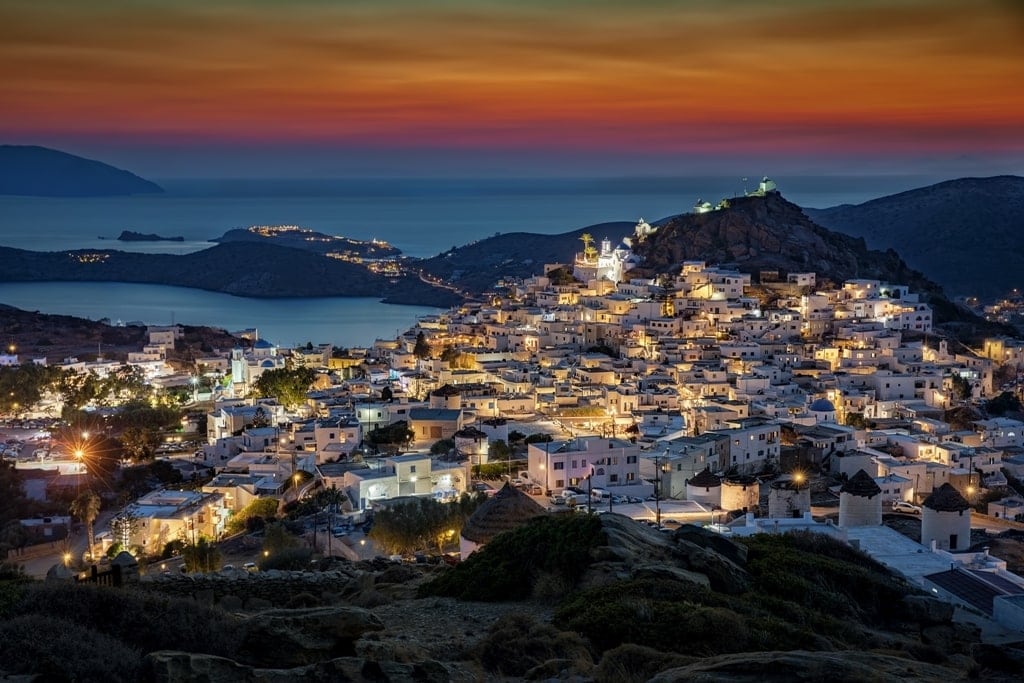 Greece may be known for its whitewashed hilltop villages, historic monuments, and jaw-dropping natural sights. However, if you’ve seen the first Inbetweeners movie, set in Malia, you’ll know all about Greek party islands! Spend your day on the beach, before a quick nap and dinner, then it’s on to drink, dance, and be merry. Greece’s bars and clubs are still going well beyond sunrise over the Aegean Sea, to the soundtrack of banging DJ sets and revelers having the time of their lives.

With that in mind, in this post, we’ll take a look at the best party islands in Greece. Whether you’re looking for epic nightclubs or boozy afternoon boat parties, there’s sure to be one that suits your travel style.

Known as the Ibiza of Greece, this island in the Cyclades is probably the country’s most famous spot for nightlife. It’s impossible to write a list of the best Greek islands for partying without the cool and cosmopolitan Mykonos!

Swap the laidback beaches and whitewashed houses you’ve been exploring during the day for a number of famous bars and clubs as night falls. You won’t have to go far to find a DJ set, a beach bar, or even an A-list celebrity.

Don’t miss one of Europe’s most famous clubs while you’re here. Paradise Club has three stages, a swimming pool, and the best party nights in the Aegean. Fancy something a little quieter? There are endless bars around the island that serve everything from classy cocktails such as frozen margaritas and daiquiris to a local favorite – Mythos beer.

To cap it all off, Mykonos is extremely welcoming to LGBT travellers, and there are dedicated nightclubs and even the XLSIOR dance festival!

Another island in the Cyclades, Ios is found between Naxos and Santorini. During the day, the island has a laid-back vibe, but don’t be fooled – Ios knows how to party once the sun goes down.

There are two main areas for partying – one of which is Mylopotas, home to the Far Out Beach Club. Stay here during the day to swim, sunbathe, and sleep before embracing its alter ego at night. The other is Chora, an island with an endless supply of bars and clubs to choose from. Don’t miss Scorpion Night Club and Disco 69!

July visitors can make the most of full moon beach parties, much like the ones made famous by party islands in Thailand.

Remaining in the Cyclades, Paros is northwest of Ios and directly west of Naxos. The main nightlife here is between the villages of Naoussa and Parikia, where you’ll find a whole host of bars and nightclubs where you can dance the night away. Clubs to look out for include the Saloon Door and Galea. No matter where you go, there’s every type of music from techno to classic rock.

Paros is a popular spot for university students, especially during the summer months. It’s known to be one of the best Greek islands for parties for young people.

So if you’re looking for a wild weekend away from Athens, this is the place to go. It’s just three hours away by ferry!

Rhodes is the fourth largest island in Greece, and this Dodecanese paradise has a lot to offer. While you can soak up the history in Rhodes town, admire the Acropolis at Lindos, and wander through the Valley of the Butterflies during the day, it’s Faliraki you want for nightlife.

Throughout the year, the resort town has clubs, bars, and booze cruises where you can drink until you drop. The town’s beach is 5km long, and there is a smattering of beach bars and restaurants just off its golden sands.

Faliraki is also home to the largest water park in Europe, and it’s the perfect place to vanquish your hangover.

If Faliraki isn’t your scene, there are some great bars, clubs, and restaurants in Rhodes town too. The small town of Pefkos on the east of the island is popular among British ex-pats and has some more low-key nightlife too. Pub quizzes are aplenty!

Zante (also known as Zakynthos) is one of the Ionian Islands, and it has a number of resorts that are famed for their nightlife. A popular package holiday destination, the three main nightlife hubs are Laganas, Agassi, and Tsilivi.

Tsilivi is in the northeast of the island near Zakynthos Town (the island’s main town), and there is a range of clubs and bars here to satisfy all tastes. However, to find the wildest and most hedonistic nightlife in Zante, it’s Laganas you need to head for. Located in the southwest of the island, its legendary strip welcomes tens of thousands of revelers every summer.

Boat parties and booze cruises can be found at both destinations!

When you want to get away from the bright lights and the noise, there are plenty of great spots on Zante where you can recover from your hangover, such as Navagio Beach.

Another of Greece’s larger islands, there is no shortage of spots in Corfu where you can enjoy the nightlife. It’s one of the most popular Greek islands in general, with many people choosing to have at least one night out in Kavos, Ipsos, Kontokali, and Sidari to name a few.

There’s a big variety of nightlife here too. You can hit the strips of towns like Kavos and Ipsos for your regular drinking and dancing, and sometimes there’ll even be paint or powder parties. There are even a couple of open-air clubs!

For something totally unique, you could even hit up Corfu Zoo which has its own party night. Although we’re not sure how the animals feel about that!

When you’re done with partying, Corfu is large enough to find a relaxing beach or challenging hike for a change of scenery.

Another of the Dodecanese Islands, Kos is a popular option for those visiting Greece for its nightlife. Part of this is due to the huge range of tastes and budgets that the venues here cater to. On the same night, you can sip a cocktail in a jazz bar, nail a Spice Girls song at a cheesy karaoke night, and dance to hardcore EDM.

Kos Town boasts two streets of clubs and bars in the city center. However, there’s more. The resorts of Kardamena, Tigahi, and Agios Stefanos are great places for a night out dotted around the island. During the summer, you can expect beach raves and DJ sets on the sand!

Last but by no means least is the charming island of Skiathos, one of the Sporades. Mamma Mia fans may recognize it as it featured in the blockbuster movie! While it’s unlikely you’ll come across Meryl Streep singing Abba classics, you will be able to find a bar where you can ruin some songs of your own. Especially in the main town of Chora!

Head for Bar Street, which unsurprisingly is packed with bars, or Papadiamantis Street. Most clubs don’t open until midnight, so make sure to have a nap in the afternoon or evening so you can keep going long until the next day!