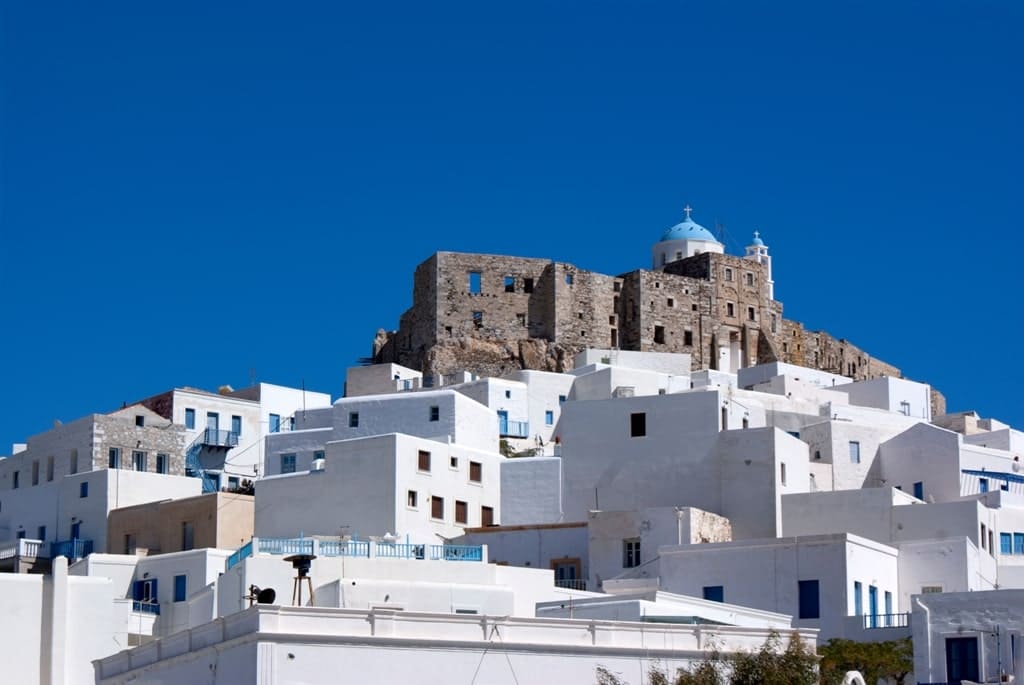 One of the most iconic images associated with Greece, apart from the Parthenon glistening under the Athenian sun, is that of the whitewashed, bright houses with blue windows or church domes. Huddled together like sheep at the slopes of dry, brown, sunbaked hills overlooking the azure waters of the Aegean Sea, the houses in the Cyclades are characterized by their tradition and minimalism.

And it is mostly the Aegean, because the white and blue combination is a trademark of Cycladic architecture.

But why are the houses in the Cyclades painted that bright white, why is there so much blue in their highlights, from the shutters and the doors to the domes of the churches? Contrary to a popular explanation, the color scheme is not a homage to the Greek flag, which also has blue and white colors.

The White Houses of Greece and the Greek Islands

Why the houses in Greece are white?

Anyone who has experienced the Greek sun knows that it is relentless, as is the heat of the summer. Especially in places where there is very little shade, the temperatures can climb due to the dryness that is coupled with the heat.

The Cyclades have very little vegetation during the summer months, and they are literally scorched by the sun throughout the Greek summer. Staying inside the house can be torturous if a dark house’s paint attracts and absorbs the relentless sunlight more than it must.

The solution was to paint the houses a bright white that reflects all colors, and thus repulses the sunlight’s heat as much as possible. In addition, white paint was easy and cheap to make during a time where poverty was harsh and wide, especially among the islanders in the Cyclades: you can make your own whitewash by mixing lime, water, and salt.

Further solidifying the style was the 1938 cholera pandemic that hit, making the dictator Metaxas pass a law ordering everyone in the islands to paint their houses white with the limestone whitewash to get the disease under control. This was done because the limestone was considered to have antibacterial and disinfectant qualities.

Why the houses in Greece have blue?

Back in the day, housewives would use a cleaner called “loulaki” which had a distinctive blue color and came in the form of powder. It was widely and cheaply available. Mixing that powder in the limestone whitewash makes the trademark blue which we’re all used to seeing. As a result, blue paint became cheap and easy to make just like the whitewash itself.

Islanders painted their houses blue mainly for that reason, until, during the 1967 Junta, a law mandated that they paint the houses white and blue in honor of the Greek flag. That’s when the wide uniformity of the Cycladic houses was solidified.

After the fall of the Junta, the picturesque white and blue became an increasingly popular tourist attraction, and islanders kept up the practice for that purpose even if the law mandating it was abolished.

Where to find white houses in Greece?

It isn’t chance that Santorini island is one of the most popular destinations for tourists around the world. The entire island is unique and beautiful, made of volcanic activity and commemorated in the writings of the ancient Greeks, as well as geology itself, for it.

One of the most beautiful villages in Santorini (and that’s saying a lot!) is Oia. It is where you will find the most Instagram worthy vistas and backdrops of white houses and blue domes. Though there are houses with other off-white, pastel hues to enjoy, as well as the famous cave houses with the blue domes, in Oia you will find the textbook approach to Cycladic architecture.

If you crave Santorini but without the throngs of people, you want to go to Milos island. Flowers line the streets and narrow walkways in Milos, splashes of vibrant colors against the bright white canvas of Milos’ whitewashed houses.

And the most beautiful vistas to enjoy are to be found in the town of Plaka. The town is gorgeous and historic, featuring the Kastro quarter within the old Venetian castle looming over the village at the top of the hill and merging with the white houses. Enjoy the beaches and the seaside of Milos, in a unique blend of folklore and tradition with heritage and modernity.

Mykonos is also highly popular for tourists around the world. Known for its cosmopolitan style, it combines tradition and folklore for a wonderful experience. The main town of Mykonos is also its most iconic, an ideal place to see whitewashed houses. Not only will you find the traditional white color, but you will also enjoy the splashes of vibrant colors from the various shutters and wooden balconies overlooking the waters, especially in the “Little Venice” area of Mykonos’ Chora.

Paros is also very popular as an island, but considerably less touristy than the superstar islands of Santorini and Mykonos. If you visit Paros, the most beautiful white house village is Naoussa, in Paros’ north. It is so picturesque, with a backdrop of turquoise waters under the bright sun, that Naoussa is already dubbed “the new Mykonos”. Enjoy Naoussa’s sandy beaches and relaxed, hospitable environment.

Small Folegandros is a beautiful island in the Cyclades that up until later was under the radar regarding tourism. It is now being discovered for its beauty and unique profile of quiet and isolation combined with relaxation and hospitality. Folegandros’ main town (Chora) is a gem of white houses clustered around the port. Tradition and modernity merge seamlessly, with picturesque winding streets that invite you to walk and enjoy the overture of crawling flowery plants in large clay urns.

Koufonisia has a main town that is made for postcards. Its whitewashed houses sit brightly overlooking exotic-blue waters, like out of a fairytale. Enjoy the white gold sandy beaches and the light blue, crystal clear waters of the sea in one of the most beautiful island in the “Little Cyclades” cluster of the Cyclades.

Away from the Cyclades, there are still white house villages to be found! On the island of Rhodes, in the Dodecanese, you will find Lindos. Lindos is one of the exceptions of Rhodes’ typical medieval architecture, with sugar cube houses scattered among the green hills near the lapping blue waters of the Aegean. The houses meander, fanning out around the village’s acropolis, looking out towards the sea. You will have the chance to enjoy not only the gorgeous beaches but also beautiful ancient ruins.

In Greece’s biggest and most beautiful island, Crete, you will see mostly a different, Cretan architecture that is beautiful in its own right. But because of Crete’s size and diversity, you can also discover white house villages, and Loutro is one of the prettiest! You can only reach it by boat from the main town (Chora) of the area of Sfakia. Loutro is an ideal destination if you are looking for calm, quiet, relaxing vacations surrounded by the beauty of azure waters, whitewashed houses, and the famed Cretan hospitality.

If you haven’t scheduled a tour to the islands but still would like to experience and enjoy a white house village, Athens has got you covered! In the heart of Athens, in a very unique part of Plaka, the historical center, you will find the Anafiotika neighborhood.

Anafiotika’s houses are built in the iconic Cycladic style of whitewashed houses, clustered amphitheatrically right underneath the sacred rock of the Acropolis. This unique neighborhood that stands out from the rest of the typical neoclassical and revolutionary architectural style of the area of Plaka, is the result of the building of the royal palace (currently the Greek parliament house) in 1843 by workers that came from the Cycladic islands of Anafi and Naxos. These workers built their own houses to stay while they worked on the project in the style of their homes back in the Cyclades.

As a result, you have the unique chance to walk to a gorgeous white house Cycladic village and enjoy the flowery streets and bright white canvas under the shade of the Acropolis’ great walls.