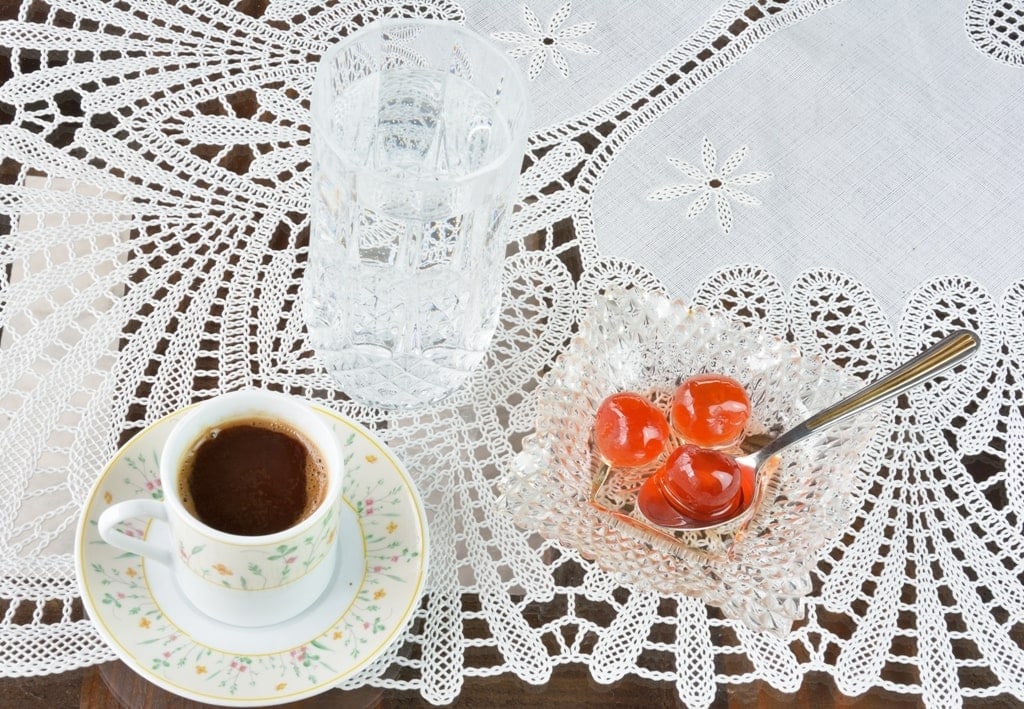 There is a running joke among Greeks and those who know Greeks that the ultimate Greek breakfast is coffee and a cigarette. There is even a meme about it!

And while there is some truth to that, in that Greeks tend to skip breakfast if they are in a hurry, working long hours, or generally having busy days, it’s not actually accurate. Greeks definitely are fans of having breakfast. The difference is that often they have it on the go when rushing to get to school, to work, or while commuting.

Greeks love their bread, marmalade, pastries, cheeses of all sorts, and baked goods for breakfast. Washing it down with strong coffee or a glass of milk, depending on the age, makes them ready for anything!

There’s a wide variety of Greek breakfast foods. No single one holds the title of ‘national’ Greek breakfast, as might be the famous English or German or French breakfast. Every region in Greece developed its own version of baked or fried delight, and each one is its own special treat.

What are the delicacies that Greeks tend to have for breakfast, and which you should absolutely sample once you are there?

One of the most low-calorie options is to enjoy your coffee with one of the various traditional spoon sweets.

Spoon sweets are fruit preserved in syrup that has been boiled with the fruit. The taste, texture, and sweetness mesh beautifully and the fruit fits in a regular teaspoon, hence their name. There are several types of spoon sweets, from strawberry to fig to orange to lemon to even unusual but delicious ones like rose petal and baby eggplant.

They go great with the natural bitterness of the traditionally brewed Greek coffee, especially if you take it without sugar!

Bread with butter and honey

Often the breakfast moms quickly prepare for their children before they go to school, bread with butter and honey is nutritious, tasty, and filling. Best enjoyed if the bread is made traditionally from scratch and the butter is allowed to be room temperature so it’s soft and easily spread. Top with honey, preferably thyme or blossom honey for a delicious treat even chefs rank at their top five.

Also called “koulouri Thessalonikis” since its origin comes from Thessaloniki, this is a large narrow round of bread that is crispy on the outside and smothered in sesame, but soft and fluffy inside if you manage to get one fresh.

It’s one of the most popular breakfasts on the road, and Greeks often have it together with coffee, dipping it in it. Such is its trademark ‘on the road’ identity, that you may see koulouri sellers at stoplights, going along the waiting cars and selling koulouri to the drivers while they wait.

Newest versions of this very traditional breakfast include making a round fun sandwich of this koulouri, with cream cheese and ham, or other cheeses and tomato.

Greece is renowned for its authentic, thick yogurt. The best yogurt is so thick it is almost like a pudding or nestled in a clay pot with a slightly thicker crust covering it all where all the taste is, some Greeks will affirm.

Top it with the famed Greek honey, preferably thyme honey or pine tree honey or even blossom honey. The sweetness will balance out the tanginess of the yoghurt. For texture and crunchiness, add walnuts, and you have a complete, nutritious, tasty breakfast to carry you through the day.

If there is a king of Greek breakfast, that has to be the pies. There are several different types of pies that Greeks have for breakfast, often made small enough to eat on the go, or cut up in sizeable pieces for the same purpose.

Enjoy cheese pie made of traditionally worked pastry or phyllo, crunchy on the outside and succulent and soft on the inside, especially if you get it still warm from the oven.

Then there’s also spinach pie or “spanakopita” which is a national favorite. Made either purely of spinach and wrapped in soft yet crispy, flaky dough, the filling can be also seasoned with other herbs and feta cheese for an extra touch of salt.

There are also other fillings for the pies, such as kasseri cheese and ham, potato and seasoning, herbs and onion, and many more. Modern versions include puff pastry filled with all that goodness, so don’t miss out!

Especially in Thessaloniki and the region of Macedonia in general, you will not know the essence of a Northern Greek breakfast if you don’t have at least one type of bougatsa. This traditional treat is a type of pie made with a technique that is unique to it. The secret of its creation is passed down from baker to baker, as it is meant to be spread out by hand alone until it becomes see-through.

The bougatsa is then filled with custard cream or cooked minced meat or spinach filling and baked. Then it is cut in little squares with a special knife and served with toppings on the go or to be enjoyed at the bougatsa shop. Chase it down with cool strong coffee and you’re good to go for the day!

Also called Strapatsada, this is the way to go if you’re up for a bigger breakfast. Kayanas is basically scrambled eggs cooked in tomato sauce in oil. As they’re tossed in the saucepan, herbs like basil or oregano, depending on your taste, and feta cheese along with other assorted cheeses are thrown in to mellow out and make for a creamy, tasty dish full of nutrition. The best kayanas is made with freshly chopped tomato and olive oil, so make sure to ask for that!

This is a traditional Cretan breakfast of champions! Intended to give energy for a hard day at the fields or with the flocks, staka with eggs (or “staka me avga” in Greek) consists of poached or fried eggs topped with staka, a type of creamy mix fluffed up with flour. Staka is made from the skimming of fresh milk as it’s taken from milk from goats and sheep. In essence, it is the cream of the milk, with all its butter. It’s then carefully beaten together overheat with sprinkles of flour to produce the renowned staka. From the process, there is also produced butter called ‘stakovoutyro’ which can also be used to cook the eggs in for an even more decadent, delicious flavor.

The dish is seasoned with salt and pepper and often accompanied by some slices of fresh tomato.

What is Grece’s National Dish?