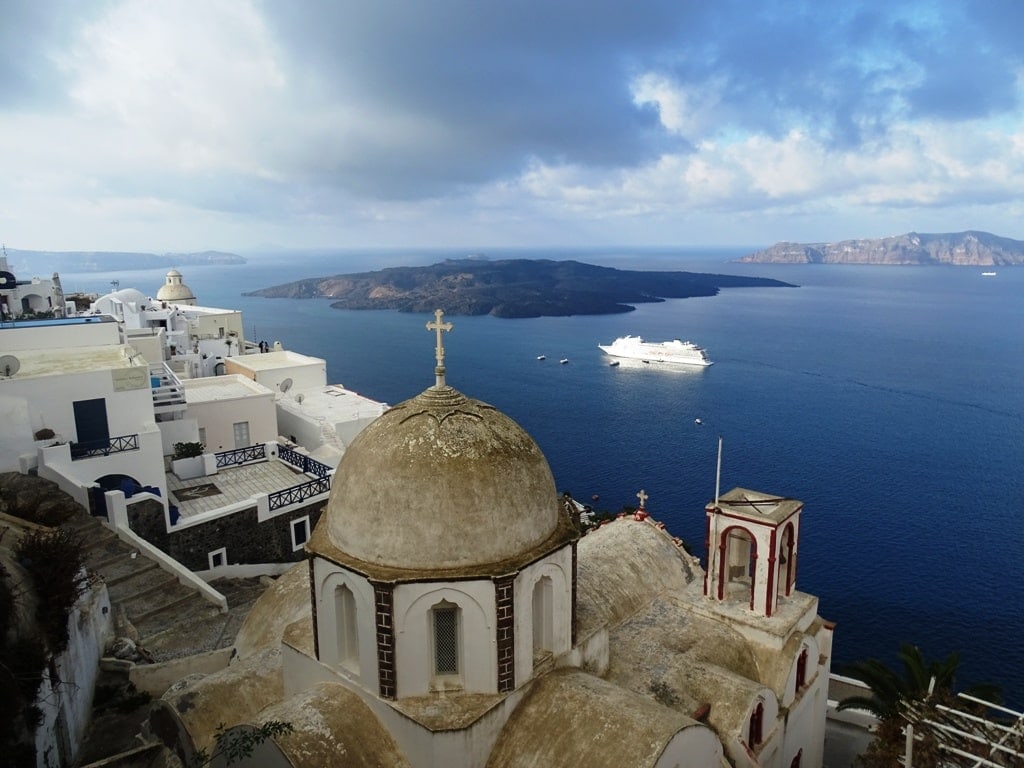 When thinking of a holiday in Greece, olive groves, endless beaches, and hot summers come to mind. However, visiting Greece in the winter is less popular since many of the islands are seasonal. By the end of summer, workers are traveling back to their families on the Greek mainland (or further afield), and restaurants and resorts are closed until the next tourist season. However, there are a few Greek islands that keep going all year round.

In this post, we’ll take a look at the best Greek islands to visit in winter. Whether you’re traveling in November, December, or January, you’re sure to find somewhere for you.

The Best Greek Islands to Go in Winter

Crete is Greece’s largest and most southerly island, and the temperatures in winter are often quite mild. There’s more to the island than just resorts, with four main cities and a range of archaeological wonders to explore.

Rethymno and Chania are both university cities and there are plenty of places to eat and drink throughout the year.

Hiking is popular in Crete and in the summer this activity can be draining and dangerous if you don’t have the right gear or enough water. Winter though is the perfect time to enjoy the kilometres of hiking trails that criss-cross the island. The snowy White Mountains in the centre of the island also make for some awesome photos.

Travelling around Crete isn’t as easy as in the summer. It’s a good idea to rent a car and split the cost with your fellow travellers. The cost is worth it to see sites like the Palace of Knossos with barely anyone around.

While Crete is one of the best Greek islands in winter, you may stop short of swimming in the sea. The weather may be mild, but the sea is cold!

Where to stay in Crete during winter: Chania, Rethymno, Heraklion

Rhodes is the 4th largest island in Greece and, though not quite as far south as Crete, it still benefits from mild winters.

The first stop is the UNESCO World Heritage Site of Rhodes Town. The capital of the island has a university and there’s always something going on all year round. There’s plenty of accommodation to choose from, and it’s not hard to find places to eat and drink in the evenings.

History buffs won’t be disappointed in the town, as the palace of the Grand Master of the Order, the former base of the Knights’ Templar, is on the island. There’s also an eclectic mix of Gothic, Byzantine, and Renaissance architecture.

With cruise ships and crowds absent, there are no better Greek islands in November. The beautiful town of Lindos also has one of the Mediterranean’s best micro-climates at this time of year. You’ll still get plenty of sun, though it might be a bit chilly to swim in heart-shaped St Paul’s Bay.

Where to stay in Rhodes during winter: Rhodes Town, Lindos

Santorini is one of the most popular islands in the whole of Greece. Its tourist season is getting longer and it’s becoming one of the best Greek islands to go in winter. The jewel of the Cyclades, it is built on the slopes of a volcanic caldera which is still active to this day.

Of the four villages on Santorini, Fira is the largest and best place to stay during winter.

However, the island isn’t fully seasonal and Santorini’s tourist infrastructure is limited from November until February. Some restaurants and nightlife are closed completely, so you may be better off visiting in shoulder season if you’ve got your heart set on fine food, drinks, and dancing.

Scenery wise, the island is just as spectacular during the colder months. Bring your camera as you can get photos of sugar cube houses and blue-domed churches cascading down the cliff sides. Oh, and you won’t have to fight for the best spot when shooting sunset photos!

Where to stay in Santorini during winter: Fira

Santorini isn’t the only one of the Cyclades Islands open to tourism in the winter. In fact, you’ll find hardly any difference at all between the summer and winter months on Syros except, of course, for the weather.

The administrative capital of the Cyclades island group has workers and students year-round, so there’s lots of choice for accommodation and the tavernas are open.

Ermoupoli is the island capital and your best base for a trip here. Dating back to the 1820s and the Greek War of Independence, the town is named after the Greek God of Hermes and is packed with neoclassical architecture.

The other town on the island, Ano Syros, dates back to medieval times when it was built by the Venetians. However, for places to stay and things to see and do, Ermoupoli is your best bet when searching for Greek islands in December.

Where to stay in Syros during winter: Ermoupolis

One of the most popular islands in Greece, Corfu is a jewel in the Ionian Sea. Visiting in winter means you won’t experience the nightlife of Kavos, but that’s probably a good thing if you haven’t just finished your A-levels.

Popular during Christmas and New Year, the best base in Corfu during winter is charming Corfu town. It’s a UNESCO World Heritage site and boasts examples of Venetian, Byzantine, and traditional Greek architecture – all of which look even better without the crowds.

Though hitting the beach isn’t completely off the itinerary (locals do it year-round), you may prefer to explore the hiking trails which connect pretty mountain villages instead. Corfu is one of the best Greek islands for hiking after all.

Corfu is one of the wettest islands in the country and up there with the coldest Greek islands in January. But don’t let that put you off, it’s still magical!

Where to stay in Corfu during winter: Corfu Town