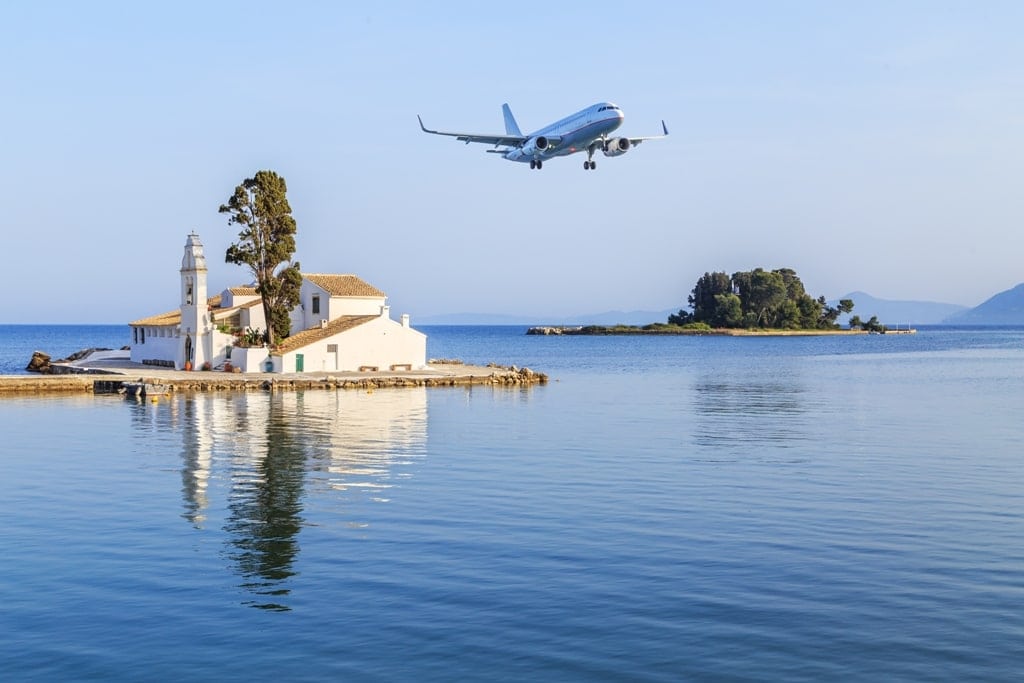 Which Greek Islands Have Airports?

Map of Airports at Greek Islands

The island of Crete is the biggest island in Greece. Crete has two big airports, located at Heraklion and Chania, and a third smaller one in the eastern region of Lassithi, called Sitia.

Heraklion is the biggest region in Crete, roughly located in the middle of the island. Its airport, called the Nikos Kazantzakis airport, is the second biggest airport in Greece. It was named after the famous Greek author and it is about 4 km outside the city of Alikarnassos.  Mostly, however, it’s known simply as ‘Heraklion Airport’ and it receives about 8 million passengers each year.

Chania airport, also called the Ioannis Daskalogiannis airport, is named after a very important Cretan historical revolutionary figure. It is highly organized and very modern. It receives about 3 million passengers each year. You will find it about 15 km outside the city of Chania and 70 km from the city of Rethymno.

Sitia airport is 1 km outside the city of Sitia, and it only operates during the summer season.

Visit Crete for flexible vacations suitable for families, couples, friends, or even solitary for the culture, natural beauty, history, and great cuisine!

Airports at the Sporades Islands

Two of the four main islands in the Sporades complex have airports. Skiathos and Skyros. Skiathos airport receives about half a million passengers each year, and operates throughout the year, with most flights happening during the summer months.

Skiathos’ airport is also called Alexandros Papadiamantis, after the famous novelist, and attracts international attention for its famous (or infamous?) low landings, which you can watch as they happen! That’s why Skiathos’ airport is called the European St. Maarten.

Skyros airport is a small airport operating domestic flights only to Athens and Thessaloniki.

Visit the Sporades for the lush, green natural beauties, the sparkling blue, quiet beaches, and the unique architectural style.

Airports at the Dodecanese Islands

You will find eight airports scattered at the 12 main islands of the Dodecanese. Of them, Rhodes airport is the biggest and most popular one.

Rhodes (Diagoras): The airport is international and serves more than 5 million passengers each year. You can find flights to Rhodes during the winter, too, but you will need to connect via Athens or Thessaloniki.

Astypalea: A small airport that receives flights from Athens all year round.

Kasos: Another small airport with flights from Rhodes and Karpathos.

Leros: The airport receives flights from Athens and some other Greek islands.

Kalymnos: It receives domestic flights mainly from Athens and other Greek islands.

Visit the Dodecanese for the stunning medieval architecture and sites, the great food, the beautiful beaches, and the breathtaking vistas!

Airports at the Cyclades Islands

Perhaps the most famous of the Greek island complexes, the Cyclades have two main airports, one located in Mykonos and one located in Santorini (Thera).

Mykonos: The Mykonos International Airport is active all year round, and one of the busiest in Greece. Santorini’s airport is the most popular though, with more than 2 million passengers per year.

Santorini: You will find direct flights to Santorini from several European countries, and of course many flights via Athens and Thessaloniki.

Milos: It only receives small aircrafts mainly from Athens.

Visit the Cyclades for the iconic, picturesque, whitewashed villages and blue-domed churches, the good food, the stunning sunsets, and the unique local character.

Airports at the Ionian Islands

The Ionian islands are famous for their unique, lush flora that yields sites of outstanding natural beauty, their interesting history, the beautiful architecture with the neoclassical fusing with the medieval and traditional styles, and of course the great wine and food.

Cephalonia: It also has an airport that operates throughout the year.

Kythira: It is the last Ionian island that has an airport (Alexandros Aristotelous Onassis), again serving passengers with flights from Athens and Thessaloniki but also charter flights during the summer.

Airports at the North Aegean Islands

There are many famous and popular islands in the North Aegean complex, famous for their unique historical heritage, their traditions, the medieval architecture and fortifications, their food, and their folklore.

Lesvos: The airport operates around the year serving flights from Athens and Thessaloniki, and charter ones during the summer.

Samos (Aristarchos of Samos airport): The island of Pythagoras, has domestic flight all year round and charter flights during the summer.

Lemnos: The island’s airport (Ifestos) serves flights from Athens and Thessaloniki but also from the nearby islands. During the summer you will find charter flights to this incredibly diverse island with the rich war history.

Ikaria and Chios’ airports serve domestic flights only. They are small and mostly busy during the summer season.