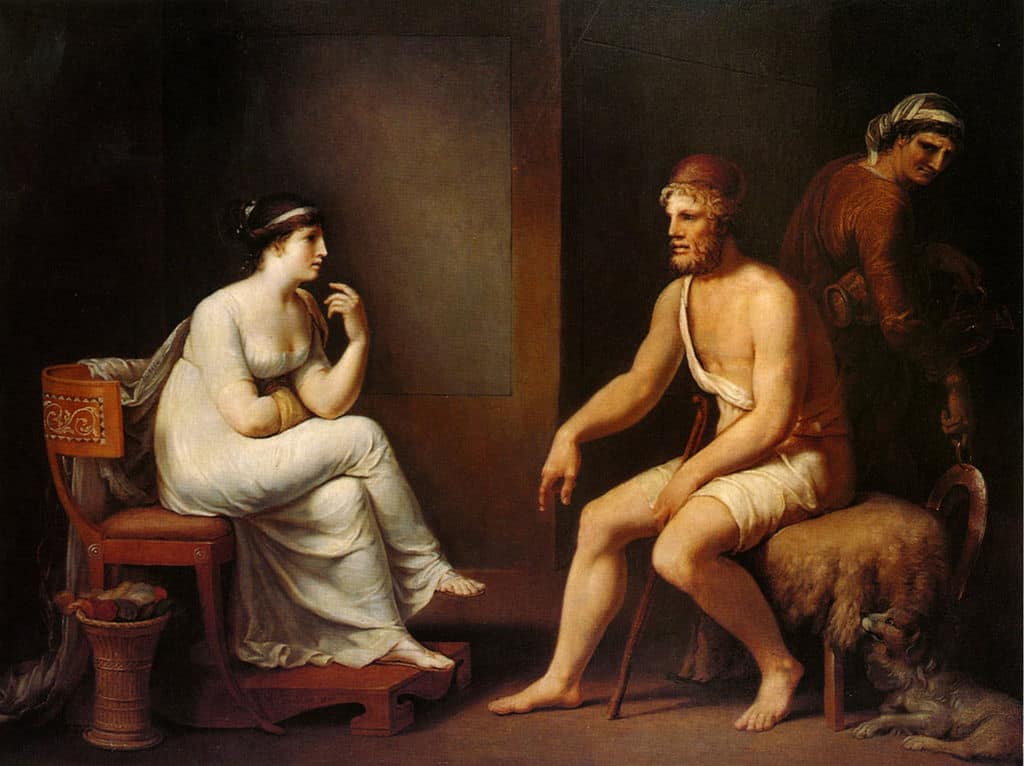 For Ancient Greeks, love was a fascinating emotional and mental condition. It’s no accident that in the Greek language, especially ancient Greek, there are not just one, nor two, but eight different words for love, each signifying a different aspect of affection for others and ourselves.

Hero was a priestess of Aphrodite. As such, she was forbidden to have affairs with men (in some versions, she was simply a virgin). She lived in a tower (or temple) on the Greek side of the narrow Hellespont straights. Leander was a young man from Abydos, living on the other side of the Hellespont.

When once he saw Hero, he fell madly in love with her. With his soft-spoken words and devotion, he soon inspired the same love in Hero. Each night, she would light a lamp, which guided Leander to swim across the Hellespont and spend time with her.

One night, however, the wind was too strong and blew out the lamp while Leander was still swimming across. The waves were too high due to the wind, and Leander lost his way and drowned.

In her grief and desperation, Hero threw herself in the raging sea and drowned as well. Somehow, their bodies were found on the beach, in a tight embrace, and that’s how they were buried.

Orpheus was the son of Apollo and the muse Calliope. He learned how to play the lyre from Apollo himself. His music was so divine that nobody could resist him when he played. He fell in love with a beautiful young woman named Eurydice.

She loved him back dearly and they married, living in bliss. Eurydice was so beautiful that a shepherd, Aristaeus, tried to seduce her. When his advances became too aggressive, she tried to run away running through some thick brush. But there was a snake there, and bit her, killing her instantly.

Orpheus was deeply grieved and sang about his desperation and longing for Eurydice in such a beautiful and compelling manner, that even the god of the underworld, Hades, was moved. He allowed Orpheus to descend into the underworld to see her, and because Orpheus’ music was imbued with utter joy, he agreed to let him take her with him back to the land of the living.

But on one condition: that he would not look at her once while they were walking towards the surface.

Unfortunately, Euridice begged him to look at her and in the end, he relented and tried to steal a glance. Immediately, Euridice was sucked back into the underworld, and Orpheus had to return alone. Orpheus then played his lyre, calling for death to take him, so he could join her anyway.

Pygmalion was a great sculptor in Cyprus (in some versions he was also a king). He was a dedicated bachelor and declared he would never fall in love. Around that time, he was working hard on a sculpture of a young woman, and it came out so beautiful and lifelike, that Pygmalion fell in love with it. Ashamed to admit it, once Aphrodite’s festival came about, Pygmalion made offerings and asked of the goddess that he meet a woman as beautiful as his sculpture.

When he returned home, he kissed his sculpture with a sigh. To his surprise, he found that the ivory had become warm! He kissed the sculpture again, and it turned into a living, breathing woman, named Galatea. He married her and lived happily with her.

Psyche was the youngest daughter of a king. She was the most beautiful of all three. So much so, that there were rumors she may be a goddess, or even Aphrodite herself, and people worshipped Psyche instead of the goddess. Aphrodite was offended by this, and she sent her son, Eros, the god of intense desire and love, to shoot her with an arrow and force her to fall in love with something hideous, as punishment.

Eros did fly to the palace to do his mother’s bidding, but he scratched himself on the arrow and fell in love with her instead. He flew away without shooting Psyche, who carried on without being able to fall in love. Her father eventually asked the Oracle for a prophecy and was distressed when he was told Psyche would love a dragon-like creature of fire that even the gods feared.

Quickly, they decided to sacrifice Psyche by leaving her at a tall mountain in a ‘marriage’ of sorts, to the horrid creature. From there, the Zephyr, the god of the north wind, transported her to Eros’ palace.

Psyche lived happily there, even though her husband never appeared. Because her sisters were jealous, they manipulated her into Eros’ bedroom and peek at him. She did so, but accidentally burned him with the lamp’s oil, and he fled.

Aphrodite vowed revenge, and kept the lovers separated. Psyche had to go through several trials to earn the right to see her husband again, even though Eros eventually opposed this. Eros had to escape Aphrodite, to go find Psyche and stop Aphrodite’s revenge. They lived happily ever after.

Ligdus and Telethusa were husband and wife in Crete. They were very poor, and though they wanted children they knew that they couldn’t afford a girl, because she would need a dowry.

Ligdus told his wife when she got pregnant that if the baby was a girl, he would sadly need to kill her. Telethusa was grieved, but during the night, the Egyptian goddess Isis visited her and told her she would assist her.

When Telethusa gave birth to a girl, she disguised the baby as a boy. Ligdus didn’t understand a thing and named the baby Iphis. Telethusa was happy because the name was unisex. Iphis grew up as a boy.

A beautiful maiden called Ianthe fell in love with Iphis. Iphis, too, loved her back, and Ligdus agreed to marry them. But Iphis was desperate because it would be revealed she was a woman and forbidden to love Ianthe. But Isis intervened and turned Iphis into a man, so they married and lived happily with Aphrodite’s blessing.

Atalanta was a virgin huntress. She was so good at hunting that no man could best her. She also despised marriage, and any man who tried to win her hand found a terrible end: Atalanta challenged the suitor to a race against her. If he lost, she killed him. But Hippomenes was not a simple man, either. He was a disciple of the centaur Chiron and the best among the Caledonian hunters!

When he saw her, he fell in love with Atalanta and he accepted her challenge. His confidence and character appealed to her even before the race! When they started running, she was leading the race because she was faster than him. But Hippomenes tossed a golden apple in her way, and she stopped to pick it up, giving Hippomenes the opportunity to run ahead. Whenever she would overtake him, he would toss a golden apple, until he won the race, and Atalanta’s hand in marriage.

Halcyon was a princess of Thessaly who became the queen of Trachis. She married Ceyx, who was also of noble birth. They loved each other very much, and they were a very loving and devoted couple. When in bed, they could call each other Zeus and Hera, which angered Zeus, who set out to punish them.

While Ceyx was traveling on a boat, Zeus threw a thunderbolt, sinking the ship and drowning him. While she was sleeping, Halcyon learned of his death in a dream by the god Morpheus. Mad with grief, she threw herself in the sea and drowned. The gods then took pity on the couple, moved by Halcyon’s love, and transformed them into halcyon birds (common kingfishers).

Hyacinthus was a Spartan prince, who fell madly in love with Apollo. He was extremely handsome and graceful, and Apollo returned his love and affections. They were often together, much to the consternation and jealousy of Zephyr, the god of the north wind. He tried to appeal to Hyacinthus for his love, but Hyacinthus chose Apollo over Zephyr.

So, one day, when Apollo was throwing disks, Zephyr made a gust of wind carry the disk away. It hit Hyacinthus’ head hard, killing him instantly. Apollo was deeply grieved and created the flower hyacinth, which bloomed for the first time where Hyacinthus died.

Odysseus was the king of Ithaca, who went to fight in the Trojan Wars, leaving behind his wife, Penelope, and their young son Telemachus. The couple had been very loving, and while she waited for his return,

Penelope remained faithful and true. Because Odysseus took twenty years to return, many young men assumed he was dead and crowded Penelope at the palace as her suitors, trying to convince or force her to marry one of them.

But, like Odysseus, Penelope was cunning, and she devised several tricks and ruses to keep them from forcing her hand and to protect her son from getting killed. When Odysseus returned, he killed the suitors and regained his throne, which Penelope had preserved for him.

Adonis was a prince of Cyprus, born of incest between his mother and grandfather. Because his mother had to flee to escape her father’s wrath, Aphrodite turned her into a tree, and from that tree was born Adonis. He grew up to be the most handsome mortal man alive, and Aphrodite fell in love with him. But, so did Persephone, the queen of the underworld, who had raised him.

Adonis chose to spend his third of the year with Aphrodite, and he’s known as Aphrodite’s mortal lover. When Adonis died from a wild boar attack, Aphrodite took him into her hands and wept inconsolably. Her tears mixed with his blood and created the anemone flower.