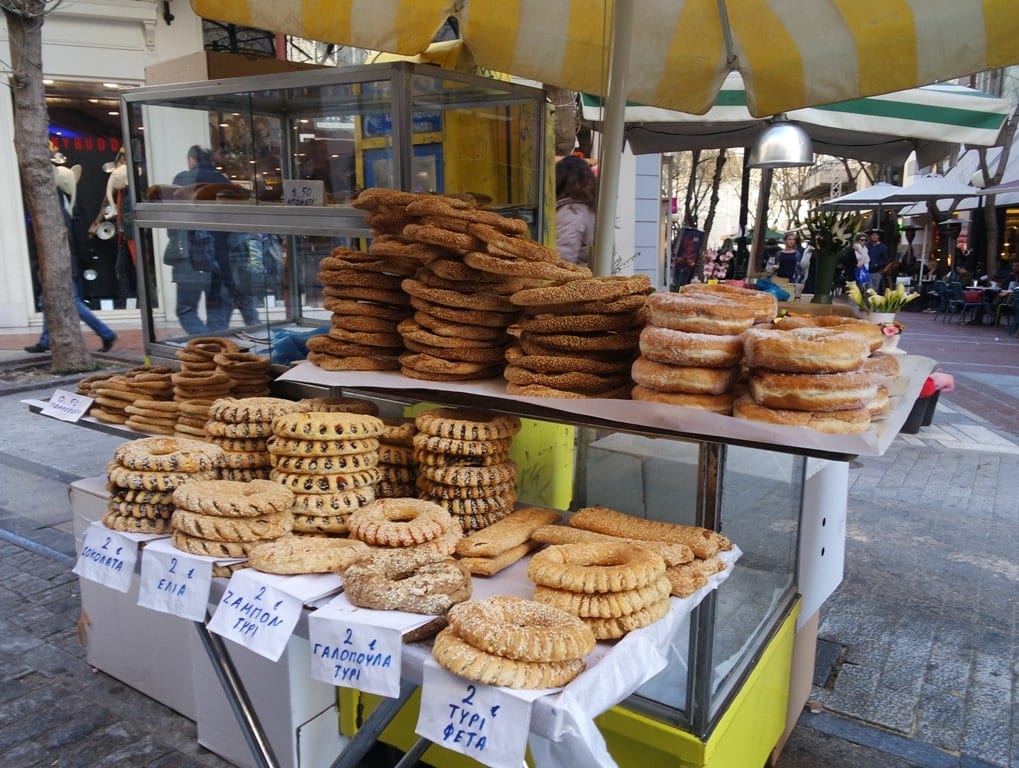 Greece is renowned for its natural beauty and surprising diversity of settings, environments, views, and landscapes that one can visit. The hospitality of the locals is also part of the culture, ingrained through millennia of history. It already would be perfect but that’s not all Greece has to offer: The food is also amazing!

Greek cuisine is a big part of the famously healthy and balanced Mediterranean diet, and that includes street food. Considering that street food is comfort food, Greek street food is remarkably nutritious and healthy on top of being absolutely delicious.

Depending on the region, there are some variations or unique local delicacies sold as street food, but the following options are ubiquitous in Greece.

Pamper yourself with some cheap, delicious, nutritious street food as you roam and explore the beauties of Greece! You should especially not miss out on:

Koulouri is the quintessential morning street food for all the locals. It is a large round of narrow bread coated with sesame. Good koulouri is crunchy on the outside and soft and fluffy on the inside. It is called “Thessalonikis” (meaning, from Thessaloniki) because that’s where the best recipe for it originates. The history of this street food heralds from as far back as the Byzantine Empire, and it was reintroduced in the early 20th century by Asia Minor Greeks who came to Northern Greece as refugees in 1922.

There are many variations on the original koulouri that are just as delicious, sold in the morning at bakeries or even at streetlights by sellers carrying large, stacked trays or baskets of them. Make sure to try koulouri with cheese baked in, and koulouri sandwiches where the roll is sliced up and slathered with cream cheese, ham, lettuce, and other fillings of your choice.

If you want to taste it strictly traditionally, get a simple koulouri and dunk it in your Greek coffee in the morning!

If you find yourself waking up in Thessaloniki or anywhere in Macedonia or Thrace, make sure to try Bougatsa for your breakfast. The city of Serres is where the best bougatsa is made. This is yet another street food delicacy brought over by the Greeks of Asia Minor and Constantinople at the beginning of the 20th century.

Bougatsa is a type of pie made with special bougatsa phyllo and can have several different fillings, both savory and sweet. Traditional bougatsa is the one with semolina custard cream filling, served chopped up in a thick sheet of paper and doused with cinnamon and powder sugar.

You can also get cheese, spinach, and ground meat bougatsa. The phyllo is crunchy and flaky, the filling succulent and full of fragrance. It’s always chopped up in front of you so you can enjoy it in small bites as you go.

“Tiropita” or cheese pie is another breakfast street food staple for Greeks, and with good reason: Cheese pie comes in several different variations, with roots in traditional pies from many regions as well as from 20th-century city life, all of them delicious and unique.

There is kourou cheese pie, made of thick but flaky dough and filled with feta cheese. Kourou cheese pie often has sesame sprinkled all over it. This is considered quite traditional.

Then, there is the puff pastry cheese pie version. Inside buttered-up, crunchy puff pastry, there is kasseri, gouda, or cheddar filling. Often there can be a combination of all these cheeses and it’s served warm.

Another traditional one is the pan cheese pie, which is made of several layers of thick but crunchy phyllo with an even more opulent cheese filling in the middle layer.

You can also have strifti cheese pie (i.e. “twisted”) which is another pan cheese pie version, only now the phyllo is rolled into a tubular twisted shape and the pie made in a large spiral in a pan.

Finally, there is also the triangular sheet phyllo pastry cheese pie. This one is made of very crunchy, paper-thin phyllo and can be baked or deep-fried.

Each cheese pie has its own special taste so make sure you try them all!

The world-famous “spanakopita” or spinach pie is yet another breakfast street food queen. Spinach pie is usually made with traditional layered phyllo and a thick lush filling layer in the middle. You can also find it with sheet phyllo for extra crunchiness.

The filling can be solely spinach (especially during Lent when locals abstain from cheese) or it can be mixed in with feta cheese for extra flavor. Spinach pie is one of the most fragrant and healthy types of breakfast street food as it often contains many herbs except for spinach. Olive oil is used to make the phyllo crunchy.

Souvlaki Kalamaki (on a skewer)

This street food hails as far back as early ancient, Bronze Age Greece! It is very simply chunks of meat, usually pork, but you can get chicken, beef, and lamb variations.

Souvlaki kalamaki is eaten hot off the grill while still on its skewer. “Kalamaki” means “small reed” which is what the skewers were traditionally made of. Together with the skewers, you are traditionally given half a lemon and toasted bread drizzled in olive oil. The meat skewers are often sprinkled with oregano.

Souvlaki kalamaki can also be served with pita pieces and some French fries as a bed for them.

Gyros is meat carved off a vertical rotisserie where it’s in layers and slowly cooked. It usually is pork or chicken.

Gyros is usually served wrapped in a grilled pita together with tomato, onion, french fries, and condiment (either tzatziki or a mix of mayonnaise and mustard).

Gyros wraps are full of taste and texture, with the pita supposed to be crunchy on the surface and soft on the inside. Pitas are often grilled with the fat off the rotisserie or with olive oil for extra fragrance.

Corn on the comb

You’ll find this served in the afternoon at street corners by vendors that are grilling corn on the comb and filling the atmosphere with a very pleasant and characteristic, delicious fragrance.

You get the entire corn on the comb, sprinkled with salt, and you are supposed to bite the corn off it. The grill makes it crunchy and the charcoal aroma gives it a unique punch, making the taste of the corn pop!

Greeks associate corn on the comb with fun times and festivals!

Fish in a cone

These are especially prevalent in seaside villages and islands. They are also called “gonos” (i.e. “baby fish”). Fish in a cone is literally deep-fried, whole, tiny fish in a paper cone, for you to eat more or less as you would popcorn. You eat the tiny fish whole, bones and all, and they are crunchy, succulent, and very tasty! Usually, you get half a lemon to drizzle over them.

These classic deep-fried doughnut-like sweets have delighted the locals since Byzantine times! They are treats traditionally served with honey syrup, crushed almonds or nuts, and generous amounts of cinnamon.

Traditionally they come in two versions: large, spherical or flattened, with or without a hole in the middle, swimming in the syrup with the nuts and cinnamon drizzled on top, or tiny, spherical, and coated in sesame. These latter ones don’t swim in syrup at all because the syrup is all inside! You are supposed to eat them whole (which is why they are tiny) so the syrup will explode in your mouth with the first luxurious bite.

Nowadays there are more variations of loukoumades, served with chocolate, ice cream, and a lot more.

Make sure to taste them in their traditional version first, and then experiment away!

Dried figs and raisins are yet another ancient Greek street food delight! They are sold on a string or packaged up. They are very sweet and high in energy while they also are extremely nutritious. Nowadays they are often used in salads, but they are great for an energy boost during long walks or explorations!

Especially after dusk, you will find many street vendors selling a variety of dried nuts and crispy treats, from pistachios and peanuts to hot rice crisps, savory almonds, tiger nuts, and other obscure delights for you to try! They are sold in tiny paper bags from 50 cents to 3 euros, depending on the size and rarity.

Chestnuts on the grill

If you find yourself in Greece during the winter, you must get a taste of chestnuts on the grill! Sold by the same street vendors that in the summer grill the corns, chestnuts roasting over the grill are a unique Christmasy aroma that is simply irresistible!

You get big chestnuts, golden in their blackened shell, all in a cone, and still quite hot as the vendor will take them off the grill for you on the spot. The chestnuts are soft and sweet inside while they retain the charcoal fragrance. Chestnuts on the grill will warm you instantly on those chilly winter walks!

Again a must for winter explorations, salepi is a thick, rich, viscous, sweet, and aromatic beverage made from salepi powder. It comes from Constantinople and was again introduced to mainland Greece by the Greeks of Asia Minor, though there is an indication that it was also around in mainland Greece due to the Ottoman occupation.

Salepi is considered not only a tasty beverage, but also a very therapeutic one: it’s considered as an antitussive, good for asthma, and good for stomachaches! A cup of salepi will warm you right up from within, no matter how cold it is.

1 thought on “Greek Street Food You Must Try”

3 shares
We use cookies to ensure that we give you the best experience on our website. If you continue to use this site we will assume that you are happy with it.Ok