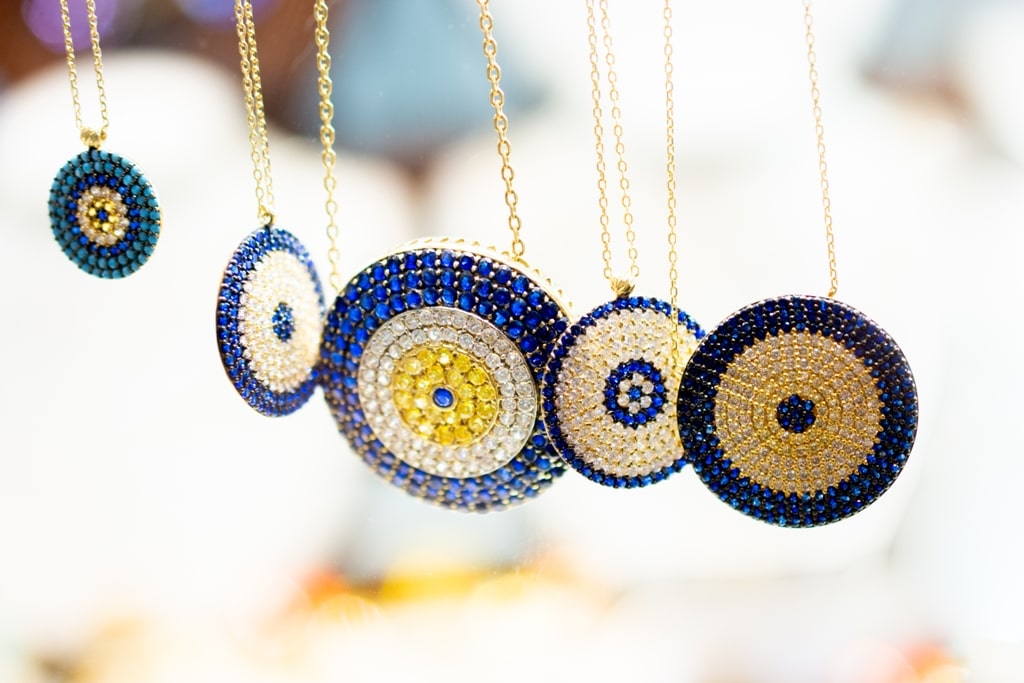 Every culture has its own unique superstitions, like a special kind of seasoning in a perfect dish. Greece is no different!

Greeks have several superstitions that have been passed down over generations within their culture, many of them with a historical background indicative of various stages in Greek history.

On the other hand, many others are just completely weird, and nobody knows how they sprung up!

While the newest generations don’t really believe in superstitions like the older ones did, a lot of them still remain as part of the culture in joking, turns of phrase, or even folklore that is passed around for fun.

Here are some of the most popular and lasting Greek superstitions:

Probably the king of all Greek superstitions, the Evil Eye, called “mati” in Greek, is when evil influence comes upon you, caused by someone else’s envy or jealousy. The other person usually stares at you intensely with that feeling of envy or jealousy or even maliciousness in general, and this negative energy impacts you.

Effects might include anything from persistent headaches to a feeling of nausea to accidents happening (often to ruin something that may have been the trigger for the other person’s envy, like, for example, spilling coffee on your new blouse). Some believe it can even cause grave physical harm or even death!

Blue-eyed people are thought to be especially prone to giving the evil eye, even if they are actually admiring and not envying you.

To ward off the evil eye, you wear a charm: usually, it is in the form of a glass pendant depicting a blue or cyan eye, also called a Nazar.

Another way is to spit at the person you wish to protect- of course not with saliva! You will often hear a Greek admire you and then add, while making three spitting sounds, “Ftou, ftou, ftou, so I don’t give you the evil eye”.

If you get the evil eye despite your wards, there are ways to throw it off: old yiayia’s will each have their own little secret prayer and ritual, depending on the region, but a standard way is to use a glass filled with common tap water, a splash of oil, or whole cloves which you light on fire. The ritual is called “xematiasma” (i.e. pulling out the evil eye) and it is either taught from men to women and from women to men, or, if you need to learn it from the same gender, you need to ‘steal’ the words. That means to overhear the whisper and parse out the prayer’s words yourself.

When has the “xematiasma” worked? When both you and the one doing it yawn, and a feeling of lightness ensues.

Sewn into a small colorful woolen pouch which can be pinned discreetly somewhere on your person, there will be a talisman. That is supposed to guard you against misfortune, accidents, and malfeasance of all kinds. It will, of course, also protect you from the evil eye or ‘mati’.

Within the pouch, there may be several different things considered sacred. The most sacred, and thus the most powerful, of talismans are those containing wood from the cross upon which Jesus Christ was crucified. There are also others containing sanctified things, such as sacred oil, laurel leaves, and other items that carry blessings of some sort.

You will most likely see a protective talisman pinned to the clothes of a baby or the baby’s crib, but older people may carry them in their pockets or pin on the inside of their jackets and the like.

Never Give a Friend a Knife

It is considered bad luck, and a bad omen that you will seriously fall out with your friend if you hand them a knife.

What you should do if they as you for one is to leave the knife on a table or surface near them, and they will pick it up on their own.

If your right palm itches, it means that soon you will be receiving money from somewhere, even if you aren’t expecting any.

If your left palm itches, it means that soon you will be forced to give money to someone or something.

When you are carrying coffee and it spills over, then Greeks will call out “youri! Youri!” which means “it’s for good luck!”

The superstition goes that if your coffee spills over, you will have good fortune of some kind, usually monetary.

Did A Bird Dropping Fall on You? It’s Good Luck!

When you are minding your own business and suddenly a bird’s dropping falls on you, then you will have good fortune- even though you must clean it out.

Don’t Leave Scissors Open, or Use Them Without Cutting Something

If you leave scissors open, or you idly open and close them without using them to cut into something, then you are inviting poisonous gossip about you. So don’t do it!

Don’t Leave Your Shoes Lying on Their Side

Shoes lying on their side are a symbolism of a dead person, so if you leave them like that, you are inviting death.

If You Gift a Perfume or Kerchief, You Must Get A Coin in Return

Never gift perfume or kerchief! Like giving a knife, it means you and your friend, or even worse, your significant other will soon have a fallout or even separate.

If you want to give perfume or kerchief, the person you gift it to must immediately give you a coin after receiving it, to ward off evil spirits and nullify the bad omen.

If You Sneeze, People Are Talking About You

Don’t Lend or Give Bread At Night

If you let someone borrow bread from you at nighttime, it’s bad luck. It means that you will soon become a pauper and lose all your fortune. To give bread at night, you must pinch the loaf at the edge a little, thus keeping some of it in the house, and ward off the bad luck and the evil omen with safety.

Always Leave From the Same Door You Entered

If you “cross the doors” which means you leave from a different door than the one you entered the house through, you will lose your true love, or suffer a bad breakup with your significant other.

Always Enter With the Right Foot In a New House

Salt Drives Away the Unwanted

If you don’t want a person to be in your life, or if you don’t want them to come back to your house, all you need to do is sprinkle a pinch of salt behind their back, without them noticing! They will be out of your hair in no time!

In the same vein, to drive out evil spirits or keep them out of a new house, car, or other new places, sprinkle some salt in before you enter (always with the right foot).

If You Gift a Wallet, It Has to Be Full

If you give a Greek person a new wallet but it’s completely empty, you might actually offend them, because it’s considered a curse! A new, completely empty wallet gifted to you means you will always be short of money, or without any money at all!

To gift a wallet to a Greek person, it has to be ‘full’: Place a coin or a banknote in it. The value of the coin or banknote has no importance, the fact that it’s not completely empty does.

If you happen to be talking with your friend or someone else, and you say the same thing in tandem by accident, you must both yell “touch red!” and actually touch something that has red color.

If you don’t, you and that person will soon enter into a fight, and you want to avoid that.

If, while you are chatting with someone, something really nasty is said as a possibility, then to ward off evil spirits that might try to make it come true, you and everyone else will say “touch wood” and knock on a wooden surface or thing three times.

For example, if you say something like “if X died…,” you immediately then have to say “touch wood” before you complete your sentence, knock on wood, and then continue talking.

Dragees Under Your Pillow

If you put dragees (egg-shaped candy given out at weddings) you got from a recent wedding under your pillow, tradition and superstition has it that you will see who you will marry in your dreams that night.

The Last Drop of Wine

If you are at a dinner party with Greeks, and you are served the last bit of wine left in the bottle, then they will shake out the very last drop to make it fall in your glass. As it does, they will also say “all the men/women to you” depending on your chosen orientation. Superstition has it that if you get the last drop out of a bottle of wine, then all the people that can possibly be your romantic interest will be hopelessly attracted to you.

It doesn’t work if you do it on purpose though!