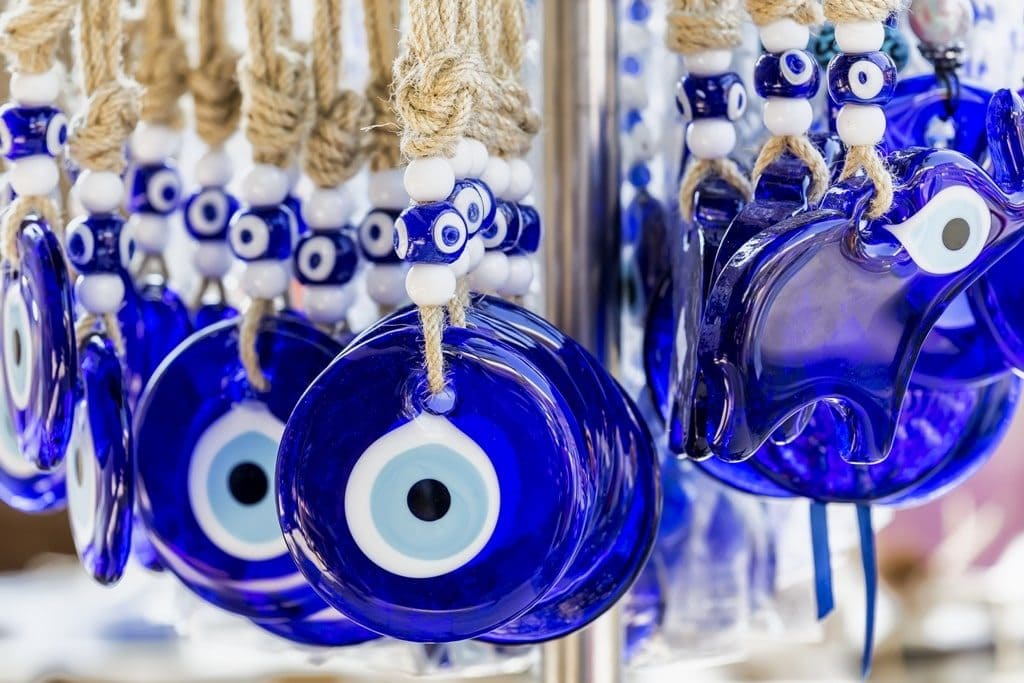 Greece has a rich and long history that spans several millennia. Over these several centuries there are many parts of history, a lot of mythology, and innumerable communal experiences that the Greeks share as a nation in a deep, visceral place where emotions lie. It’s these experiences and the history that have shaped the unique culture that imbue modern Greece today.

This culture is not only about respecting and being proud of the famous ancestors of antiquity that shaped so much of what we call “the western civilization” today. It is about living, breathing history and past experiences through customs that survive and are alive today, with roots in antiquity or medieval times.

Knowing some of the basic customs of the Greeks can greatly enhance your experience when you visit, especially since a lot of those customs are not only upheld quite faithfully but also are alluded to by many Greeks in their casual everyday speech!

To know what they’re talking about, and to best enjoy your time in Greece, here are some of the most important Greek traditions that you should know about!

Everyone has their birthday that they celebrate, but Greeks also have Name Days! Most of the Greeks are named after a saint of the Orthodox Greek church. Names of saints such as Maria, Giorgos (George), Yiannis (John), Dimitri, Anna, and many more are very prevalent among the Greeks. On the day when these saints are being celebrated (usually their death or martyrdom anniversary or commemoration), their namesakes have their Name Day.

The Name Day is a second birthday: presents are given to the one celebrating, gatherings and parties are arranged, and the well wishing is considered a staple of social protocol in Greece: so much so that there are apps that remind people of Name Days as they roll in, so nobody forgets to at least call and wish their best to their friend, colleague, or relative that is celebrating.

The reason that Name Days are a thing goes back to medieval times, when name giving had a somewhat magical aspect to it: it was believed that the name that was given would have significant influence in their destiny and wellbeing. Being given the name of a saint was basically making that saint the baby’s patron saint, in a casual dedication of the baby to the saint in question. Often, the child was expected to work to rise to the virtue of the saint whose name they carry. As a result, when the saint is celebrated, so are the people who carry his/her name.

When March rolls in, Greeks (especially youth) wear the ‘Martis’: a bracelet made of intertwining strings of white and red color. The ‘Martis’ is supposed to protect the wearer from the scorching of the sun. In earlier times it was thought to protect from disease in general. The white color symbolizes purity and the red one symbolizes the joy and zest for life.

The wearer is supposed to only take off the Martis bracelet when they see a blooming tree or a first blooming flower. They then tie the bracelet to the tree they saw or the nearest one to the blooming flowers.

Why is the protection needed from March? Because, as the Greek saying goes, “Evil March will flay and burn”: March’s weather is very whimsical, with days that can feel like summer (burning) and days that can be very cold and destructive with winds and storms (flaying).

The bracelet is supposed to at least give protection from the burning! It is not needed when Spring has truly set in, which is why you’re supposed to take the bracelet off and hang it on the tree that heralds the warmer, calmer days that are coming.

May is when the celebrations for spring and summer really take hold. On the first of May, a tradition takes place that holds as far back as antiquity, with the ancient Greek celebration of “Anthesteria”, which was the ancient Greek flower festival, being its greatest ancestor: the May Wreath.

The May Wreath is a wreath that traditionally is made of wildflowers picked at dawn by the young girls of each house, and made into wreaths using vines or young green bendable branches that serve as the wreath’s wiring that supports the flowers.

The wreaths are then hung on the outside of the house doors and left there until they completely dry out. The wreath is supposed to be a protection from evil spirits and an invocation for fertility and affluence.

Once dry, the wreaths are not thrown away. They are kept so that in midsummer they can be burned! On June 24, the feast day of St. John, the wreaths are all gathered up and used to create huge bonfires. Young kids and couples that want good luck then run and jump over the flames as the rest of the people in the feast sing and dance about spring and summer.

This is a superstition that still holds today, especially with the older generations, and with people in the villages and highlands. Believers in the “Mati” believe that someone who stares at you persistently with jealousy or deep envy or loathing can give you the evil eye, or ‘mati’. Those who are suffering from the evil eye can get strong headaches, a feeling of nausea, extreme weakness, or a feeling of heaviness. They also seem to have bad luck or little mishaps happening, such as being clumsier than usual.

The evil eye can wear off on its own, but for some people, it is believed to last for days or end until an expert in banishing the evil eye (called ‘ksematiasma’) says intense prayers while performing a little ritual- usually burning a clove on a needle over a cup filled with water. If the clove bursts while burning, it indicates that there is ‘evil eye’ upon the person. The prayers are then said, and the clove set in the water, and another one lit on the needle. The process continues until the clove doesn’t burst anymore, and then the person drinks the water in the cup, to completely dispel the evil influence.

Of course, this process varies from region to region, and the religious prayers said do as well. Some are even directly sourced from ancient pagan rituals, rather than Christian ones.

One of the most popular wards for the Evil Eye is the ‘mati’ gem, also called a nazar: a blue glass bead with the schematic of an eye. This is said to represent the eye of God, and thus evil spirits are afraid and leave.

Curiously, people that have blue eyes or were born on Saturday are said to be especially efficient in giving the Evil Eye to others!

It is believed that people born on Saturday are especially adept at giving blessings and curses, whether they do it intentionally or not: a person born on Saturday can wish you ‘good luck’ and this wish is highly lightly to grant you actual good luck. Just as if they curse you, their curse is likely to ‘hold’.

This superstition comes from several superstitions from the medieval times, and especially the Byzantium, where Saturday, being the day of the Sabbath for the Jews, was a peculiar day of significance when ‘the enemies of Christ celebrate’, while Christ too was Jewish.

People born on Saturday were also thought to be able to see spirits and things normal people couldn’t, in a sort of innate divination talent.

Nowadays, the superstition isn’t really believed (except for the ‘Mati’), but there are turns of phrase and jokes made about the ‘Saturday Born’ folks.

The First Day of the Month

The first day of the month is very important. It is considered that your countenance and your actions during the first day of a month will foreshadow and determine how that month will go: if you are grumpy and sloppy, so will that month be full of things to be grumpy about and governed by sloppiness. If you are pleasant and optimistic and tidy, your month will go in the same trajectories.

If the first day of the month happens to be January 1st, the first day of the year, what you do affects not only January, but the entire year, so that is why (besides the official New Year’s customs) people make sure to be happy, make other people happy, and celebrate throughout the day!

Greeks make sure to greet everyone with wishes for a good month on the first day of the month as well. This goes for mere acquaintances as well as unknown people, or people on the phone!

That’s because the Christmas tree is a fairly recent addition to the customs and celebrations associated with Christmas in Greece, which was introduced during German-born King Otto’s reign in the 19th century.

The actual thing Greeks would decorate during Christmas was the sailboat. Greece has always been a maritime country, and the sailboat was pivotal in the people’s lives and economy. Because often sailors would return to their homes for Christmas, the boats would be decorated in celebration, and that’s where the tradition comes from.

The last week before Lent begins, which is the last week where observant Greeks can consume meat, there exists “Thursday with Meat Aroma” which is what “Tsiknopempti” literally means.

Since Tsiknopempti (sometimes also known as Burnt Thursday) takes place eleven days before Clean Monday, it is a moving holiday, so expect it sometime in February or early March.

You can think of Tsiknopempti as the Greek national BBQ day! People love to cook meat in the outdoors, among friends and family, dancing and singing, and a lot of beer, ouzo, and other traditional alcoholic drinks flow freely. Opulent dishes with meat, from souvlaki to steaks to sausages cooked in various ways are in the center of attention.

So much so, that a general whiff of meat cooking saturates the atmosphere in urban areas as well as villages and restaurant blocks, from which the day gets its name.

Easter in Greece is a huge holiday, often considered more important than Christmas. Easter in Greece takes place over the whole seven days of the Holy Week, plus two (Monday and Tuesday) right after Easter Sunday.

Each day is characterized by very specific traditions that are shared throughout Greece and beyond within the Greeks of the Diaspora, and others that are local in the various regions. Easter in Greece is an experience. You must be part of it to know it, breathe in the fragrances of Spring and incense, feel the sense of community that is achieved for a few precious days, and partake in the rituals and partying that are part of traditions full of symbolism and ritual.

Dye eggs crimson and red on Good Thursday, walk with the faithful during the procession of the Epitaph on Good Friday, hurry early in the morning for the Early Resurrection on Good Saturday and at midnight for the big announcement with the outdoors mass and fireworks, and be part of the great feast and partying that is Easter Sunday!