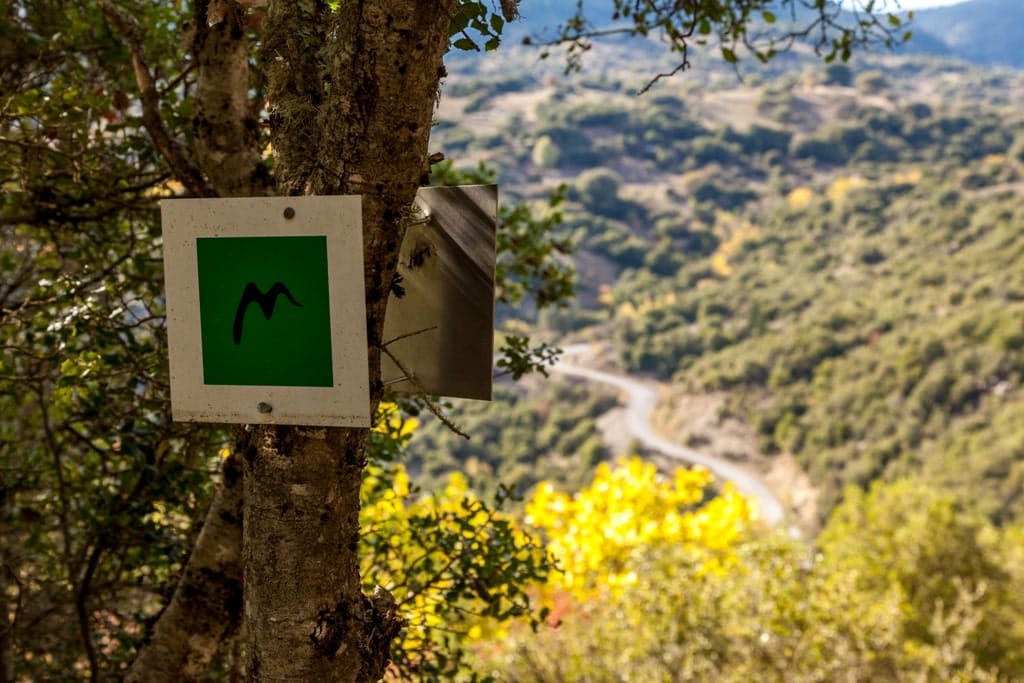 The mountainous landscapes of Greece offer themselves hiking adventures for off-the-grid nature enthusiasts, eager to explore remote places, create new paths, marvel at unspoiled nature. There are many hiking destinations, and a variety of routes, from easier paths suitable for family excursions to more challenging ones, perfect for experienced hikers. Here are 8 of the best-hiking destinations in Greece:

8 Best Hikes to Do in Greece

Samaria Gorge, near Chania, with a length of 16 km is also known as the longest in Europe! It is part of the White Mountains National Park of Crete, situated at 1,200m in altitude with over 450 species of flora and fauna, some of which are endemic to Crete only.

The most well-trodden path lasts for 6 to 8 hours, going downhills from the top all the way to the shores of Crete. The first stop along the way is the Church of Saint Nicolas, which is an architectural palimpsest, built on the remnants of an ancient temple.

Next on you will find the small traditional village of Samaria, which gives the name to the gorge. As you descend, you will then pass through Portes, known as Iron Gates by locals and visitors alike. You can marvel at the steep cliffs looming over this narrow passage of the gorge.

Along the way, apart from the unspoiled wild nature of Crete and the fresh and potable water that runs from water springs around you, you may also enjoy the view over Venetian ruins of castles and other settlements of extreme historical value from prehistoric periods onwards.

Another highlight of this hike is the wild goats, native to Crete only, named “kri kri”, usually hiding to avoid contact but ever-present. Keep a lookout and you may spot some!

The last stop of this route is Agia Roumeli, which has taverns and amenities after the long hike and access to Chora Sfakion via a ferry line.

Tip: Even though the gorge runs downhill and there is no climbing involved, consider wearing comfortable footwear suitable for rough terrain.

A breathtaking gorge is located just 30 km outside Ioannina, in the Zagori region of the Pindus mountain range. It is actually known as the second deepest in the world, after the Grand Canyon, as its steep cliffs at times go as high as 1,000m in altitude, looming over the beautiful landscape.

In the middle of the canyon flows the river Voidomatis, crossing the narrow passages of the gorge. The canyon is a part of The Vikos-Aoos National Park, one of the most beautiful Greek national parks, which consists of the river Aoos, some villages known as Zagorochoria, and Mount Tymfi.

The area is ideal for all kinds of outdoor activities including, hiking, rock climbing, mountain-biking, white-water rafting, the latter, especially in the Voidomatis river.

The most known trail starts at the village of Monodendri, with its arched bridges made of stone, decorating the river.  It is well-marked and discernible, always on the left side of the river bank as you descend. It is approximately 15 km long and downhill. Along the way, you can stop to enjoy the Voidomatis springs, where you can get running freshwater enjoying the view, and catching your breath.

The overall descend will take you approximately 6 hours.

Tip: If you wish to try white-water rafting, the spot with facilities is 1.5 to 2 km outside the village of Aristi.

The mountain Olympus, a place of immeasurable beauty, was also home to the Ancient Gods of the Pantheon according to the myth.  Its highest peak, Mytikas proudly stands at an altitude of 2,917 meters, making Olympus the highest mountain in Greece.

It serves as the natural border of Macedonia and Thessaly, rich in flora and fauna, and due to this natural biodiversity, it is also a National Park and a World Biosphere Reserve. There are over 50 peaks and deep gorges along steep slopes, with breathtaking views.

Ascending to the peak is not an easy attempt, it surely requires some physical fitness and preparation, but there are various refuges around the mountain with trails of different levels of difficulty.

Most of the trails begin from the village of Litochoro, situated at the foothills of the mountain, and approximately 100 km outside of Thessaloniki. The most common path is E4, which starts at Litochoro, goes all the way through Enipea Canyon and its breathtaking waterfalls and Prionia, ending at the refuge of Spilios Agapitos at 2100 meters in altitude.

Tip: Do not stray from the designated paths and trails if not accompanied by an expert or a guide. It can prove quite dangerous.

One of the most picturesque spots of Greece, that looks straight out of a fantasy novel, is Dragon Lake of Tymfi, or Drakolimni in Greek. Situated at the Aoos National Park, on Mount Tymfi at 2000m, this breathtaking alpine lake inherited its name from the local legends that wanted the lake to be home to dragons.

High up the mountain, and near its peak, you will find a stretch of serene water with two edgy cliffs shaped as peaks. Below, you will find the shocking view of the rest of the mountain and the river Aoos. The Dragon Lake has for centuries been a raw, untouched ecosystem with endemic species of the lake such as the Alpine Newt.

A common hiking trail sets off from the stunning village of Mikro Papingo, and with 4 hours of hiking, you will get to the wonderful lake.  Alternatively, you can reach the refuge Astrakas, from which you can then hike for about an hour to reach the lake.

Tip: There are other alpine lakes named Dragon lakes, especially one considered a twin lake on Mount Smolikas, the second-highest mountain of Greece.

In the historically rich Arcadia of Peloponnese, you can find the first ERA-certified trail in Greece. The so-called Menalon trail consists of 8 smaller trails and spreads throughout the region. It is one of the most high-rated hiking trails in Greece. The overall trail is 75 km long, exploring most of the villages and towns of the prefecture of Gortynia.

The sections offer a variety of opportunities, either to explore nature and biodiversity or to get to know about the historical and cultural heritage of the region. The trails also vary in difficulty, length and distance, so make sure to find one that suits your taste and abilities.

An overview of the sections of the Menalon trail :

Read more about the trails here.

In the region of Kalabaka of Thessaly, there are peculiar rock formations called “Meteora”, whose name means “soaring rocks.” These rock pillars have Eastern Orthodox monasteries on top, presiding over an other-worldly scenery of exquisite beauty.  The area is protected as a UNESCO World Heritage Site.

There are hiking routes that explore the wider region, including the trail of moderate difficulty from Kastraki – Megalo Meteoro – Varlaam – Rousanou – Agios Stefanos – Agia Triada. It is about 12 km long and lasts 5-6 hours according to the pace. The elevation is at 600m and the path is circular.

The trail allows you to enjoy the glorious landscape around, with amazing views over the valley and the pillars, and it passes through three of the monasteries.

Tip: Keep in mind that most of the trail is on-road, so this is not strictly a natural hiking path.

You can explore the volcanic island of Santorini by hiking along a route whose views surpass any expectation. It is a downhill trail from Fira to Oia with a distance of 10 km. It includes approximately 3 hours of hiking along with paved alleyways, streets, or even dirt-road parts and hiking trails.

The path follows on the edge of the caldera, offering an endless Aegean blue view and the opportunity to discover the villages Fira, Imerovigli, and Firostefani, and then reach the popular Oia. It is an easy path, especially since you are descending, although some spots require ascending some hills.

When you finish your hike, you can eat and drink in Oia, as well as experience the world-known sunset and make unforgettable memories.

In the region of Siteia in eastern Crete, you will find the Richtis Gorge, popular as a hiking destination thanks to the magnificent waterfalls almost 20 meters in height. The gorge is part of a protected park, just outside the village of Exo Mouliana.

The river has running water throughout the seasons, making it perfect even during summer for hiking under a tick shade. Lush vegetation and wonderful scenery surround the visitor along the way to the beach near the village Kalavros, where the hike ends.

The hiking trail to cross the gorge s rated easy and lasts up to 4 hours and it starts from the traditional stone bridge of Lachanas from the 19th century.