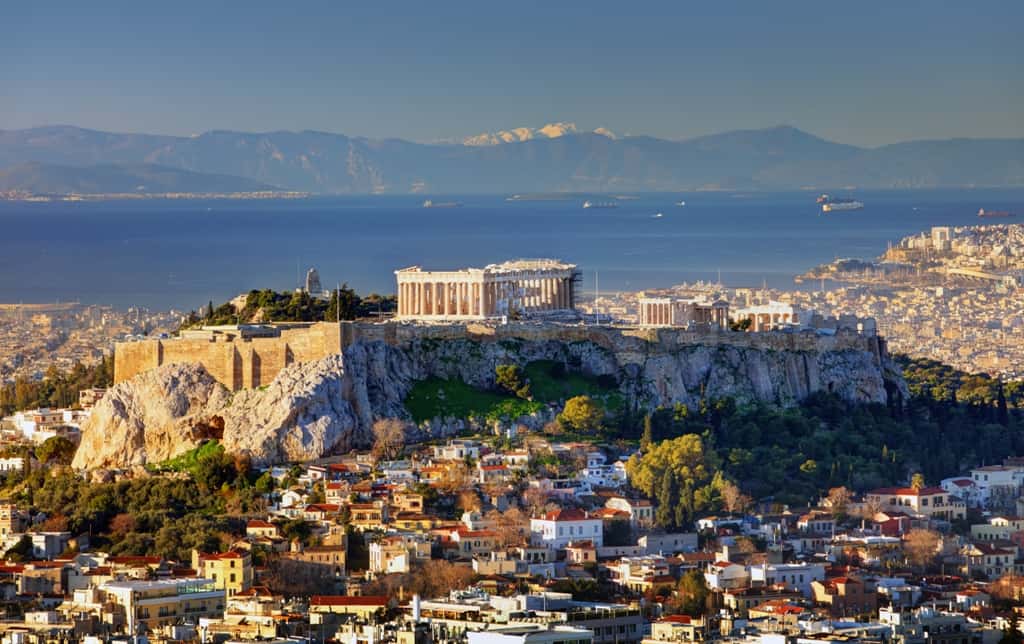 The Greek capital of Athens is built upon seven spectacular hills, all of which have their own fantastic, unique, and compelling history, and brilliant ancient myths associated with them. Whether you are fascinated by the heritage and culture of each hill, or simply charmed by the astonishing views available from each, the hills of Athens should be high on the list of things to do for anybody visiting the city. Here is a summary of everything that you need to know about each of the seven hills:

The Seven Hills of Athens

The famous Acropolis towers above the city of Athens, and is situated on an enormous craggy rock; the upper layer of rock of the Acropolis is believed to be older than the layer beneath. The hill is believed to have been inhabited since the fourth millennium BC, and it has since been the heart of the city; over the centuries, the Acropolis has been inhabited by a string of different groups and religions, but it today stands proudly as a symbol of the ancient world.

The Acropolis represents democracy, classicism, and exquisite architecture, and is one of the most popular tourist attractions today.

Click here for more information on how to visit the Acropolis.

Philopappou Hill is named after Caius Julius Antiochos Philoppapos, a well-connected member of the royal family of Commagene, which was a tiny Helensitic Kingdom from the north of Syria and the south-east of Turkey.

One of the top things to see on Philopappou Hill, or as it is sometimes known, Moussoun Hill, is to visit the Philoppapos Monument; Philoppapos is believed to have been allocated a memorial in such an important spot, as he is likely to have been a key benefactor for ancient Athens.

This Hill is also a great place to visit to explore some wonderful views of the city, particularly of the almighty Acropolis, which towers proudly above the skyline.

One of the most popular and prestigious hills in Athens is Lycabettus Hill, which is where the upmarket district of Kolonaki is situated, with its high-end designer shops, luxury restaurants, and immaculate streets. This is the second-highest point in the city, and you can reach the top via the Lycabettus Funicular, which has been in place since the year 1965, or you can follow the path uphill. From the top of the hill, you can take in the impressive panoramic views of Athens.

On top of the hill lies the fantastic St George Church, which is a must-see attraction; it dates back to 1870, and is a stunning whitewashed structure. Another brilliant attraction to explore on Lycabettus Hill is the Lycabettus Open Theatre, which is an enormous structure that was built in 1964 on the site of a quarry; there are many performances of ancient dramas held here, making it a fantastic place to experience some culture.

A great way to end your trip to Lycabettus Hill is to have dinner at Orizontes restaurant, which is an unforgettable restaurant overlooking the beautiful city of Athens, offering views of the Acropolis and the Saronic Gulf; the food is also delicious.

It is possible to get to Lycabettus Hill via metro; the closest station is Megaro Moussikis, which is a seven-minute walk away.

One of the seven hills of Athens is the Ardittos Hill, which offers unbeatable views of Athens, and in particular, the wonderful Acropolis. Ardittos Hill is situated next to The Panathenaic Stadium, which is constructed upon the site of an older, ancient stadium; this is a classical and highly popular monument, that is long associated with the modern Olympic Games.

Its origins date back to the 4th-century BC and have seen a huge amount of architectural and structural changes throughout the centuries. Another fantastic attraction near to the Adrittou Hill is The Temple of Olympian Zeus, otherwise known as the Olympieion, which is a historic Greco-Roman temple, that was originally constructed in the 6th-century BC.

It is possible to get to Ardittos Hill via the metro, and the closest station to the sites is Syntagma Metro Station.

You might want to check out: The best views of Athens.

In the heart of Athens is the beautiful Pnyx Hill, which has famously been inhabited as early as 507 BC; offering panoramic views of the city, including the almighty Acropolis, Pnyx Hill was a historic hub of religious activity, and is frequently regarded as the birthplace of modern democracy; Athenian men would gather upon the hilltop to discuss political and social issues, as equals.

In the 1930s, an enormous excavation was undertaken on the hill, and it was at this point, that a sanctuary dedicated to Zeus Hypsistos, the Healer, was discovered. Pnyx Hill has so much history and culture attached to it, and it is one of the most popular sites in the city; it is gorgeous at all points of the day, though it is particularly spectacular and atmospheric at sunset and in the early morning.

It is possible to access Pnyx Hill via the metro; the closest stop is the Acropolis, which is approximately a 20-minute walk away or Thissio metro stop.

Areopagus Hill is an enormous rocky outcrop, that is situated to the north-west of the Acropolis, and offers unbeatable panoramic views of the city, and in particular, the magnificent Ancient Agora and the Acropolis. The hill gets its name from the time in which Area once stood trial; over its history, the hill has been used for a string of different functions, such as by the Council of Elders, who used the hilltop as a meeting place, between the ears 508 and 507 BC.

Later, during the Roman period, the hill became known as the ‘Mars Hill’, as this was the name of the Greek god of war. Today, the hill is popular with tourists, because of the immense amount of history and culture that is associated with it, and also, for the impressive views across the city.

It is possible to get to Areopagus Hill via metro, the closest station is Acropolis, which is around a 20-minute walk away.

Nimfon Hill, or as it is also known as, the Hill of the Nymphs, is situated in the heart of the city, opposite the Acropolis. This is hill is a great spot for keen walkers and hikers, are it is actually connected to Aeropagus Hill and The Philoppapos Hill with walking paths; from the top, you will also be able to see breath-taking panoramic views of Athens and the Acropolis.

Furthermore, the National Observatory of Athens is situated upon Nimfon Hill, where you can soak in the beauty of the Athenian sky at night time; there are evening tours available, where visitors can take a peek through the 8-meter dome of the Doridis telescope.

It is possible to get to Nimfon Hill via the metro; the closest stop is Thissio Metro Station, which is approximately a 7-minute walk away.

See how you can visit the hills of Athens with our Athens itineraries.

The seven hills of Athens have stood the test of time; from their early existence as hubs of religious, legal, and social purposes, they still remain extremely important to this day, showcasing insights into the past, the present, and the future.

1 thought on “Hills of Athens”